Note: As Rorate has argued since day one of the first Synod -- Francis is leading the destruction of the family and the defiance of the words of Jesus Christ Himself. We've been told, also since day one, that we would be proved wrong, by laymen, priests and prelates. This is one time we wish they were right and we were wrong, but alas ... 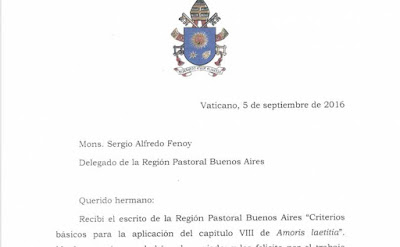 September 9, 2016 (LifeSiteNews) — In a letter reportedly leaked by a priest in Argentina, Pope Francis writes that there is “no other interpretation” of Amoris Laetitia other than one admitting divorced and remarried Catholics to Holy Communion in some cases. The letter, dated September 5, comes in response to a confidential document by the bishops of the Buenos Aires pastoral region to priests instructing them on the application of the Pope’s controversial apostolic exhortation. LifeSite has acquired copies of both original documents and has provided professional side-by-side translation.
The Spanish original of the letter from the Pope is here
The Spanish original of the bishops’ directive is here
LifeSiteNews’ translation of the Pope’s letter is here
LifeSiteNews’ translation of the bishops’ directive is here
Read more »