MEDIATOR DEI ENCYCLICAL OF THE VENERABLE POPE PIUS XII ON THE SACRED LITURGY : Considering their special designation to perform the liturgical functions of the holy sacrifice and divine office, the Church has serious reason for prescribing that the ministers she assigns to the service of the sanctuary and members of religious institutes betake themselves at stated Times New Roman to mental prayer, to examination of conscience, and to various other spiritual exercises 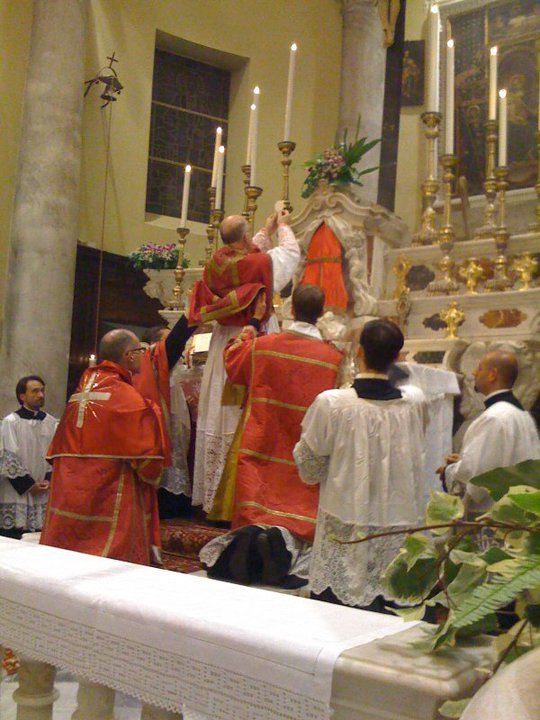 
36. In the spiritual life, consequently, there can be no opposition between the action of God, who pours forth His grace into men's hearts so that the work of the redemption may always abide, and the tireless collaboration of man, who must not render vain the gift of God.[36] No more can the efficacy of the external administration of the sacraments, which comes from the rite itself (ex opere operato), be opposed to the meritorious action of their ministers of recipients, which we call the agent's action (opus operantis). Similarly, no conflict exists between public prayer and prayers in private, between morality and contemplation, between the ascetical life and devotion to the liturgy. Finally, there is no opposition between the jurisdiction and teaching office of the ecclesiastical hierarchy, and the specifically priestly power exercised in the sacred ministry.
37. Considering their special designation to perform the liturgical functions of the holy sacrifice and divine office, the Church has serious reason for prescribing that the ministers she assigns to the service of the sanctuary and members of religious institutes betake themselves at stated Times New Roman to mental prayer, to examination of conscience, and to various other spiritual exercises.[37] Unquestionably, liturgical prayer, being the public supplication of the illustrious Spouse of Jesus Christ, is superior in excellence to private prayers. But this superior worth does not at all imply contrast or incompatibility between these two kinds of prayer. For both merge harmoniously in the single spirit which animates them, "Christ is all and in all."[38] Both tend to the same objective: until Christ be formed in us.[39]
38. For a better and more accurate understanding of the sacred liturgy another of its characteristic features, no less important, needs to be considered.
39. The Church is a society, and as such requires an authority and hierarchy of her own. Though it is true that all the members of the Mystical Body partake of the same blessings and pursue the same objective, they do not all enjoy the same powers, nor are they all qualified to perform the same acts. The divine Redeemer has willed, as a matter of fact, that His Kingdom should be built and solidly supported, as it were, on a holy order, which resembles in some sort the heavenly hierarchy.
40. Only to the apostles, and thenceforth to those on whom their successors have imposed hands, is granted the power of the priesthood, in virtue of which they represent the person of Jesus Christ before their people, acting at the same time as representatives of their people before God. This priesthood is not transmitted by heredity or human descent. It does not emanate from the Christian community. It is not a delegation from the people. Prior to acting as representative of the community before the throne of God, the priest is the ambassador of the divine Redeemer. He is God's vice-gerent in the midst of his flock precisely because Jesus Christ is Head of that body of which Christians are the members. The power entrusted to him, therefore, bears no natural resemblance to anything human. It is entirely supernatural. It comes from God. "As the Father hath sent me, I also send you [40]. . . he that heareth you heareth me [41]. . . go ye into the whole world and preach the gospel to every creature; he that believeth and is baptized shall be saved."[42]
41. That is why the visible, external priesthood of Jesus Christ is not handed down indiscriminately to all members of the Church in general, but is conferred on designated men, through what may be called the spiritual generation of holy orders.
42. This latter, one of the seven sacraments, not only imparts the grace appropriate to the clerical function and state of life, but imparts an indelible "character" besides, indicating the sacred ministers' conformity to Jesus Christ the Priest and qualifying them to perform those official acts of religion by which men are sanctified and God is duly glorified in keeping with the divine laws and regulations.