7 years of RORATE CÆLI - and a special gift: An essay on Modernism by Don Pietro Leone


Today is Rorate Sunday, the Fourth Sunday in Advent, and a very special day for us: it is the seventh anniversary of this web log, founded on this same Sunday, 2005, and named after its introit - recurrent words throughout Advent, from its very first liturgical moment (First vespers of the First Sunday). It is a perfect day, then, for us to present a special essay on Modernism and why its presence is so strong in our days - by Don Pietro Leone Monselice, the pen name chosen by a traditional Catholic priest, whose solid work on the Traditional Roman Rite and the Pauline Rite we happily published in 2011. 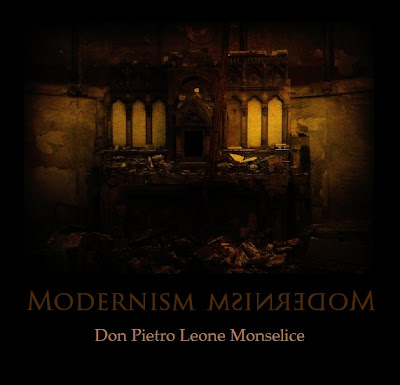 In his book “Athanasius”, Bishop Rudolf Graber, of Regensburg, explains how the Evil One in the course of the ages has attacked the Holy Catholic Church in ways increasingly refined, insidious, and intimate. He began by attacking the faithful through persecutions, but seeing that these lead rather to an increase of the Faith, he adopted another method: that of attacking the Faith itself.


What is Modernism? Saint Pius X defines it in his encyclical Pascendi as “the synthesis of all heresies”. The Code of Canon Law (CIC. 751) defines heresy as: “the obstinate denial, after receiving baptism, of a truth which is to be believed by Divine and Catholic Faith, or the obstinate doubt concerning it…”


For the purposes of this essay we shall understand ‘heresy’ in a wide sense, as the obstinate denial of any traditional Catholic doctrine (or the obstinate doubt in its regard).


First of all, we will present two particular characteristics of Modernism: 1. Ubiquity; 2. Obscurantism.

I The Characteristics of Modernism

Ubiquity concerns the extension of the heresy.


In the past the Church always condemned heresies, and took this opportunity to formulate Her doctrines more profoundly and more clearly. Consequently, the rotten, heretical, branch of the Church was cut off from its healthy trunk; and the healthy trunk, nurtured by a new influx of the light of Truth, was able to flourish yet more gloriously than before.


For the past fifty years, by contrast, the heresies of Modernism have no longer been condemned; or if they have been condemned, they have been but seldom, feebly, and without sanctions. As a result almost the entire tree of the Church has by now been infested by error.


This infestation takes its cue from the Magisterium itself, from the teaching of the Church: of the hierarchy and the clergy. This said teaching constitutes an illegitimate use of the munus docendi entrusted to the Church by Our Lord Jesus Christ: a use illegitimate and therefore a use that also exceeds the competence of those who exercise it: a use that is extra vires.


At this point we observe that we understand the term ‘Magisterium’ as the organ or instrument of the munus docendi of the Church, and we distinguish two senses of the term: a positive sense which refers to its legitimate exercise; and a neutral sense, which is the sense in which we will understand it in this essay, which refers to its exercise simpliciter, without specifying if it is legitimate or illegitimate. That the Magisterium may be exercised in an illegitimate way, will be demonstrated by the examples given below. This is obvious, and may be denied only by an ideologist.


Modernism inside the Church is difficult to combat for various reasons:


-it is difficult to discern inasmuch as it is ubiquitous or omnipresent - Jacques Maritain speaks of ‘immanent apostasy’. This signifies that it has become part of the very fabric of the Church Herself, or, using another image, it has become too vast even to see;


-it is difficult to understand because it is obscurantist (as we shall show it in the next section);
-it is difficult to evaluate since in order to evaluate it, theological knowledge is required which is no longer taught in seminaries or in parishes, or at least not exclusively so taught;
-it is difficult to accept because it requires intellectual honesty and courage, which are necessary to face the doctrinal devastation in the Church today;
-it is difficult to criticize, above all for a priest, because he will be regarded not only as ‘hard’, but also as ‘lacking in piety’ or even ‘schismatic’ (or ‘crypto-schismatic’) towards the Church, the Pope, and the Magisterium (understood in the first sense of the term); and will have to steel himself for some mauvais quarts d’heure with his Superior or Bishop, and perhaps even the loss of his apostolate.

II The Consequences of Modernism