The Italian Debate About Continuity, Rupture and the Second Vatican Council 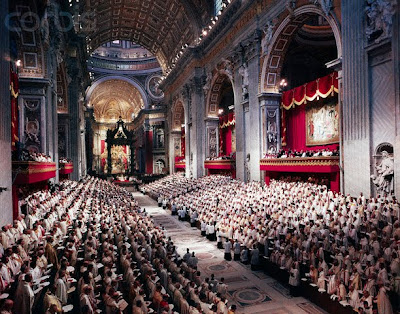 I have been following with great interest some of the recent entries of Sandro Magister on the debate occurring within Italian circles at the present moment about the Second Vatican Council and the question of continuity and rupture.

Key players in the debate as featured by Magister have been Cardinal Giacomo Biffi (archbishop emeritus of Bologna), Archbishop Agostino Marchetto (former secretary of the Pontifical Council of Migrants and author of The Second Vatican Ecumenical Council: A Counterpoint for the History of the Council), Inos Biffi (professor emeritus at the theological faculties of Milan and Lugano), Canon Brunero Gherardini (a canon of St. Peter's Basilica, professor emeritus of the Pontifical Lateran University and author of two works at the heart of this debate, Concilio Vaticano II: Un Discorso da Fare and now Concilio Vaticano II: Il Discorso Mancato) and Professor Roberto de Mattei (of the European University of Rome and author of Il Concilio Vaticano II: Una Storia mai Scritta).

In recent weeks, Magister has run two further articles which pertain to this debate: High Up, Let Down by Pope Benedict (which contains a sort of summary of the various positions and figures as well as an article "On Continuity" by Francesco Arzillo) and The Disappointed Have Spoken. The Vatican responds (which contains Inos Biffi's "Conciliar Rereadings", a review of Gherardini's book taken from "L'Osservatore Romano", April 15).

Without the benefit of full access to all of the Italian texts (namely the writings of Gherardini and de Mattei themselves), and accordingly relying on the summaries and responses we are given, my sense is that the crux of the matter is the question of whether the documents of the Second Vatican Council are themselves in continuity, but either falsely interpreted, understood or enacted in rupturous ways (and thus no fault of the documents themselves), or whether the very documents of the Council itself have (or at least potentially have) elements of rupture within them that stand in need of clarification or correction.

For example, Magister tells us that at the end of Gherardini's book, it "concludes with a 'Plea to the Holy Father.' He is asked to have the documents of the Council reexamined, in order to clarify once and for all 'if, in what sense, and to what extent' Vatican II is or is not in continuity with the previous magisterium of the Church." The same book carries a preface by then Archbishop Malcolm Ranjith (now a Cardinal) as well as Bishop Mario Olivieri of Albenga-Imperia, the latter of which fully joined in Gherardini's call for such re-examination Magister tells us.

The nuances of the debate are rather interesting, because within them, there is also a shared acceptance that the postconciliar era sees problems.

For example, Magister tells us that while "Inos Biffi has strong criticism for Gherardini's theses... he also recognizes their merits." He continues:

And he [Inos Biffi] himself does not fail to criticize some aspects of the conciliar event. He does so by enlisting an authority of the stature of Cardinal Giacomo Biffi, with whom he shares a last name – without any relation – but above all ideas.

The criticisms of the two Biffis, Giacomo and Inos, of the conciliar event concern its "pastoral" nature, the refusal to condemn errors, the ambiguities of "aggiornamento."

The difference lay in the fact that "...in their view [Giacomo and Inos Biffi], the documents produced by Vatican II are nonetheless 'not guilty' of the subsequent deviations. And in this, their view diverges distinctly from that of Gherardini and other traditionalists." [Traditionalists here referring to Professor de Mattei, and no doubt also the SSPX with their position on documents like Dignitatis Humanae, etc.]

Simiarly, while Cardinal Biffi and Archbishop Marchetto would critique aspects of de Mattei's and Gherardini's theses about the substance of the conciliar documents themselves, both have at the same time come out publicly critiquing the rupturous Bologna School interpretation; Biffi in his critique of Giuseppe Dossetti, and Marchetto, of course, in his own book on the subject -- not to mention various articles. (And of course, the key here lay in the fact that this is a critique of interpretation.)

Evidently there are some substantial differences here which are very important -- and they are debates which lay at the heart of the differences we can witness in the English speaking context as well. However, what strikes me are also the similarities and shared points. Whereas the Bologna school seems to have substantially ruled the day in these decades since the Second Vatican Council, what is common here is the growing recognition of a problem of rupture that is to be found in the Church today; a recognition which is growing ever more mainstream and which will surely only increase as newer generations continue to take their place.

This bodes well and this debate about the precise root cause should be fostered and encouraged -- with civility and intelligence of course. Indeed, we can recall that at a recent conference in Rome (Concilio Ecumenico Vaticano II: Un Concilio Pastorale, Analisi Storico, Filosofico, Teologica) organized by the Franciscans of the Immaculate, Gherardini, de Mattei and Marchetto each spoke on this topic, and it was here too that Don Nicola Bux and Bishop Athanasius Schneider also joined the discussion, the latter of which made the now well known proposition that a new syllabus of errors pertaining to a rupturist view of the Second Vatican Council be considered.