Pope appoints youngest bishop in US to Detroit archdiocese 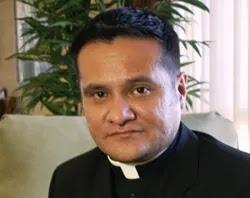 Bishop-elect Jose Auturo Cepeda
Detroit, Mich., Apr 18, 2011 / 04:12 pm (CNA/EWTN News).- Pope Benedict appointed Texas priest Jose Auturo Cepeda as an auxiliary bishop of Detroit. At the age of 41, he will become the youngest bishop in the U.S.
Bishop-elect Cepeda currently serves as the rector of Assumption Seminary in San Antonio and is the third in a recent round of newly appointed auxiliary bishops for the Archdiocese of Detroit.
Upon news of his appointment on April 18, the bishop-elect – who has never visited the city outside of its airport – expressed excitement over his upcoming move.
“I will learn much from the Church of Detroit,” he said on Monday. “God is the One who does all the work and gives us all the grace we need. All we need to do is say 'yes,' just like Mary. That's my attitude.”
Bishop-elect Cepeda will join Bishop-elects Monsignor Donald Hanchon and Michael Byrnes in being ordained bishops on May 5 at the Cathedral of the Most Blessed Sacrament.
Archbishop Allen H. Vigneron welcomed the appointment and said that the new bishop-elect “comes to us with an apostolic mission to use all of his many gifts and talents for the service of the whole People of God in Southeast Michigan – with particular attention to that portion of our family which is Hispanic.”
“He is a true son of Our Lady of Guadalupe,” Archbishop Vigneron added. “I know she will help him to share his gifts with us, so that all of us – from so many diverse cultures – will share our gifts of grace with one another.”
Born in San Luis Potosi, Mexico, Bishop-elect Cepeda came to the U.S. with his family at the age of 19, having already started his discernment for joining the priesthood. He was ordained a priest in 1996 at his home parish of St. Mary Magdalen in San Antonio.
After serving as associate pastor of San Antonio's San Fernando Cathedral for four years, he then attended St. Thomas Aquinas Pontifical University in Rome, where he earned a licentiate and a doctorate in sacred theology.
Since returning to San Antonio, he has taught at Assumption Seminary and was made rector in 2010. He has also served as vocations director for the archdiocese and his ministry also included hosting a bi-lingual talk show on Catholic Television of San Antonio.