Communion in the Hand is a Calvinist Novelty 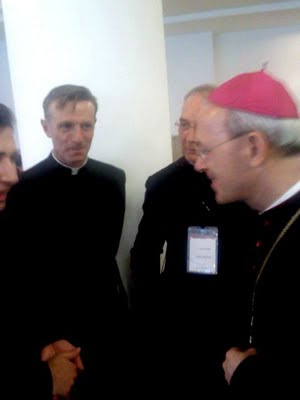 I was fortunate enough to meet Bishop Athanasius Schneider recently and he is one of those people who make an impression. Not through his physical presence - he is not a tall man. Not through force - he is quietly spoken and gentle. But when explaining the Faith, he doesn't give away much ground - none at all, in fact. He is kindly and interested when you speak to him but I wouldn't like to skim over anything in the Confessional - the kindly eyes might look intensely at you and you'd feel the need to tell the full story! In other words, whether he has special gifts in the Confessional or not, he is a holy man. Something in his presence tells you so and demands attention. Hence, I am very interested in what he says. The following was picked up from the Eponymous Flower.
I've posted about Bishop Schneider before here.

Cardinal Canizares has also become an eloquent speaker for the more widespread return of this practice. He recommends that Catholics “receive Communion on the tongue and while kneeling.” See here and here and here.


Auxiliary Bishop Says Communion In the Hand is a Calvinist Novelty

Not Even Martin Luther Would Have Done It

In the last century the Old Liberal Bishops promoted hand Communion. They used a historical lie toward this end.
Present day Communion in the Hand has no roots in the early Church.

This was stressed by Auxiliary Bishop Athanasius Schneider of Astana in Kazakhstan on the 19th July on the radio station 'Radio Maria Südtirol'. Mgr Schneider is a Patristic expert.
Hand Communion was contrived "all new" from the Second Vatican Council -- the Auxiliary Bishop firmly said. The ancient Church had practiced a completely different form for the reception of Communion. In that period the hand in which Communion was received was purified before and after.

Additionally, the faithful would take the Body of the Lord from their hand in a disposition of prayer with his tongue. "If anything it was more of an oral reception of Communion than in the hand". After Communion, the communicant had to lick their hands with their tongues, so that even the smallest particle should not be lost. A Deacon supervised the purification.

The Auxiliary Bishop cotinued: "This concern and care stands in direct opposition to indifference and carelessness with which so called Communion in the hand is dispensed." Women never held Communion simply on the flat of the hand. They spread a white cloth, a manner of corporal over their hand. Then, they would receive Communion directly to their mouth from the linen cloth.

"That is a tremendous contrast to the present form of Communion in the hand" -- insisted Mgr Schneider. The ancient faithful never took Communion with their fingers: "the gesture of hand Communion was completely unknown in the Church."

In the course of the centuries the Church developed a form of giving Communion which "surely came from the Holy Ghost". Msgr Schneider explained that the Eastern Church had already completed this step by the 5th Century, the West somewhat later. The transition took place worldwide, organically, instinctively and peacefully. The Bishop reports that Pope Gregory the Great († 604), gave Communion on the tongue. French and Spanish Synods of the 8th and 9th Centuries sanctioned against touching the Host with excommunication: "If a Synod can make such a strict threat, this form will be forbidden in a short time."

Communion in the Hand Comes from the Calvinists

According to the Bishop, communion in the hand comes from the Dutch Calvinists of the 17th Century. Calvinism denies the real presence of Christ in the Host. Communion in the hand wasn't even practiced by the Lutherans: "The Lutherans have until quite recently, and till today in Scandinavian lands, preserved communion kneeling and on the tongue."
http://offerimustibidomine.blogspot.com/