Mons. Gherardini's new book: Vatican II: at the roots of a misunsderstanding

Mons. Brunero Gherardini's new book, "Il Vaticano II: Alle radice d'un equivoco" ("Vatican II: at the roots of a misunderstanding": Turin, Lindau, 2012, 410 pages), is being released in Italy. Below, a translation of the final portion of its prologue, as Gherardini presents, in his unmistakable tone, the reason for the publication of this volume, the latest in a series of studies on the problems of Vatican II, its documents, and its contradictions with Sacred Tradition. 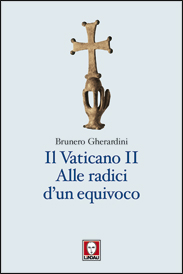 The new generation, either of bishops and priests, or of simple lay faithful, is often placed off-limits [regarding the questioning of conciliar elements incongruous with Tradition], and even reacts by assuming the position of "defensor fidei" - that is to say, of Vatican II - when anyone dares to raise some question on the continuity of the latter with the original doctrine. A half-century of uninterrupted hammering does not go by in vain, that is, not without the bitter fruits "of ash and venom".

These are fruits that are made even bitterer by the silencing - in practice, even if not formally imposed - of a Tradition that crossed the length of twenty centuries before someone blocked its course, in the name of Vatican II, as a "petrified" reality, as an "incomplete and contradictory" ecclesial value.

There remains truly the fact that neither Vatican II can be recognized fully and peacefully in it [Tradition], nor can it be harmonized with the tune of Vatican II. They are two scores that cannot be reciprocally harmonized with the "dominant", not due to any accidental note, but because one is intrinsically different from the other; and at times even opposed.

I will have no difficulty with finding, document after document, all the "alterities", and in particular the antitheses, of the aforementioned scores. The list would involve entire documents, such as GS [Gaudium et spes], DH [Dignitatis humanae], UR [Unitatis redintegratio] and N ae [Nostra aetate], alongside peculiar points and doctrines: for example, the incarnation of the Word in every man, the "subsistit in", the collegiality of the bishops under the structure not of the "corpus episcoporum", but of the organism of universal governance of the Church, incomplete communion, the Church of Christ as a sum of churches or of ecclesial communities. This is not the point. Or not the one to which the present publication is dedicated. Even though the development of my reasoning will not be able to completely avoid recalling this or that particular Conciliar "alterity" faced with the uninterrupted Tradition of the Church, the reason for which I write is related not to the list of the mentioned "alterities", but rather with the intent of proving the unfoundedness of the objections raised either against myself or against those who think like me, and with the central concept on which such objections depend. Already in the title I call this idea a "misunderstanding". I proceed to prove it.