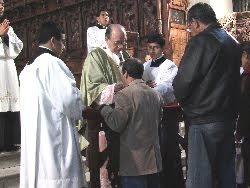 One of our readers is reporting to us that the Cardinal Archbishop of Lima, Peru, Juan Luis Cardinal Cipriani -- whom we have featured here before in relation to his promotion and following of the Holy Father's example as regards the distribution and reception of the holy communion on the tongue -- has further taken up the practice in his Cathedral of, not only of distributing communion on the tongue, but also kneeling.

Our reader reports that for this purpose kneelers are being put before the steps of the altar, as per the practice at papal masses. ( See above right )

The original report may be found on the site of the Archdiocese, dated Sept. 20th, under the title of "We need to regain respect for the Holy Eucharist": Hay que recuperar el respeto a la Santa Eucaristía .