BISHOP SCHNEIDER AND THE LITURGY: MILESTONES FOR THE THIRD MILLENNIUM 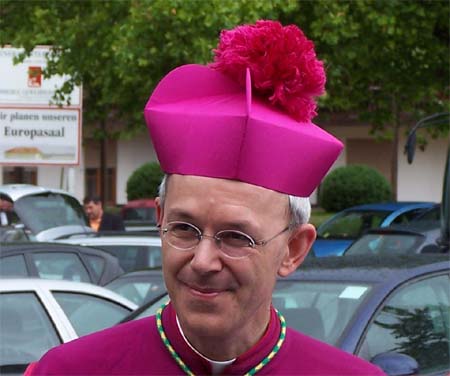 On 15 january 2012, the Parisian association Réunicatho, which came into being shortly after the motu proprio Summorum Pontificum, held its fourth meeting for Catholic unity. We here present an unabridged translation of the keynote address given by the conference's guest of honor, Bishop Athanasius Schneider, on the theme of "The Extraordinary Form and the New Evangelization."

Bishop Schneider, who is auxiliary bishop of the archidiocese of Saint Mary of Astana and Secretary of the Kazakhstan Conference of Catholic Bishops, is the author of Dominus Est - It is the Lord!, Reflections of a Bishop of Central Asia on Holy Communion, published by Newman House Press.

(headings added by the editors)

I –Turning our gaze towards Christ

In order to speak of new evangelization correctly, it is necessary first to turn our gaze towards Him Who is the true evangelizer, namely Our Lord and Saviour Jesus-Christ, the Word of God made Man. The Son of God came upon this earth to expiate and redeem the greatest sin, sin par excellence. And this sin, humanity's sin par excellence, consists in refusing to adore God, in refusing to keep the first place, the place of honor, for Him. This sin on the part of man consists in not paying attention to God, in no longer having a sense of the fittingness of things, or even a sense of the details pertaining to God and to the Adoration that is His due, in not wanting to see God, in not wanting to kneel before God.

For this reason Jesus the Eucharist, God incarnate, present in the tabernacle under the Eucharistic form, is set aside. Even the representation of the Crucified One on the cross in the middle of the altar during the celebration facing the people is an embarrassment, for it might eclipse the priest's face. Therefore the image of the Crucified One in the center of the altar as well as Jesus the Eucharist in the tabernacle, also in the center of the altar, are an embarrassment. Consequently, the cross and the tabernacle are moved to the side. During mass, the congregation must be able to see the priest’s face at all times, and he delights in placing himself literally at the center of the house of God. And if perchance Jesus the Eucharist is still left in His tabernacle in the middle of the altar because the Ministry of Historical Monuments—even in an atheist regime—has forbidden moving it for the conservation of artistic heritage, the priest, often throughout the entire Eucharistic celebration, does not scruple to turn his back to Him.read...