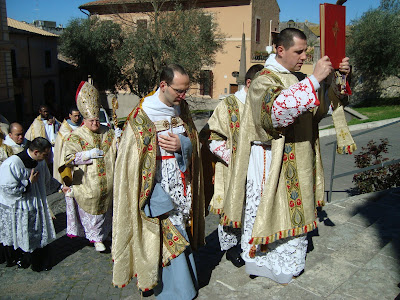 Paix Liturgique, in its newest Italian newsletter, has an interview with Fr Alessandro M. Apollonio, rector of the theological seminary of the Franciscans of the Immaculate (FFI), which brings splendid news from this young order which now has more than 700 members. Here is a translation of the part concerning the liturgy:

The vocation of a seminary is to give priests to Holy Church. This year eight of your friars will be ordained in Florence, on the Feast of the Annunciation, 25 March. Last year, the ceremony took place at Tarquinia and, for the first time in the history of your institute, the sacrament of orders had been conferred on five of your friars according to the Extraordinary Form of the Roman Rite. Monsignor Burke, Prefect of the Apostolic Signatura, officiated. This year Cardinal Rodé, another prelate of the Curia, Prefect of the Congregation for Institutes of Consecrated Life and Societies of Apostolic Life, will be the celebrant. Again, the Pontifical Mass will be accordiing to the older form: can we conclude that the Extraordinary Form of the Roman Rite now becomes the ordinary manner of your ordinations to the priesthood?

Yes, as long as the Pope allows it, in the sense of being the preferred form, not the exclusive.

Allow me to interpret the thought of our superior, Father Manelli ... Since the Extraordinary Form is the liturgical form closest to our spirituality, as long as the Pope allows this, we will prefer the ancient rite for our ordinations. Of course, if tomorrow we have to ordain some friars directly in Africa or the United States and the bishop prefers to celebrate according to the Novus Ordo, the ordinations will be according to the modern liturgy in its most solemn form.

What brings your spirituality particularly close to the ancient rite?

Our Franciscan and Marian spirituality is characterised by its being theocentric, christocentric and mariocentric. God, the God-Man and the Immaculate Coredemptrix are central to our vocation. And, in its sacrificial and mystical dimensions, the traditional liturgy responds really fittingly to this spirituality of ours. There is salvation only in God made flesh in the womb of the Virgin, died on the Cross and risen, and the millennial liturgy of the Church constantly reminds us of this, even in its most subtle details.

If your friars are now entering the priesthood through the ancient rite, it would seem natural that they might enjoy its treasures every day: What is your position on the breviary for example? Can your priests use the traditional one?

Indeed, to accompany the spiritual growth of every single priest and of our religious family as a whole, the traditional breviary is a valuable tool. So much so that in the seminary, for all our functions in choir, it is now the one which we use. For personal reitation or on mission, the friars can however use the breviary of Paul VI.

How far are you along in the implementation of the motu proprio Summorum Pontificum in your houses?

In Italy, the Extraordinary Form is the form of our conventual Masses, recommended by the Father Founder, both for the friars and the sisters, and it is ever increasingly being celebrated in our public ceremonies also in parishes when we have the consent of the bishop. Abroad, things are done according to local needs. For example, in the United States, in order to prudently avoid any kind of confusion, things go at a slower pace than in Italy. However, from Brazil to the Philippines, the Extraordinary Form conquers more and more the souls of our brothers and sisters Franciscans of the Immaculate.