Padre Pio said: "If people knew the value of the Mass, there would be policemen at the door,

to regulate the access to the church, every time a Mass is celebrated" .

Being at five in the morning near the altar of Padre Pio was really a close encounter of the special kind with the supernatural.

The Mass of Padre Pio was a spectacular mystical event, mixing the height of the human complete immolation to God, that we could see,

with a mystical and physical renewal of the Passion of Christ from the Garden to the Golgota, that we couldn't see, but were able to feel. 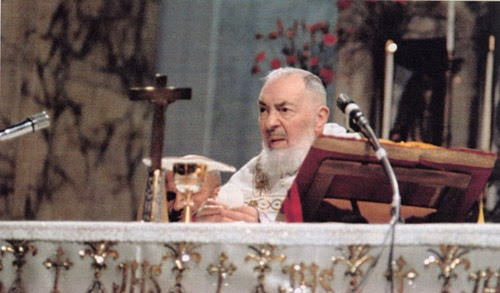 The Mass with Padre Pio 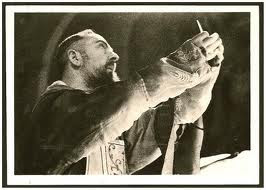 "My Mass  is a sacred accomplishment of the Passion of Jesus.

"In knowing the Passion of Jesus, you will also know my Passion.

"The Mass is the complete union between Jesus and me." 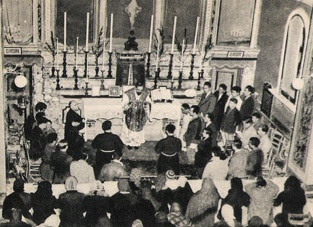 "The angels attend my Mass In legions."

"The Holy Virgin assists me." 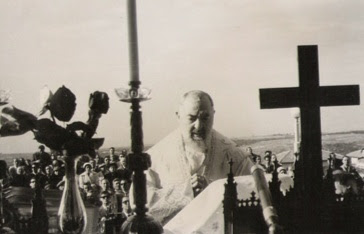 "During the Consecration a new, awesome and wonderful annihilation and creation happens.

"I suffer all what Jesus suffered, from the Garden to the Cross.

"I inadequately suffer to the extent a human creature can possibly suffer. 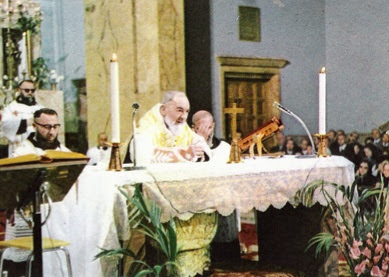 "The sufferings are so acute that they can neither be described nor imagined.

"I suffer the bitterness of gall very often during the Mass.

"I suffer the most from the Consecration to the Communion.

"My suffering is insignificant compared to the  suffering Jesus experienced.

"I don’t want my Calvary to be alleviated; rather to make it harder. We must suffer.

"The offertory is the moment when the soul becomes detached from all that is profane.

"I suffer the crowning of thorns during the Holy Mass and also before and after  it."

"Without the crown of thorns the immolation would not be complete. The thorns are around the whole head.

"The crown of thorns is never taken away.

"The head and the heart are the wound that hurt the most.

"I suffer the scourging from the beginning to the end of the Mass, but more intensely after the Consecration.

"I also speak the "seven words" that Jesus stated on the Cross.

"During the Way of the Cross I am Jesus Himself.

"At the Calvary, there where screams, blasphemies, loud clamor, and threats... that was really an uproar.

in His last gaze the dying Jesus looked towards His Holy Mother.

"In the Communion I ask the Lord to let me be another Jesus, all Jesus, always Jesus.

"My Communion is a fusion. Like two candles that fuse together and cannot be distinguished one from the other.

"I die mystically, at the Holy Communion.The Communion is the culminating point of my suffering.

"How could I live failing even for a single morning to receive Jesus in the Communion?"

"I want to expiate the sins of all, like Jesus did on the cross."

"I take all iniquities on myself,  as it is part of the Divine Sacrifice. 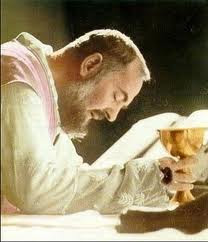 "I see all my children who come to the altar, as if in a mirror.I tell Mary: Here are the children of your Son.

"If we only knew how God regards it, we would risk our lives to be present at a single Mass. 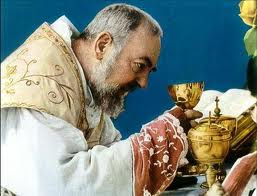 "The fruits that we receive at Mass cannot be enumerated. We will know it only in Paradise.

I want to save my soul at any cost."