Aims of the Motu Proprio: The Reform of the Reform 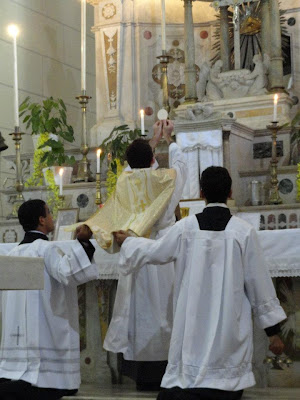 The increasing availability of Msgr Nicola Bux’s book The Reform of Benedict XVI [1] is an opportunity for us to depart somewhat from our usual focus on the application of the motu proprio “Summorum Pontificum” and to take stock of the “reform of the reform” that the Holy Pontiff has initiated in liturgy. It is also the occasion to consider what sort of relationship will slowly emerge between the two forms of the Roman liturgy.

The first aim of the motu proprio “Summorum Pontificum” is clear: to make it possible for the traditional Mass to be celebrated in every parish where it is requested. The MP will only truly be applied when we shall see the ten o’clock Sunday Mass celebrated in the ordinary form and the eleven o’clock Mass in the extraordinary form, or the reverse, in the cathedrals of Dublin or Detroit, as well as in the cathedrals of Boise or Aberdeen. In a word: as far as the MP’s application is concerned, we are still on the starting line.

A – The “Reform of the Reform” Project
The second aim of the MP, though implicit, is nonetheless obvious because of all that Cardinal Ratzinger has said on the subject in the past and because of the wish expressed in the 2007 text: a “mutual enrichment” of the two forms, which from that point coexist officially. Enrichment: everybody knows that the more obviously “rich” form is that which benefits from an uninterrupted, ten-centuries long tradition (or even seventeen-centuries long for its essential part, the canon), and whose doctrinal and ritual value is at least similar to that of the other great Catholic liturgies. In his book, Nicola Bux writes: “Comparative studies demonstrate that the Roman liturgy in its preconciliar form was far closer to the Oriental liturgy than is the current liturgy.” This is so much the case that no one can seriously contemplate denying that the form that needs to be enriched/transformed first and foremost is the liturgy that was hastily contrived forty years ago. Indeed, as Nicola Bux points out, “[one] has to admit that the Mass of Paul VI is far from containing all that is found in the missal of Saint Pius V.”ler...