The Beauty of the Mass 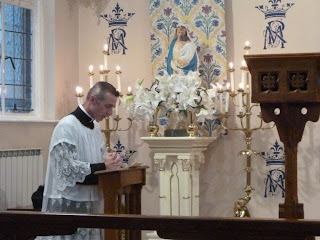 I don't often get the opportunity to sit in choir in my own church but for the Missa Cantata on the Assumption I did. It was a lovely Mass anyway - a decent number of people in church (for a Holyday); the chant, of course; good servers and a glass of wine and some food for everyone afterwards to celebrate a lovely Feast. Sitting in choro also gave me the opportunity to pray quietly and appreciate, from my side vantage point, how lovely the High Altar now looks as a suitable setting for the Divine Mysteries, drawing the eye onwards and upwards and taking the soul with it.

I noticed as well that there was a very good mix of people from the parish and visitors, although many of our "visitors" are here so often that they are de facto parishioners. As the Assumption is one of the few remaining Holydays of Obligation left to us we had an OF Mass in the morning and this EF in the evening. However, many of the parishioners who attended were probably people who would never have gone out of their way to attend the EF but now do so regularly and quite happily. Some now prefer it and others are happy to come along to either - they come to THE Mass (the form, so long as well offered, shouldn't be a presenting issue). Whatever form of the Roman Rite it is, hopefully it is always celebrated with dignity and conducted in an atmosphere of prayer. Fortunately, and as it should be if we keep to the rubrics, there are far fewer differences between the two forms than might have been experienced in the past. Ad Orientem, Latin, decent vestments and sound teaching are surely the basis of both forms - OF and EF.

Since Sumorum Pontificum has freed up the ancient Form of the Mass so that it can be said in any church at any time, this is surely the future. The ancient form of the Mass should not be hidden away just for special interest groups but released from captivity into the wilds of parish life. Thank goodness that the actual offering of the ancient Mass was kept alive by individuals and groups such as the LMS during the years when it almost disappeared. It is great (as again this week) that the LMS Rep for Liverpool often comes along to St Catherine's. I think it's important that the LMS makes it its business to support the Extraordinary Form in a parish setting where it can become a ordinary part of parish life. In this case, that the Extraordinary should become ordinary is a good thing. Perhaps it is this outcome that those who opposed Sumorum Pontificum were (rightly) worried about - that people would experience the ancient Mass and like it.

The parish setting means that the riches and beauty of the ancient Mass are brought into the lives of many more people, bringing a new aspect to their faith lives and that those who perhaps for years have travelled to seek the EF can find a home where they can attend other social and parish events without fear of prejudice and once more belong to a parish community.

The corollary of offering the ancient form of the Mass integrated into a regular parish timetable is that it has a knock-on effect on the celebration of the Ordinary Form. It enriches and gives interest to both priest and parishioners and can enliven and move the liturgy on from the stale old "liturgy groups" asking "what hymns shall we have" and what "theme" shall we have for Mass this week? However, it still takes a a bit of courage to make the step. I get the impression that many more priests would like to do so but are still concerned about reactions in the parish and, more to the point, reactions in the diocese should anyone complain. (Although there would be nothing to "complain" about because, as it is as legitimate to offer the EF as the OF.) Starting on a weekday is reasonably easy, using feasts as the next stepping stone is also easy, but a Sunday celebration is the thing. So it's really up to people who have already discovered the benefits of the ancient form off Mass to request it of their priests and for priests to respond generously and positively. It's also up to priests to introduce it to their people as well.

To go back to where I started this post, what a difference it can make to the priest's experience of celebrating the Mass. So come on Fathers, I know you bought those EF Missals - let's get them off the study shelf and onto the altar! 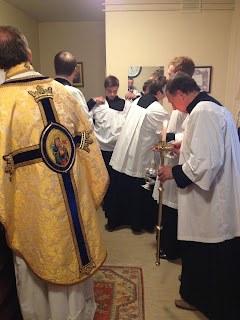 Preparations in the sacristy beforehand 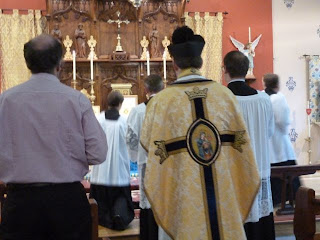 Arriving at the sanctuary 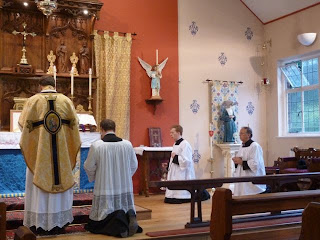 Prayers at the foot of the altar 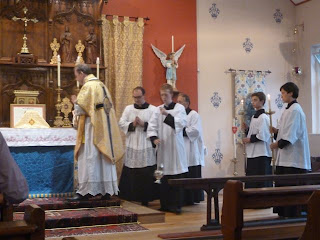 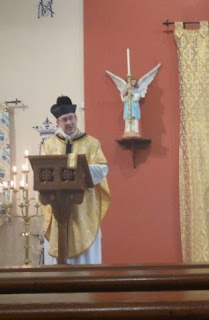 Some of that sound preaching! 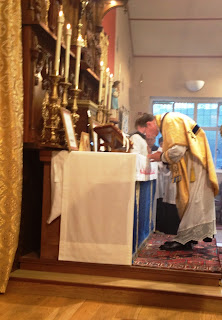 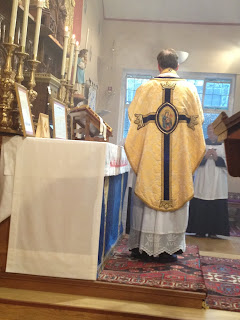 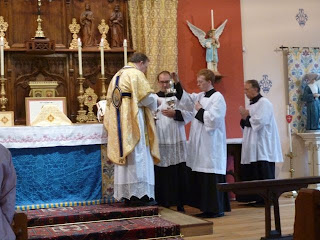 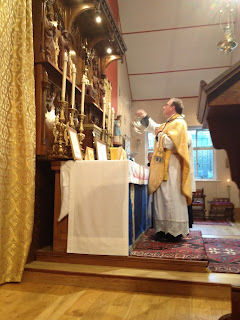