Joseph de Sainte-Marie, OCD: in either sacramental or ceremonial concelebration, no differently than in a ‘private’ Mass, one sole Mass is offered to God. 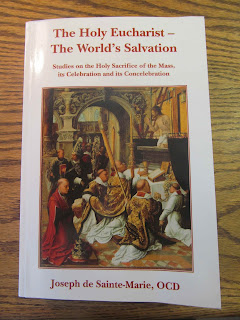 Joseph de Sainte-Marie, OCD. The Holy Eucharist—The World’s Salvation. Studies on the Holy Sacrifice of the Mass, its Celebration, and its Concelebration. With a Foreword by Dom Alcuin Reid, OSB. Leominster: Gracewing, 2015. xxxix + 557 pp. Available from Amazon (USA $40, UK £25,Germany €38) or the publisher.

Let me begin with the bottom line. This is the most important book ever to appear in English on the subject of concelebration. It ought to be read by every bishop, priest, religious, teacher of liturgy, and seminary formator, and absolutely anyone with a desire to learn about this complex and sometimes contentious issue.

Fr. Joseph de Sainte-Marie (1931–1985), a professor and specialist in Carmelite spirituality at the Pontifical Theological Faculty ‘Teresianum’ in Rome, published this substantial collection of his writings in 1982, only a few years before his death. One may regret that it has taken over 30 years for an English translation to appear — or better, one may rejoice that it has finally come out for the benefit of those who do not read French. Lest a nearly 600-page tome prompt any dismay, I hasten to repeat that this is a gathering together of a dozen finely-chiseled essays on the Mass and the Holy Eucharist, with special attention to concelebration. Most of the essays could be read in one sitting; the lovely style of writing and the vigorous argumentation make the book hard to put down once begun!

While this book contains eloquent essays on the Mass as a true and proper sacrifice, the sacramental system, and the relationship of sacrifice and banquet, far the greater part of its bulk is given over to a careful, systematic, and exhaustive study of concelebration under every aspect — historical, liturgical, theological, pastoral, magisterial. For example, Fr. Joseph de Sainte-Marie provides a detailed synopsis of the elements of the question as they make their appearance in the ancient and medieval periods down through the twentieth century Liturgical Movement and into the Second Vatican Council; he sifts all the pertinent texts of and interventions at the Council to establish just what was being proposed, debated, changed, agreed to, and subsequently applied or misapplied; he compares and contrasts Eastern and Western practices; he patiently gathers evidence to show the ways in which agenda-driven reasoning and sleight-of-hand were employed to put across a novel reinterpretation of concelebration and to ensure its enforcement.

The author reaches many important conclusions in this work of highly readable scholarship. Among the more immediately practical conclusions are: (1) although concelebration is licit and occasionally opportune, particularly when the presbyterate is led in worship by the bishop, it was never historically, and should not now be, the normal or default mode of offering the Mass; (2) much of our contemporary theory and praxis are based on a fundamentally flawed concept of what concelebration historically was—a flaw that found its way into the Council debates and subsequent implementation; (3) in either sacramental or ceremonial concelebration, no differently than in a ‘private’ Mass, one sole Mass is offered to God; (4) because “each Mass pours the redemptive Blood of Christ upon the Church and the whole world,” the Church and the world benefit from a multiplication of Masses and suffer loss from their reduction; (5) it can be demonstrated from documents of Tradition and of the Magisterium that the Church herself greatly desires that Masses be thus multiplied; (6) habitual reliance on or presumed choice of concelebration constitutes a genuine liturgical abuse. These statements are, of course, conclusions, and therefore they must emerge from valid argumentation based on thoroughly evaluated evidence. Fr. Joseph de Sainte-Marie takes nothing for granted and establishes each of these conclusions with rigorous research and argumentation that goes far beyond anything I have seen when reading on this question.[1]

It is an exhilarating, sometimes distressing, and always enlightening work, one that is written by a priest who is deeply in love with our Lord Jesus Christ in the most Blessed Sacrament of the Altar. Indeed, he makes it clear that his motivation for the painstaking work that went into his studies is a desire to give glory to God and sanctify souls through the sacrifice of the Mass, coupled with an anxiety (quite legitimate, as anyone who takes up the book will discover) that leaders in the Church had been both deceiving and deceived as they walked down a path of innovation, inversion, and incoherence.

Let me sum up my enthusiasm for The Holy Eucharist—The World’s Salvation: if you have any interest at all in the question of concelebration or in the manner of its current practice in the Latin Rite, you would do yourself an immense favor to get this book and read, for starters, the Foreword by Dom Alcuin Reid (pp. xvii–xxxix) and chapter 1 by the author (pp. 3–27). As you find yourself brought to a greater depth of awareness of the issues, an appropriate subtlety of discernment, and a new strength of practical judgment, you will wonder how we managed to get anywhere before this book was in our hands.

[1] Having given much thought to this matter (see "The Loss of Graces: Private Masses and Concelebration" in Resurgent in the Midst of Crisis, and the NLM article "Celebration versus Concelebration: Theological Considerations"), I was overjoyed to find in Fr. Joseph de Sainte-Marie an author who pursues the inquiry with an unprecedented breadth and depth.
http://www.newliturgicalmovement.org/2015/06/book-notice-definitive-study-of.html#.VZMRdPlViko