More on the Pilgrimage in Trier, Germany

As noted by Gregor, a video has been made available with some of the sights and sounds of the Trier pilgrimage.

Here is that video.

The following report and photos were sent in by a reader in Germany:

For the third time, a pilgrimage in the usus antiquior took place in the baroque church of St. Paulin in Trier, Germany. About 400 pilgrims participated in the Solemn Pontifical Mass, celebrated by the Abbot of Mariawald Abbey, Dom Josef Vollberg O.C.S.O..

In the afternoon the group attended devotions in the crypt of the Cathedral of Trier with the organizer of the pilgrimage, Fr. Nikolaus Gorges, FSSP.

Afterward the pilgrims went in procession to the Holy-Tunic-Chapel in the Cathedral. 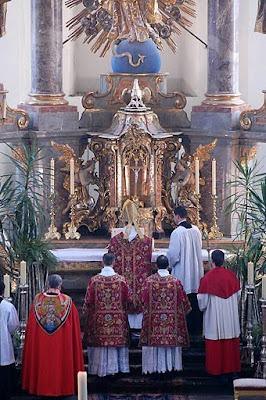