This Blog This Blog Loading... A thorough comparison of the Traditional Latin Mass and the ordinary Mass 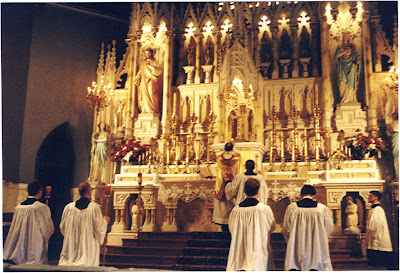 We have been blessed with an exclusive, lengthy, deep delve into what really differentiates the Mass of All Ages and the ever-so-ordinary Mass in use, unfortunately, in all too many parishes -- the Novus Ordo.
The author, Don Pietro Leone, holds degrees in both classics and philosophy. This holy priest has taught philosophy in both America and Europe at the university and seminary level. He is a priest of the Tridentine Rite. He divides his time between pastoral and academic work and has recently completed a book on Catholic marriage from a philosophical and theological standpoint.
Preface

The liberalization of the Old Roman Rite by the Supreme Pontiff in September 2007 has stimulated a variety of reactions. Polemicists on the side of modernity have labelled it as “something for nostalgics” or as incomprensible and therefore to be rejected ; while polemicists on the side of Tradition have labelled the New Rite (as they always had) as invalid or sacrilegious.
Pacifists, by contrast, have either attributed the preference for one rite or the other to “sensibility” alone , or have ascribed an equal value to both rites , speaking for example of “respective strengths”, such as a greater “verticality” in the Old Rite and a wider range of readings in the New . If such persons have any reservations concerning the New Rite, they claim that it suffices to celebrate it well and reverently.
To this background, the present essay aims to evaluate the two rites scientifically: more precisely to compare them in regard to their theology of the Mass. In so doing, it seeks neither to make peace nor war, but simply to establish the truth, by examining the relevant facts and drawing the necessary conclusions.
The essay consists in large part of a synthesis, a re-ordering, and in the second part a certain development, of the relevant material taken from the book “Pope Paul’s New Mass” by Michael Davies . It relies greatly on the Critical Study of the Novus Ordo Missae by Cardinals Ottaviani and Bacci and on the later studies made by Una Voce and by Lorenzo Bianchi (op.cit.) on the changes to the propers.
It aims to give the reader a synthetic overview of the subject, both in regard to the ordinary, (or “common”) of the Mass, that is to say those parts which are common to all Masses, and in regard to the propers, that is to say those parts which are proper to any given Mass. The first half of the essay analyzes the common of the Mass, the second half analyzes inter alia the propers of the Mass.