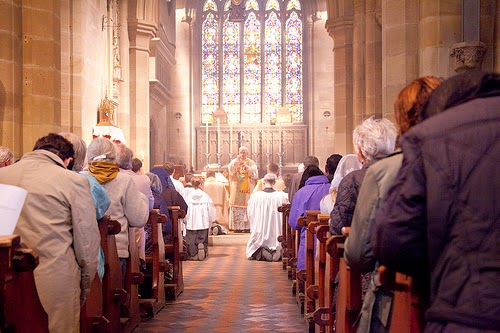 How many times do lovers of the classical Roman Rite hear the objection: “The new Mass is better than the old one because it allows for more active participation of the faithful,” or “The old Mass just had to be reformed eventually, because the priest was the only one doing anything, and the people were all mute spectators.” My aim in this article is to refute such claims and to demonstrate that, if anything, the opposite is true.

Active/Actual Participation
People who take the time to sit down and study Sacrosanctum Concilium are often struck by how much of this document is unknown, ignored, or contradicted by contemporary Catholic practice. Often, there are phrases that are so rich, and yet the manner in which they have been turned into slogans has undermined their original nuance and depth.

The most notorious victim of this process of journalistic simplification has been the notion of “active participation” or participatio actuosa—which, in fact, is better translated “actual participation,” where actual has the philosophical sense of really entering into possession of something, rather than having an unrealized capacity for it. In contemporary English, “active” is the contrary of passive or receptive, whereas “actual” is the contrary of potential. Thus, I can be actually receptive to the Word of God; I can be fully actualizing my ability to be acted upon at Mass by the chants, prayers, and ceremonies, without my doing much of anything that would be styled “active” in contemporary English. As St. John Paul II explained in an address to U.S. bishops in 1998:

Active participation certainly means that, in gesture, word, song and service, all the members of the community take part in an act of worship, which is anything but inert or passive. Yet active participation does not preclude the active passivity of silence, stillness and listening: indeed, it demands it. Worshippers are not passive, for instance, when listening to the readings or the homily, or following the prayers of the celebrant, and the chants and music of the liturgy. These are experiences of silence and stillness, but they are in their own way profoundly active. In a culture which neither favors nor fosters meditative quiet, the art of interior listening is learned only with difficulty. Here we see how the liturgy, though it must always be properly inculturated, must also be counter-cultural. [link]