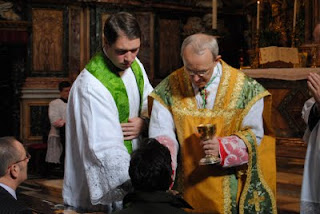 The Most Reverend Athanasius Schneider of Kazakhstan has become the most recent bishop to speak up on ambiguities and problematic texts in the documents of Vatican II and speak up in favor of an authoritative interpretation or clarification of these documents in continuity with Catholic Tradition.

His comments came in the context of a lengthy interview with Michael Voris of Church Militant TV, who caught the Bishop in Rome and somehow got a 34 minute interview out of him. Click here to check out Michael Voris' interview with Bishop Athanasius Schneider; it is long, but well worth it if you have the time.

This is not the first time Schneider has made such comments; in 2010 he called for a "Syllabus of Errors in Interpretations of Vatican II" (see here); but in his comments to Voris he goes further and explains what he specifically objects to in some of the Council documents and what sorts of clarifications are needed.

Bishop Schneider begins by stating that the biggest error relating to the Council is a basic approach to the Council itself that sees it as a rupture with Tradition. In this, he echoes the words of Benedict XVI, who popularized the phrase "hermeneutic of rupture" in his now famous 2005 homily. Schneider notes that this presumption of rupture can be "liberal or traditional", though as his subsequent comments explain, he sees the liberal rupture as much more grave than any potential traditionalist rupture. His proposition for remedying this is a formal declaration that the Council should be interpreted in continuity with Tradition and that the Council Fathers had not no intention to make a break with the past.

Like Cardinal Kasper, Schneider notes that it is not simply a problem with interpretation of the Council, what Benedict XVI called the "council of the media", but with the some of the documents themselves. He states that "majority of the texts of the Council are very rich and traditional", but some are "controversial or ambiguous" and suffer from a "lack of precision." Some of these documents are "open to different interpretations" (what Kasper called "compromise formulas"). Thus, following Kasper, he admits an ambiguity in the documents.

During the interview he is asked about Kasper's comments, and far from denying or contradicting them, he states that Kasper's comments are correct and need to be officially stated by the Magisterium. He calls for an official clarification of the documents of Vatican II, a sort of authoritative interpretative key to ensure that the documents are understood in continuity with Tradition. He states that the Church needs to offer "some clarifications or some indications of the misinterpretations...because we have to be very, very concrete" and suggests perhaps an explanatory note, as Paul VI offered for Lumen Gentium.

By the way, I had proposed a similar concept a few weeks back - that an authoritative interpretation of Vatican II was needed.

Whereas Schneider does not follow Kasper in discussing the intentionality of these ambiguities, he does discuss some very concrete examples of specific passages he finds problematic and asks for the Magisterium to "give us clear, very clear, interpretations of some very specific subjects." He suggests that this clarification should come from the Pope himself.

So, what ambiguities does the Most Reverend Athanasius Schneider find problematic?

His first example is the doctrine of collegiality found in Lumen Gentium. Without citing any passages in particular, he opines that the document teaches the headship of the Pope in an "insufficient" way and that the document can be read to mean that the Pope is a first among equals who has only a of primacy of honor, ignoring or downplaying his actual jurisdiction and role as episcopus episcoporum. Schneider does not cite a text directly so I will not comment any further except to say that the view of collegiality that Schneider finds "insufficient" is very common manner.

Staying in Lumen Gentium, he spends quite a bit of time with Lumen Gentium 16, which he forcefully says  "needs and explanation." The problematic passage he cites is the sentence which states that "the plan of salvation also includes those who acknowledge the Creator. In the first place amongst these there are the Muslims, who, professing to hold the faith of Abraham, along with us adore the one and merciful God." His specific problem is which the last sentence, which states that Muslims and Catholics together adore the one God. Schneider says that this statement is extremely clumsy and admits of  "two substantial different levels" of interpretation. He goes on to make a phenomenally important distinction between belief in one God according to natural reason and the supernatural virtue of faith, which alone is pleasing to God:

"We adore God always as a Trinity...our adoration is an adoration of supernatural faith. To worship God as Creator only or one God only, there is no need of faith. The use of your reason is sufficient. This is a dogma of the First Vatican Council, that every human person is able only by his reason, natural light of reason, without the light of faith, to recognize the existence of one God as Creator. Consequently, to worship Him according to his knowledge of natural reason. These are the Muslims - they have no supernatural faith and therefore they have no supernatural act of worship. Even the Jews who rejected Jesus as God, as Trinity, they rejected Him they have no faith. Therefore their worship is also natural, not supernatural."

The Muslim worship of Allah is not the same as the supernatural worship of the Trinity, which alone is pleasing to God. Thus, even if they claim to worship the same God based on a certain historic pedigree, their worship is fundamentally different from Catholic worship and cannot be pleasing to God because they lack the supernatural virtue of faith. When Voris mentions that Cardinal Timothy Dolan recently encouraged Muslims to keep their faith and said that we worship the same God, Schneider dryly says, "The Cardinal was referring to this expression of the council. Now you observe why it is necessary to strengthen this essential distinction."

Also on Schneider's naughty list is Gaudium et Spes 12, which begins with the statement "all things on earth should be related to man as their center and crown" (finis et culmin). In his analysis of this passage, :

"I think this expression is very ambiguous. It is not correct because all the things which exist on earth have their finality in God and have to glorify God as their summit...all things that exist are created for the glory of God and for Christ, through Him and for Him. Christ is the end of all created things. The aim of this expression was that God created all non-rational things for the service of man, and that man is the ruler or king of this creation because God gave man such a dignity. But I think we cannot say this in this manner. We have to stress, even so, the created things on earth are created for man, but not ultimately for man...so we have to explain this also, otherwise it is an anthropocentrism, and this is all part of the crisis of this past fifty years, this anthropocentric vision. And not only vision, but practice, also, Christian life, liturgy and theology. Very anthropocentric. And this is the biggest danger of humanity, for the Church to be anthropocentric, because this was the first sin of Adam and Eve. This is very dangerous, and such expression of our Council texts can be used for such things and therefore need more explanation."

When it comes to ecumenism, Schneider has a strong criticism of the tone of the document Unitatis Redintegratio. The document on ecumenism teaches that God can use even the non-Catholic communities as means of salvation. Schneider opines:

"This could also be interpreted in a wrong manner, in a way of the Anglican Branch theory that there are several branches of Christianity who are all means of salvation. Therefore we also have to clarify this expression. We have to say perhaps, nevertheless, God can use other Christians, but individually because they are baptized...Remember what St. Augustine said, what the non-Catholics have, they took from the Church. He even said they have stolen it from our house. What they have, this is Catholic, not theirs. Therefore, we have to explain this. Otherwise, it could be understood wrongly."

In other words, individual non-Catholic Christians, by virtue of the valid baptism they share, can certainly be means of grace; it was a Protestant who first shared the Gospel with me when I was a pagan teenager, and this became a means of grace that was the first step in my whole conversion. But Schneider points out that we cannot attribute this to sects or denominations collectively, as if God wishes to utilize groups in material heresy as some kind of "sub-churches" alongside the Catholic Church. Whatever good individuals do or bring to the table, they bring it by virtue of what they retain from Catholicism. These denominations, on the other hand, owe their very existence to the fact that they reject Catholicism. So the fact that an individual Protestant may be a blessing or be instrumental as a grace-bearer does not legitimize Protestantism as such.

There is much more and I encourage you all to watch the full interview if you have time. But it is important to note that Schneider is the latest voice added to a growing trend: clerics who are admitting that the documents of Vatican II themselves have ambiguities and problems that ought to be rectified. Benedict XVI himself was perhaps the first to raise these objections when he noted some Council documents were "dense" and "weak" (see here) and rectified the subsistit in problem of Lumen Gentium by issuing an interpretive document; more recently we had Kasper's candid admission on intentional ambiguities in the conciliar texts. Now we have these refreshingly honest comments by Schneider about some legitimate problems with several key Conciliar documents.

As we move further from 1965, it is becoming increasingly acceptable to note the existence of ambiguities and problems in the Council documents, and that this can be done without calling into question the legitimacy of the Council. This is a significant shift, as in previous years there were only two possible positions on the Council: the documents were perfect, the Springtime of the Church had to be affirmed unhesitatingly, and any problems were due not to ambiguities in the documents but to liberals who were twisting the documents, hijacking them, as it were. Or, if you denied any of these assertions, the only alternative was that you were a schismatic who was questioning the legitimacy of the Council and dissenting from the Magisterium. The comments of Benedict, Kasper and Schneider demonstrate clearly that it is possible to have an intelligent conversation about the documents that admits of their weaknesses without in any way being unfaithful to the Church. Indeed, the most recent comments of Schneider show us that this sort of discussion is not only possible, but necessary.