Cardinal Alfons Stickler: You know that worship and worshipping in every region is attached closely to tradition. No worship is easily changed in any religion. All are attached closely to tradition. This is true in a special manner also for our Rite, our Roman Latin Rite. Its changing after the Council was said to be a question of natural development; but, for every Rite, thinking should be only organical, adopted slowly in order to give no impression of changing, of cutting tradition. Unfortunately many people had this impression after the so- called "reform" established by the Commission, which was instituted by Pope Paul VI after the Council. Many things were changed which really cut the hearts of many of the Faithful - I would say sometimes the best of the Faithful. 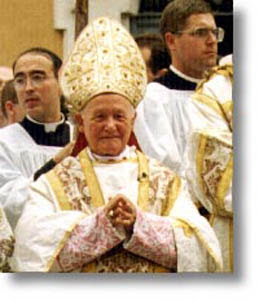 on June 20, 1992 at the Annual General Meeting
of the Latin Mass Society

Your Movement has Legitimacy in the Church

I have accepted, with great pleasure, the invitation of your Chairman and Secretary to come to your Meeting. Now after reaching my 80's I am free from my ordinary work in the Curia so I can more easily accept such invitations and I do it with great pleasure when I can be helpful to so many of the faithful who today have many difficulties. I will communicate with you some ideas which I have found in many countries. I have been to Italy, France, Austria, Switzerland. I have been last February also in the United States for the opening of the Institute of Dietrich von Hildebrand, with a great High Mass in St. Agnes Church. I was told that the church was never so full since Fulton Sheen preached his Lenten sermons there. From everywhere people were coming so I could realise that in the United States also, the movement and the consideration for the old Mass are very effective.

The first idea I will communicate with you is that you can be sure that your movement has full legitimacy in the Church. Some have said that we are not legitimate. This is not true because, if you remember article 4 of the Liturgical Constitution, the Council Fathers explicitly said all the venerable rites have to be preserved. Some people say this is valid for all the other rites, with the exception of the Roman Latin rite. This is not so. Because article 4 says: all the rites legitimately recognised. This was not only established for the rites existing at that time, during the Council, but also for the rites that should be approved afterwards. Now the Old Latin rite was really recognised after the changing of the former Latin Roman rite because, as you know, exception was given immediately for old priests and, in England, you had fortunately your great Cardinal Heenan, who obtained the Indult for England and Wales in 1971. Then, we had the Motu Proprio, the Indult of the Pope, and later on Ecclesia Dei which was clearly confirmed by the Pope; for example, when he spoke to the Abbot of Le Barroux in 1990, who had asked explicitly for this rite. Consequently, a new authority was given to the old Rite on the base of the liturgical Constitution of the Council itself. This recognition is coming from the Holy See, from the Pope, under the conditions given at the moment of the new approbation, which institutes a real legitimation of the Old Rite (and is available now). So, if you fulfil the conditions for the continuation of the Old Rite, it is legitimate for you. This is the external legitimacy of your movement.

Now we have another legitimacy which is coming from the internal sensibility for this rite. You know that worship and worshipping in every region is attached closely to tradition. No worship is easily changed in any religion. All are attached closely to tradition. This is true in a special manner also for our Rite, our Roman Latin Rite. Its changing after the Council was said to be a question of natural development; but, for every Rite, thinking should be only organical, adopted slowly in order to give no impression of changing, of cutting tradition. Unfortunately many people had this impression after the so- called "reform" established by the Commission, which was instituted by Pope Paul VI after the Council. Many things were changed which really cut the hearts of many of the Faithful - I would say sometimes the best of the Faithful. This is also a reason to continue the tradition in the external forms of the Rite we professed before. This is the proof of the old saying "Lex orandi - Lex credendi". Unfortunately too many things have confused the common faithful in our Church. This is one of the reasons why they no longer have the security of an unchanging rite. "Lex orandi - Lex credendi." If the Law of worshipping is changed so profoundly, our faith has lost the help we had in our worship.

Now the next idea I want to express is that we have to avoid, always in our life and in our discussions, in our general behaviour in our association, every kind of polemics, because there is always a danger of hurting others. If there are polemics, they will say "Ah, you are a sect with no more reasoning". So we have to profess our attachment to the Old Rite calmly, reasoning with them but without polemics.

We have to explain also to ourselves the reasons for following the Old Latin Rite and we have many reasons for it. The first I have mentioned already; it is the absolute tradition of Liturgy in every religion to have no change with the past because we have to preserve that rite as the expression of our Faith. You know that the Oriental Church saved the common truth, that is the Catholic Truth, by preserving the rite. They preserved all the Sacraments because they were attached so strongly to the rite which they would never changed. The other heretics - Protestants and so on - have changed the Faith because they have changed the Rite.

The Catholic Church a Communio

The Vatican Council says explicitly that we have "a communio" in the Catholic Church, the Pope with the Bishops and with the priests in all parts of the world. We are particular churches but we are all in one Catholic Church. If we have the same faith, even with the different rites, but not in all our fundamental teaching, then we have not the complete Communion. For example, the Oriental Church is a Church not in complete communion because there is not preserved the dogma and truth in the Primacy of the Pope. They have not the whole truth, but most of it they have preserved. All the other churches are not called "churches" in the full sense but religious communities. This means that they have not the complete substance of our Faith. So the Catholic Church in the case of the Rites, who did not absolutely preserve the truths of the Catholic and Latin Rites has not with them this unity. This is very important in order to confirm our sensibilities for the Old Rite which is really that of the "Lex Credendi" expressed by the "Lex Orandi".

The Modernity of the Church

We have to consider still another idea. Modern Catholics say "Now we have to cut away all the old things. We must be modern." But this modernity is not the modernity of the Church because we have to preserve the whole substance which is our heritage from past generations. So if many of the Bishops ask us "Why do you follow the Old Rite?" We can answer very easily: "The new rite was introduced after the Council as a matter of pastoral care. This means that the Faithful should be animated more and more by the new form of rites to be better in Catholic truth and life. But many good people in the world who still believe in the truths of the Catholic Church are not satisfied about the innovations introduced into the Mass. Can you say then that the pastoral purpose has been fulfilled?" I think, through my experience, that there is more and more dissatisfaction becoming stronger always in all the categories of age, social positions, even in many young people.

Further we are told that the truth about the Mass, about the centre of the liturgy has not really changed. But we can ask; have we the same sense, the same reverence we had before - and perhaps still have - when we assist at the Old Roman Rite? Or have we a loss of reverence, of awe of our biggest mystery, our faith in the Holy Mass? In the sacrifice? It was admitted officially when, two years ago, on the Silver Jubilee of the changing of the Rite, authorities in Rome admitted that there was a great loss of awe in the Mass - the most important rite of our worship.

This is the experience of all who travel around everywhere. We have lost what really is at the heart of our worshipping in the Holy Sacrifice. Many times we get the impression that it is man being worshipped but not God. We have a Communion meal, but not a Sacrifice. I think that this has proved one of the most important changes in the general attitude to the Holy Sacrifice of the Mass. When I studied Theology I was told that the centre of the Mass is the Consecration, the Communion is quite necessary for the priest but supposes the sacrificial act already done. Today, at the centre is the meal. What we have to do when confronted with the situation as members of the Association, you represent here. Firstly we have to tell our Bishops and our parish priests that we are not satisfied with the new rite; that we have good reasons for being attached to the Old Mass. We should explain all the reasons why it should be available for those who ask for it. We must also explain that the Holy Father has granted the privilege contained in the Motu Proprio; Ecclesia Dei and that he wanted to take care of the sensibilities of those attached to the Old Latin Mass.

Loyalty Always to the Holy See

Our fidelity to the Old Rite must always conform to the decisions of the Holy See, with all the conditions satisfied which the Holy See has laid down for this purpose. We should persist in our fidelity to this heritage, which is a heritage of truth and because we can be sure that also today, the old Latin Mass is completely valid and "Lex Orandi" reflects the "Lex Credendi". If we are faithful in "Oratione", we can be certain to remain also attached to the truth in "Credendo", in full devotion to our heritage of Faith.
fnte:http://www.latin-mass-society.org/sticklms.htm
Etiquetas: CARD . ALFONS STICKLER