News from Poland by Shawn Tribe
One of our Polish readers sent in images from a solemn Pontifical Mass (usus antiquior) by a Polish bishop -- apparently, so I am told, the first such Pontifical Mass in quite a long time.

Venice: Requiem for the Grand Master

by Shawn Tribe
These photos came to the NLM from Venice and the Fraternity of St. Peter apostolate of San Simeon Piccolo. They depict a Requiem Mass that was recently offered for the repose of the Grand Master of the Knights of Malta.

Ever since Pope Benedict XVI issued Summorum Pontificum in 2007, the Canons Regular of St. John Cantius have been hard at work to educate priests how to offer the Extraordinary Form of the Mass according to the 1962 Missale Romanum. Their multi-media website, www.SanctaMissa.org, is not yet one-year old, yet it has already given assistance to priests throughout the world learning to offer the usus antiquor.

Because many priests regularly approach the Canons Regular for personal training in the Extraordinary Form, it seemed advantageous to them to offer a formal group-training workshop for priests so that the requests of more clergy could be met. Working in cooperation with the Archdiocese of Chicago, the Canons Regular received the blessing of Francis Cardinal George, O.M.I., Archbishop of Chicago, to carry out this work of formation, so that the pastoral needs of Catholics today could be better addressed. His Eminence also suggested inviting seminarians to the workshop so that they would also be able to gain from this liturgical and pastoral formation experience.

With enthusiasm, priests and seminarians descended upon the campus of Mundelein Seminary , to attend a hands-on workshop on the celebration of the Extraordinary Form of the Mass of the Roman Rite held at the Cardinal Stritch Retreat House. For the next five days, these priests and seminarians, who hailed not only from the Archdiocese of Chicago, but from all over the United States, Mexico, Puerto Rico, Lithuania, Italy, and the Philippines, would study the ceremony, ritual, rubrics of the Missal of Blessed John XXIII.

Each day the participants of the workshop had an opportunity to attend celebrations of the Traditional Latin Mass, ranging from Missa Pontificalis to Missa Lecta. Hosted by the Conventual Franciscans, the Missa Pontificalis and Missa Solemnis were celebrated at Marytown. The celebration of the Missa Cantata was held three times during the week at the St. Mary Chapel of Mundelein Seminary. The participants were greeted with warm hospitality by our hosts at Marytown and Mundelein, and everyone enjoyed participating in the robust singing of the Gregorian chant ordinaries and responses.

During the workshop, the Most Rev. Joseph N. Perry, Auxiliary Bishop of Chicago, presented a talk entitled The Spirituality of the Traditional Latin Mass, showing how the Ordinary and Extraordinary Forms of the Mass, held in equal honor, can enrich the Catholic faithful in parish life. Plunging into the spiritual depths of the Traditional Latin Mass, Bishop Perry inspired all to receive the Extraordinary Form as a gift from the Church, meant to nourish souls with the grace of God.

Rev. C. Frank Phillips, C.R., Pastor of St. John Cantius Church in Chicago, and Founder of the Canons Regular of St. John Cantius, gave a lecture entitled The Extraordinary Form in Parish Life Today, detailing ways in which the celebration of classical form of the Liturgy can be successfully integrated into parochial life and help provide Catholics of all ages with a deep appreciation of the heritage and tradition that is ours.

While the priests of the Canons Regular of St. John Cantius instructed the priests in the celebration of Low Mass and High Mass, the brothers taught the seminarians in attendance how to serve at the altar. Additional tutorials were provided in the correct pronunciation of ecclesiastical Latin as well as in Gregorian chant.

The entire success of this workshop was entrusted to Our Blessed Mother, and each day the priests and seminarians begged her intercession as they continued to study the celebration of the Extraordinary Form, so that they might return to their parishes and serve the faithful attracted to the Sacred Liturgy celebrated according to the venerable traditions of our fathers.

Here are some additional photographs of the event:

More from the Pontifical Mass

(The Proclamation of the Gospel)


Mgr Ranjith,Ex- Secretary to the Congregation for Divine Worship celebrated a pontifical mass and ordained eight new deacons. The feast of our Lady, BMV Reginae was celebrated in blue, an indult for Bavaria.

Some photographs of the event... 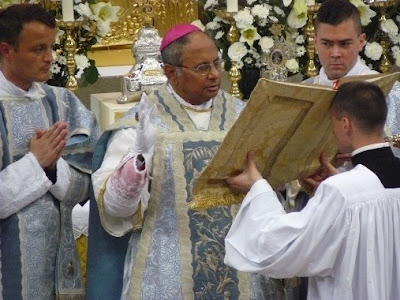 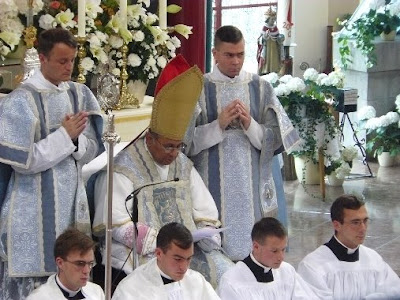 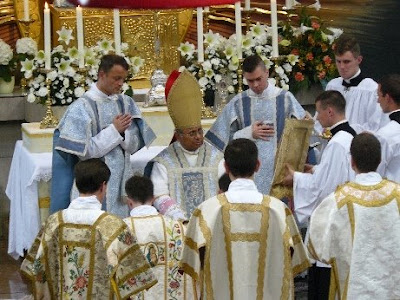