La trahison des clercs: Barsotti, Radaelli, and the "original sin" of the Council: a pastoral language born of the diabolical pride of clerics 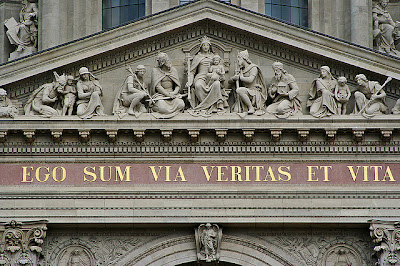 It is not a matter that concerns the members of a specific priestly society, or even all traditional-minded Catholics - it is the main concern of the future of the Church. What does she want to be: the chosen people of God and sacred depositary of His treasures of salvation, to be transmitted to all the world as faithfully as her Lord first gave them to her, or something else? Outside her own structure that is her proper language - the words of the Word, via, veritas et vita -, her message falls apart, as well as her purpose and her vitality. (Read also: Obedience and the Power of Modernists, by Fr. Giovanni Cavalcoli, O.P.) 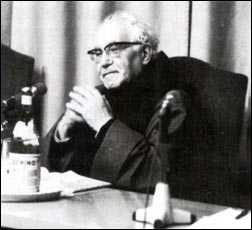 Fr. Divo Barsotti, a major Italian theologian of the 20th century and a friend of Paul VI, and Prof. Enrico Maria Radaelli, the great disciple of Swiss Catholic thinker Romano Amerio - known to all Traditional Catholics by his popular work on the Council Iota Unum -, are the main voices of what can surely be considered the most relevant article by Sandro Magister in a long time.

In a new book sent to the printing press in recent days, Professor Enrico Maria Radaelli - philosopher, theologian, and beloved disciple of one of the greatest traditionalist Catholic thinkers of the twentieth century, the Swiss Romano Amerio (1905-1997) - cites three passages taken from the unpublished diaries of Fr. Divo Barsotti (1914-2006).
...

"I am perplexed with regard to the Council: the plethora of documents, their length, often their language, these frightened me. They are documents that bear witness to a purely human assurance more than two a simple firmness of faith. But above all I am outraged by the behavior of the theologians.”

"The Council is the supreme exercise of the magisterium, and is justified only by a supreme necessity. Could not the fearful gravity of the present situation of the Church stem precisely from the foolishness of having wanted to provoke and tempt the Lord? Was there the desire, perhaps, to constrain God to speak when there was not this supreme necessity? Is that the way it is? In order to justify a Council that presumed to renew all things, it had to be affirmed that everything was going poorly, something that is done constantly, if not by the episcopate then by the theologians.”

"Nothing seems to me more grave, contrary to the holiness of God, than the presumption of clerics who believe, with a pride that is purely diabolical, that they can manipulate the truth, who presume to renew the Church and to save the world without renewing themselves. In all the history of the Church nothing is comparable to the latest Council, at which the Catholic episcopate believed that it could renew all things by obeying nothing other than its own pride, without the effort of holiness, in such open opposition to the law of the gospel that it requires us to believe how the humanity of Christ was the instrument of the omnipotence of the love that saves, in his death.”

In Radaelli's view, the current crisis of the Church is not the result of a mistaken application of the Council, but of an original sin committed by the Council itself.

This original sin is claimed to be the abandoning of dogmatic language - proper to all of the previous councils, with the affirmation of the truth and the condemnation of errors - and its replacement with a vague new “pastoral” language.

It must be said - and Radaelli points this out - that even the scholars of progressive orientation recognize in pastoral language a decisive and distinctive innovation of the last Council. This is what has been maintained recently, for example, by the Jesuit John O'Malley in his widely-read book "What Happened at Vatican II."

But while for O'Malley and the progressives the new language adopted by the Council is judged in an entirely positive light, for Radaelli, for Roberto de Mattei, and for other representatives of traditionalist thought - as for Romano Amerio before them - pastoral language is stigmatized as the root of all evil.

According to them, in fact, the Council presumed - wrongfully - that the obedience due to the dogmatic teaching of the Church also applied to pastoral language, thus elevating to unquestionable “superdogmas" affirmations and arguments devoid of a real dogmatic foundation, about which instead it is said to be legitimate and obligatory to advance criticisms and reservations.

From the two opposed languages, dogmatic and pastoral, Radaelli sees the emergence and separation "almost of two Churches.”

In the first, that of the most consistent traditionalists, he also includes the Lefebvrists, fully “Catholic by doctrine and by rite” and “obedient to dogma,” even if they are disobedient to the pope to the point of having been excommunicated for 25 years. It is the Church that, precisely because of its fidelity to dogma, “rejects Vatican II as an assembly in total rupture with Tradition.”

He assigns to the second Church all of the others, meaning almost all of the bishops, priests, and faithful, including the current pope. It is the Church that has renounced dogmatic language and “is in everything the daughter of Vatican II, proclaiming it - even from the highest throne, but without ever setting out proof of this - in total continuity with the preconciliar Church, albeit within the setting of a certain reform.”

"It is not Ecône [editor's note: the community of the Lefebvrists] that must submit to Rome, but Rome to Heaven: every difficulty between Ecône and Rome will be resolved only after the return of the Church to the dogmatic language that is proper to it.”

In order for this goal to be reached, Radaelli presupposes two things:

- that Rome would guarantee to the Lefebvrists the right to celebrate the Mass and the sacraments exclusively according to the rite of St. Pius V;

- and that the obedience required for Vatican II would be brought back within the limits of its “false-pastoral” language, and therefore be subject to criticisms and reservations.

But before this culmination - Radaelli adds - two other requests would have to be granted:

- the first, advanced in December of 2011 by the bishop of Astana in Kazakistan, Athanasius Schneider, is the publication on the part of the pope of a sort of new "Syllabus,” which would strike with anathemas all of the "modern-day errors";

- The second, already proposed by the theologian Brunero Gherardini to the supreme magisterium of the Church, is a “revision of the conciliar and magisterial documents of the last half century,” to be done “in the light of Tradition.”

...
But even with the traditionalists who have remained in communion with the Church - from Radaelli to de Mattei to Gherardini - the rift is getting wider. They no longer conceal their disappointment with the pontificate of Benedict XVI, in which they had initially placed some hopes. In their judgment, only a decisive return of the magisterium of the pope and the bishops to dogmatic pronouncements can bring the Church back to the right path, with the resulting correction of all of the errors propagated by the pastoral language of the Council.

Errors that Radaelli lists on a page of his book as follows, calling them “real and proper heresies”:

“Ecclesiology, collegiality, single source of Revelation, ecumenism, syncretism, irenicism (especially toward Protestantism, Islamism, and Judaism), the modification of the 'doctrine of replacement' of the Synagogue with the Church into the 'doctrine of the two parallel salvations,' anthropocentrism, loss of the last things (and of both limbo and hell), of proper theodicy (leading to much atheism as a 'flight from a bad Father'), of the meaning of sin and grace, liturgical de-dogmatization, aniconology, subversion of religious freedom, in addition to the 'dislocation of the divine Monotriad' by which freedom dethrones the truth.”

Radaelli concludes his book with an appeal to “lay down weapons” addressed both to the “innovating brethren” and to the “traditionalist brethren” (as he prefers to call them, instead of “traditionalists”). ...
http://rorate-caeli.blogspot.com/