Today I was blessed to attend here in Berlin the First Mass (in German Primiz; you can read about that term and customs surrounding it in the posts about our Holy Father's First Mass which I wrote a while ago here and here) of two of the new priests who were ordained for the Priestly Fraternity of St. Peter on 3 July in Wigratzbad by His Eminence Antonio Cardinal Cañizares Llovera (cf. here). The Mass was celebrated as a Solemn High Mass by Fr Jérôme Bücker FSSP, the other newly ordained, Fr Gerald Gesch, acting as deacon, and Fr Sven Conrad FSSP as subdeacon. Both new priests hail from the parish of St. Matthias in Berlin, where Blessed Count Clement Augustus Cardinal Galen was parish priest from 1919 to 1929. This parish has always been known for a dignified celebration of the liturgy, and has an Ordinary Form Latin Sung Mass every second Sunday. The parish priest had traveled to Wigratzbad for the ordination, acted as presbyter assistens for today's High Mass, and also gave the sermon (in which he mentioned that what most struck him at the ordination at Wigratzbad was the exalted prince of the Church kissing the newly ordaineds' hands, a custom he did not recall from his own ordination, even though that was still according to the usus antiquior books). The Mass replaced the regular 11 am Sunday High Mass, and a good number of faithful filling the church belonged to the parish without having prior familiarity with the usus antiquior, as was evidenced when they sung the entire Pater noster, as is the norm in the Ordinary Form. It was a wonderful occasion, and a very good sign of unity, as well as for the Extraordinary Form taking its rightful place at the centre of the Church, fruitfully co-existing with the Ordinary Form. Another son of the parish celebrated his First Mass in the Ordinary Form there last year, another will be ordained transitional deacon next year, and yet another is a seminarian with the Servi Jesu et Mariæ. Congratulations again to the newly ordained, and to the parish!

Since I did not want to take pictures during Mass, here are some from the German site http://www.summorum-pontificum.de/: 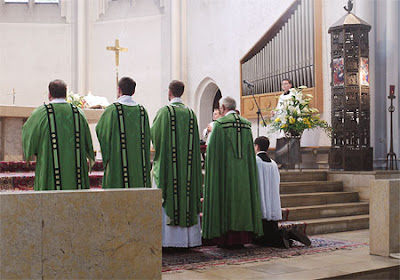 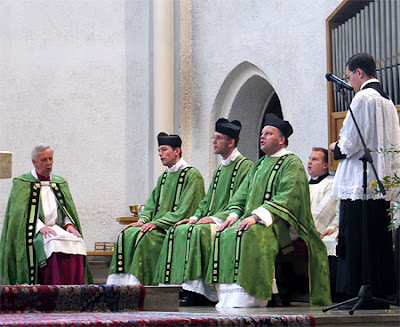 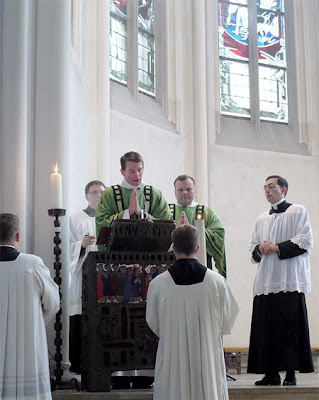 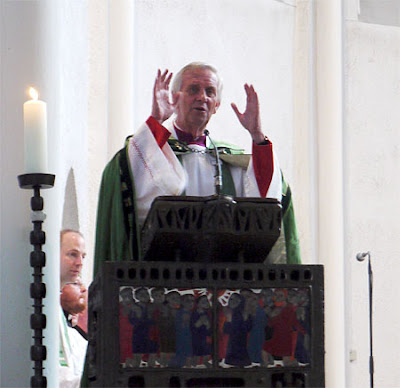 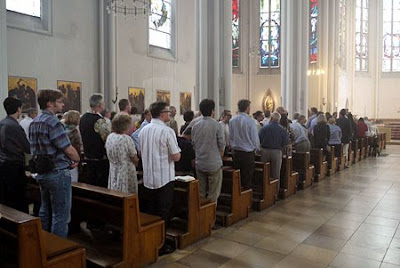 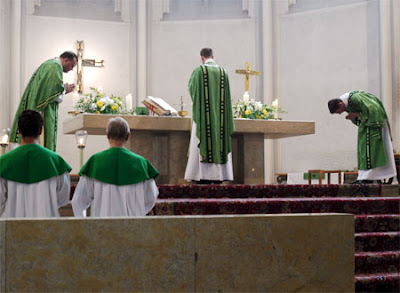 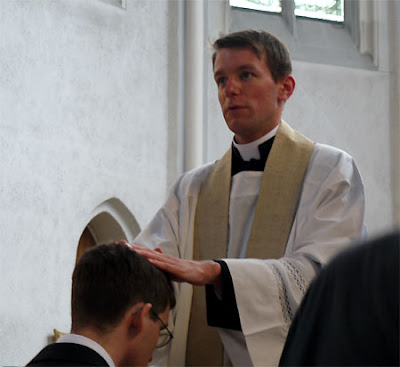 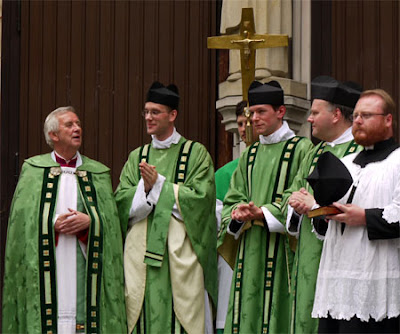