The "Rosary Priest" Moves Another Step toward Novus Ordo Canonization Fr. Patrick Peyton Was Well Known to Catholics around the World before Vatican II 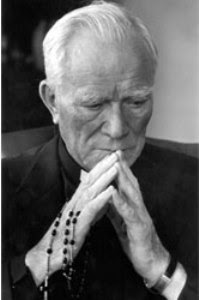 Fr. Patrick Peyton (1909-1992)
Has Cleared the Diocesan Stage for Novus Ordo Canonization
Before Vatican II the Famous "Rosary Priest" Conducted Rosary Crusades around the World
He Was Second only to Bishop Fulton Sheen on Radio and Television
Fr. Peyton Retired in 1964 and Therefore Had No Active Involvement with the Novus Ordo

The cause of Holy Cross Fr. Patrick Peyton, known before Vatican II as the "Rosary priest" for his numerous Rosary Crusades around the world, on July 20, 2010, cleared the Newchurch diocese stage of examination for Novus Ordo canonization, and the a 16,000-page relatio was sent to Newrome. Fr. Peyton's Family Theater Productions was second only to Bishop Fulton Sheen's Life Is Worth Living in television popularity. On radio and television he promoted family prayer under the famous motto: "The family that prays together stays together."
Fr. Peyton was probably was one of the first to see the role that the electronic media could play in evangelizing. Fr. Peyton was associated with several Hollywood personalities, among them comedian Bob Hope and actor Joseph Campanella. Fr. Peyton founded Family Theater Productions in Hollywood in 1947. That ministry produced more than 600 radio and television programs and 10,000 broadcasts. He also conducted Rosary Crusades for millions of people in dozens of countries.
Fr. Peyton died in 1994. He had had serious health problems throughout his life, and retired from the active priesthood in 1964 at age 65. He therefore had no active involvement with the Novus Ordo that took over the Church in the mid 1960s.