May Priests Still Wear the Cassock? 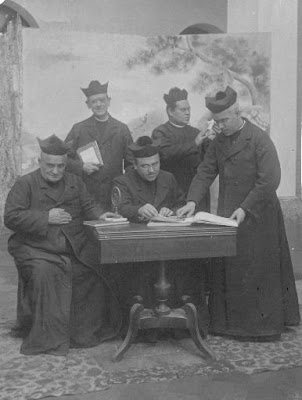 Q: I know of priests who wear their cassock on Sunday but do not wear it in public. Why is this? Are there guidelines that priests have to wear a cassock in church but not outside? — J.G., Stone Mountain, Georgia

A: The use of a cassock (or soutane), an ankle-length garment, worn by clerics and choristers, remains common in some parts of the world while in others it has almost disappeared or, as our reader points out, is reserved for liturgical functions.

A priest's cassock is usually black although white is sometimes used in tropical climates. Bishops and some other honorific prelates wear a purple cassock. A cardinal's cassock is red. These colored cassocks are usually reserved for liturgical functions, however, and both bishops and cardinals typically don a black cassock with colored buttons, trimmings and sash indicating the wearer's hierarchical status.

The Pope's cassock is white, a custom that arose after St. Pius V (1504-1572), a member of the Order of Preachers, continued to wear his Dominican habit even after his elevation to the papacy in 1566.

According to canon law (Canon 284) clergy are required to don some form of worthy ecclesiastical dress according to the norms of the bishops' conference and legitimate local customs.

Thus, while there is ample scope for different forms of clerical garb, a priest should be readily identifiable by his external presentation, unless some grave external circumstances, such as the legal prohibition of clerical dress, makes the ecclesiastical law impossible to practice.

In the United States, the official norms ask that priests generally use the black clerical suit and collar although nothing prevents the use of the cassock. All the same, the custom of largely reserving the cassock for "in house" use within the church, rectory or seminary is fairly long-standing in the United States and predates the Second Vatican Council.

In Poland, and some other Central European countries, the sight of a priest in cassock is still quite common, occasionally even while engaged in leading youth groups and pilgrimages.

In the Vatican, the use varies. Many priests prefer to use the clerical suit for daily chores and reserve the cassock for formal meetings; others retain the habitual use of the cassock.

In fact, until April, Cardinal Joseph Ratzinger could be observed almost daily as he walked across St. Peter's Square from home to office and back again, dressed in a simple black cassock.

Within the liturgy, the cassock may be used along with a surplice (a white large-sleeved loose-fitting garment worn over the cassock and reaching almost to the knees, usually made of linen or cotton and sometimes decorated with lace) in carrying out most rites in which an alb is not prescribed. This would include, for example, the celebration of baptisms, Benediction, and weddings outside of Mass.

However, the expanded role attributed to the alb as a universal liturgical vesture has diminished the use of the cassock and surplice both for priests and for others such as acolytes who often used it to serve Mass.