the obligation of priests to dress as priests in public : In a secularized and tendentiously materialistic society, where even the external signs of sacred and supernatural realities tend to be disappearing, the necessity is particularly felt that the priest – man of God, dispenser of His mysteries – should be recognizable in the sight of the community, even through the clothing he wears, as an unmistakable sign of his dedication and of his identity as a recipient of a public ministry. The priest should be recognizable above all through his behavior, but also through his dressing in a way that renders immediately perceptible to all the faithful, even to all men, his identity and his belonging to God and to the Church. For this reason, the cleric should wear "suitable clerical clothing 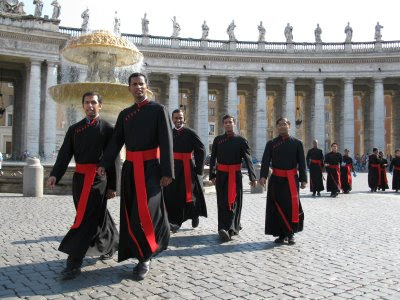 Propaganda Fide Black double breasted cassock, red pipings and buttons, scarlet sash and strings (photo at left)
Germanic College Scarlet Cassock, black sash, scarlet soprana with pendant strings (Masson notes that they had the nickname 'gamberi cotti' or 'boiled lobsters' and that their distinctive dress was imposed due to their reputation for uproarious behaviour)
Greek College Blue cassock, red sash and pipings, blue soprana with strings - out of doors: a black soprana with wide sleeves
English College Black cassock and soprana, black strings and no sash 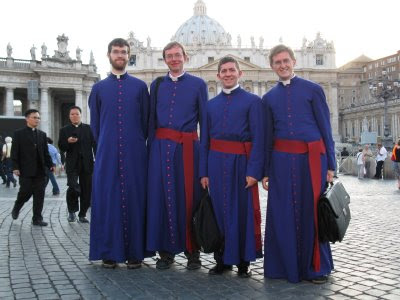 QUAERITUR: the obligation of priests to dress as priests in public


In my former parish, the pastor wears his collar only during "business hours" (he gave a class in his jeans) and very rarely off parish grounds. I suggested that wearing his clerics around the town (we live in a Protestant area of Virginia) would be good for us and the church—we do have converts and his priestly presence may bring in more. He said no, he didn’t want to upset the locals. He recently blessed a house in his blue jeans, on his way to town to eat pizza…the folks were a bit taken aback by this but thankful nevertheless since it had taken them a year to get him out there.

Is there any Church guidance or practice on the wearing of the collar? Is this covered in seminary, especially the issue of being a priest in Protestant  "country"?  Is this an individual "taste" or a individual diocesan policy issue?

I notice you are talking about a priest from your former parish.  Perhaps you would do well to pay closer attention of your present parish.
Also, it might have taken a year to "get him out" to someone elses house. I suspect that the priest has a lot to do.  I am glad that he was able to do the house blessing, however.
That said, it seems to me that while priests perhaps don’t have to wear their clerical clothing when they are washing the car or gardening, it would have been far better to have showed up to do something priestly in priestly garb.
In the days of violent anti-Catholicism in the United States, the bishops meeting in the Council of Baltimore determined that clerics were not to wear the cassock on the streets of the country, but – in a way similar to the practice in England – wear instead black secular dress, the frock coat.  They would use the cassock in church or when fulfilling other duties, but not for general wear around and about.  This established a long-standing practice for secular priests in the United States.
Times have changed, of course.  Many secular priests today are choosing to use the cassock also in public.

The Directory for the Ministry and Life of Priests, issued in 1994 by the Congregation for the Clergy and approved by Pope John Paul II states:


In a secularized and tendentiously materialistic society, where even the external signs of sacred and supernatural realities tend to be disappearing, the necessity is particularly felt that the priest – man of God, dispenser of His mysteries – should be recognizable in the sight of the community, even through the clothing he wears, as an unmistakable sign of his dedication and of his identity as a recipient of a public ministry. The priest should be recognizable above all through his behavior, but also through his dressing in a way that renders immediately perceptible to all the faithful, even to all men, his identity and his belonging to God and to the Church.
For this reason, the cleric should wear "suitable clerical clothing, according to the norms issued by the Episcopal Conference and according to legitimate local customs." (Canon 284) This means that such clothing, when it is not the cassock, [NB: the cassock is the norm, the default, for the whole Latin Church.] should be distinct from the manner in which laymen dress, and in conformity with the dignity and sacredness of the ministry.
Apart from entirely exceptional circumstances, the non-use of clerical clothing on the part of the cleric can manifest a weak sense of his own identity as a pastor completely dedicated to the service of the Church (# 66).

Again, the custom of the US is not for the secular priest to use the cassock in the street, as it were, but it clearly is that he should use black clothing with the Roman, "military", collar (the Roman collar developed from military uniforms).
It is important for priests to ear clerical clothing in most circumstances.  The black suit or cassock isn’t just a uniform to put on in the course of "doing your job", much as a member of the military might do, or the burger flipper at McDonald’s, or the meter reader.  Clerical clothing points to the ontological, sacramental character of the ordained, or those who aspire to be.
Again, if a priest is on a ladder fixing a window, changing the oil in his car, skating, at his family home, or even perhaps – quod Deus avertat – in hiding from an oppressive regime persecuting the Church – clerical clothing is another matter.  We have to be reasonable.
But going to a home to bless a house…?  No-brainer.
There are good priests who are lax in wearing their clerical clothing in public and bad priests who wear little else.  We should not rush to judgment about priests in this regard.
But it remains that in normal circumstances priests are obliged to wear clerical clothing, certainly in the fulfillment of their priestly duties as well as for everyday dress.  The Roman collar is a witness to the man’s identity, whom he serves, and serves as a sign of contradiction in society.  He can be identified and therefore approached as a priest by Catholics and non-Catholics alike. He reminds himself of who he is when he dons it.
In sum, while there are reasonable exceptions to the rule, priests are obliged to wear clerical clothing in the manner determined by the bishops conference.
In the United States you can refer to a letter on this matter written in 1999, found on the site of the USCCB:


On November 18, 1998, the Latin Rite de iure members of the National Conference of Catholic Bishops approved complementary legislation for canon 284 of the Code of Canon Law for the Latin Rite dioceses of the United States.
The action was granted recognitio by the Congregation for Bishops in accord with article 82 of the Apostolic Constitution Pastor Bonus and issued by decree of the Congregation for Bishops signed by His Eminence Lucas Cardinal Moreira Neves, Prefect, and His Excellency Most Reverend Franciscus Monterisi, Secretary, and dated September 29, 1999.  [So, this is not merely a recommendation.]
Complementary Norm: The National Conference of Catholic Bishops, in accord with the prescriptions of canon 284, hereby decrees [So, this is not merely a recommendation.] that without prejudice to the provisions of canon 288 [“Permanent deacons are not bound by the provisions of canon 284”], clerics are to dress in conformity with their sacred calling.
In liturgical rites, clerics shall wear the vesture prescribed in the proper liturgical books.[NB:] Outside liturgical functions, a black suit and Roman collar are the usual attire for priests. The use of the cassock is at the discretion of the cleric.  ["Usual" attire.  There are reasonable exceptions.  Also, this sentence confirms that the priest may use the cassock at all times, though at least the black suit/clothing is minimally required.  The cassock is the proper dress of a Catholic priest in call circumstances everywhere.]
In the case of religious clerics, the determinations of their proper institutes or societies are to be observed with regard to wearing the religious habit.
As President of the National Conference of Catholic Bishops, I hereby decree that the effective date of this decree for all the Latin Rite dioceses in the United States will be December 1, 1999.
Given at the offices of the National Conference of Catholic Bishops in Washington, DC, on November 1, 1999.
Most Reverend Joseph A. Fiorenza
Bishop of Galveston-Houston
President, NCCB
Reverend Monsignor Dennis M. Schnurr
General Secretary