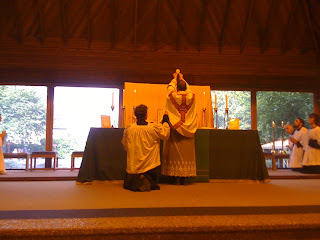 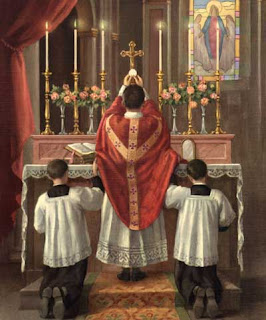 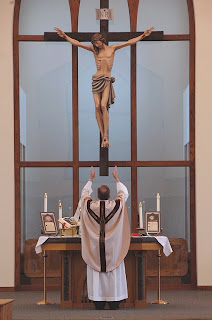 Many people say many things about His Holiness, Pope Benedict XVI but no one can say that he hasn't created controversy in the Church and the world.

In no other area has there been more foment in the Church since the Second Vatican Council than in the liturgy, thanks to Pope Benedict XVI.

I have to write that I never thought that clergy and laity actually could advocate for Mass ad orientem, Mass in the Tridentine Form, Holy Communion kneeling and Holy Communion on the tongue without being ridiculed and silenced by the hierarchy and the intellegencia of the more progressive liturgical wing of the Church. Pope Benedict has changed the discussion and charged it into a new and higher level.

So, emboldened by the Holy Father himself and the ability to offer suggestions without fear of reprisals, how might a new Roman Missal that is more faithful to the 1962 missal, yet still reformed as the Sacrosanctum Concilium on the Liturgy of the Second Vatican Council mandated look?

I would like to start with the first revised missal that was not universally prescribed by the Church, but in use in the USA from 1965 to about 1968 or 1969. It is the 1965 Roman Missal.

To many of us, this missal embodies what Sacrosanctum Concilium mandated as it regards the reform of the Order of the Mass (not its lectionary, as the lectionary of the 1965 missal is the 1962's lectionary but in English). What does this Missal change from the 1962 Missal, what is now called the Extraordinary Form?

1. The "Sprinkling Rite" as it is now called, could substitute for the "Prayers at the Foot of the Altar."

2. Active participation of the assembly in all of the parts of the Mass, including all those that were formerly reserved to the Altar boys was encourage. Full, conscious and active participation meant that the laity shouldn't be day dreaming during Mass, praying other devotions, the rosary the most popular, but should concentrate on the Mass. This movement started in the early 20th century, but was kicked up a notch in the 1950's with the dialogue Mass which is codified in the 1962 missal by the way and the advent of personal, pew missals to assist the laity in following and understanding the Latin Mass in English.

5. The option of praying the "Introductory Rite" or all the prayers through the Opening Collect, at the presiding Chair (as a bishop does in the Sung Mass of the 1962 Missal) was extended to ordinary priests, but it was their choice. This meant that the Prayers at the Foot of the Altar, the Kyrie, the Gloria and the Collect could have all been done at the "presidential" chair, as we do in the Ordinary Form of the Mass today. But the option of doing it at the altar as in the 1962 missal was still allowed. It wasn't either/or, but both/and!

6. The option of ad orientem or facing the people was explicit; there were two explicit choices in the 1965 missal.

8. All the altar boy parts which now the laity were mandated to say or sing could be in English or Latin. This included the Prayers at the Foot of the altar or the Asperges responses, the Kyrie, Gloria, Opening Collect, the Sanctus, Agnus Dei and Prayer after Holy Communion and Final dismissal and blessing.

9. The Last Gospel was suppressed, no longer read, so the Mass ended with the final blessing.

10. The parts of the Mass as in the 1962 missal that are prayed silently remained in Latin: the Offertory Prayers, the Roman Canon, and any private prayers of the priest. Thus Latin was preserved in the 1965 missal, but it was clear that all parts of the Mass could be entirely in Latin if so desired.

12. The non use of the paten during the Eucharistic prayer and hiding it under the corporal was suppressed as was the little ritual of taking it out after the Our Father, the priest blessing himself with it and kissing it.
So with the 1965 reformed Missal as our base or foundation, which is extremely faithful to what Sacrosanctum Concilium desired for the Mass, what might a new and improved Post Vatican II Order of the Mass look like that amalgamates the Extraordinary Form of the Mass and the Ordinary Form of the Mass? By this I mean each form exerting influence on the other. Well these are my humble suggestions:

2. Use the Revised Calendar of the Ordinary Form of the Mass.

3. Use the revised lectionary which in fact incorporates Sacrosanctum Concilium's desire that the more Scripture be used in the Mass and in a lavish way.

4. Use the same form of the Liturgy of the Word as we have in the Ordinary Form today, including lay lectors.

5. Use the soon to be revised English Mass in the Ordinary Form for all the parts of the Mass that the laity are asked to sing or say and for all of the orations (collects, prayer over the gifts (secret) and Prayer after Holy Communion). This would also include all the new and wonderful prefaces there are and additional Masses for saints and various occasions.
So the only thing that would really be different for the Ordinary Form of my future revised version of it is that it follows the Order of Mass of the 1965 missal with all of its rubrics in place, uses only the Roman Canon and silently prayed. Everything else comes from the new English missal that is about to be implemented in Advent of this year.

Finally, kneeling for Holy Communion and receiving on the tongue would once again become the norm. If the laity are allowed the Precious Blood, it would be through intinction.

Not even Pater Ignotus could say that my proposal isn't a reform of the 1962 missal and faithful to Sacrosanctum Concilium.
DE:http://southernorderspage.blogspot.com/