Mons. Nicola Bux : External Signs of Faith by the Celebrant . More than words, a genuflection manifests the humility of the priest, who knows he is only a minister, and his dignity, as he is able to render the Lord present in the sacrament. However, there are other signs of devotion. 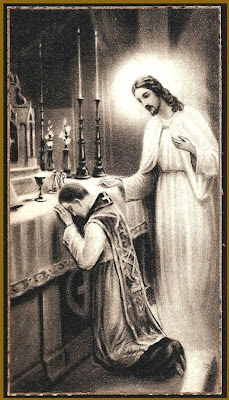 The Significance of Genuflections and Other Gestures

ROME, JAN. 21, 2010 (Zenit.org).- Faith in the presence of the Lord, and in particular in his Eucharistic presence, is expressed in an exemplary manner by the priest when he genuflects with profound reverence during the Holy Mass or before the Eucharist.

In the post-conciliar liturgy, these acts of devotion have been reduced to a minimum in the name of sobriety. The result is that genuflections have become a rarity, or a superficial gesture. We have become stingy with our gestures of reverence before the Lord, even though we often praise Jews and Muslims for their fervor and manner way of praying.

More than words, a genuflection manifests the humility of the priest, who knows he is only a minister, and his dignity, as he is able to render the Lord present in the sacrament. However, there are other signs of devotion.

When the priest extends his hands in prayer he is indicating the supplication of the poor and humble one. The General Instruction of the Roman Missal (GRIM) establishes that the priest, "when he celebrates the Eucharist, therefore, he must serve God and the people with dignity and humility, and by his bearing and by the way he says the divine words he must convey to the faithful the living presence of Christ" (No. 93). An attitude of humility is consonant with Christ himself, meek and humble of heart. He must increase and I must decrease.

In proceeding to the altar, the priest must be humble, not ostentatious, without indulging in looking to the right and to the left, as if he were seeking applause. Instead, he must look at Jesus; Christ crucified is present in the tabernacle, before whom he must bow. The same is done before the sacred images displayed in the apse behind or on the sides of the altar, the Virgin, the titular saint, the other saints.

The reverent kiss of the altar follows and eventually the incense, the sign of the cross and the sober greeting of the faithful. Following the greeting is the penitential act, to be carried out profoundly with the eyes lowered. In the extraordinary form, the the faithful kneel, imitating the publican pleasing to the Lord.

The celebrant must not raise his voice and should maintain a clear tone for the homily, but be submissive and suppliant in prayer, solemn if sung. "In texts that are to be spoken in a loud and clear voice, whether by the priest or the deacon, or by the lector, or by all, the tone of voice should correspond to the genre of the text itself, that is, depending upon whether it is a reading, a prayer, a commentary, an acclamation, or a sung text; the tone should also be suited to the form of celebration and to the solemnity of the gathering" (GRIM, No. 38).

He will touch the holy gifts with wonder, and will purify the sacred vessels with calm and attention, in keeping with the appeal of so many saints and priests before him. He will bow his head over the bread and the chalice in pronouncing the consecrating words of Christ and in the invocation of the Holy Spirit (epiclesi). He will raise them separately, fixing his gaze on them in adoration and then lowering them in meditation. He will kneel twice in solemn adoration. He will continue with recollection and a prayerful tone the anaphora to the doxology, raising the holy gifts in offer to the Father.

Then, he will recite the Our Father with his hands raised, without having anything else in his hands, because that is proper to the rite of peace. The priest will not leave the Sacrament on the altar to give the sign of peace outside the presbytery, instead he will break the Host in a solemn and visible way, then he will genuflect before the Eucharist and pray in silence. He will ask again to be delivered from every indignity not to eat and drink to his own condemnation and to be protected for eternal life by the holy Body and precious Blood of Christ. Then he will present the Host to the faithful for communion, praying "Dominum non sum dignus," and bowing he will commune first, and thus will be an example to the faithful.

After communion, silence for thanksgiving can be done standing, better than sitting, as a sign of respect, or kneeling, if it is possible, as John Paul II did to the end when he celebrated in his private chapel, with his head bowed and his hands joined. He asked that the gift received be for him a remedy for eternal life, as in the formula that accompanies the purification of the sacred vessels; many faithful do so and are an example.
Should not the paten or cup and the chalice (vessels that are sacred because of what they contain) be "laudably" covered (GRIM 118; cf. 183) in sign of respect -- and also for reasons of hygiene -- as the Eastern Churches do? The priest, after the final greeting and blessing, going up to the altar to kiss it, will again raise his eyes to the crucifix and will bow and genuflect before the tabernacle. Then he will return to the sacristy, recollected, without dissipating with looks and words the grace of the mystery celebrated.

In this way the faithful will be helped to understand the holy signs of the liturgy, which is something serious, in which everything has a meaning for the encounter with the present mystery of God.
* * *

Father Nicola Bux is professor of Eastern Liturgy in Bari and consultor of the Congregations for the Doctrine of the Faith, for Saints' Causes, for Divine Worship and the Sacraments, as well as of the Office for the Liturgical Celebrations of the Supreme Pontiff.