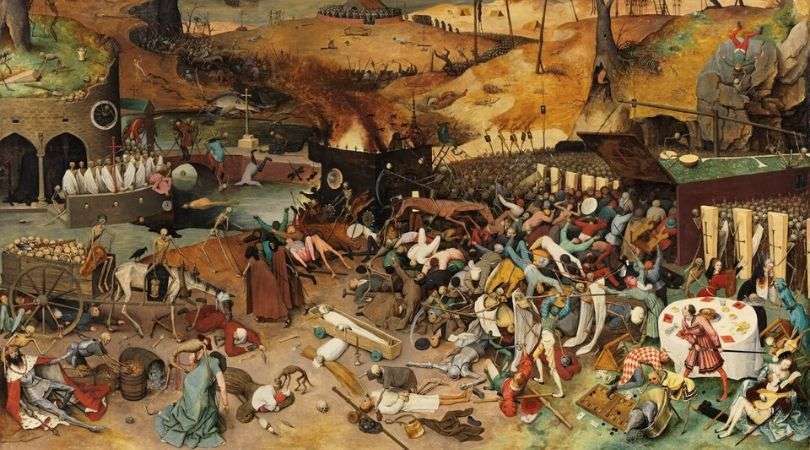 (Jules Gomes, Church Militant – May 22, 2020) Sacred Scripture, theologians, and saints are “univocal” in declaring that God punishes the three principal vices of men – pride, luxury and avarice with the three-fold scourge of war, plague and famine, an eminent Catholic historian has stated.
Speaking at the Rome Life Forum on Thursday, Prof. Roberto de Mattei castigated “men of the Church” who “today with ever greater force reject the idea of divine punishment.”
“When it is the very men of the Church who deny the idea of divine punishment, this means that the punishment is already underway and is irremediable,” de Mattei said, lamenting that bishops across the world were “rejecting punishment because they reject the judgment of God, which they replace with the judgment of the world.”
Quoting Abp. Mario Delpini of Milan who during the Wuhan virus pandemic claimed “it is a pagan idea to think God sends scourges,” de Mattei responded: “In reality, thinking that God does not send scourges makes someone not a pagan but an atheist. The fact that this is exactly what many bishops throughout the world think means that the Catholic episcopate throughout the world is immersed in atheism. And this is a sign of a divine chastisement that is already under way.”

The Italian historian, who recently authored Love for the Papacy and Filial Resistance to the Pope in the History of the Church, quoted Pope Pius XII’s words from the book of Revelation, which portray the second, third, and fourth horsemen of the apocalypse as war, hunger, and death, lamenting that the “primary forbidden topic” in the Catholic world today “is that of judgment and divine retribution in history.”
Distinguishing between a particular judgement after death and a universal second judgement as “an article of faith,” de Mattei explained how nations will also be judged since “nations are also called to fulfill the designs of Divine Providence and therefore must conform themselves to the divine will that rules and governs the universe.”
For individuals, “the reward or punishment may apply either during their earthly life or in eternity, but for nations, which do not have an eternal life, the reward or punishment can be applied only within the course of history,” he stressed. “All the misfortunes that strike the nations over the course of their history have a significance.”

Moreover, for both individuals and for nations, while “the universal judgment is the culminating moment of divine judgment, God does not limit Himself to judging only in that hour” but “He judges from the moment of the creation of the universe,” the historian, who has authored 30 books, pointed out.
And “whatever the secondary causes may be, God is always the first cause: everything depends on Him,” explaining how “in contrast to trials that befall individual men, evils that afflict nations are always punishments.”
“To say that a scourge could be ‘a trial’ for a nation does not make any sense. It could be a trial for the individual men of a particular nation, but not for the nation as a whole, because nations receive their punishment in time, not in eternity,” de Mattei elaborated.

“The punishments of a nation increase in proportion to the sins of a nation. And in proportion to the increase of their sins, the wicked also increase their rejection of the idea of punishment, as Voltaire did in his blasphemous Poem on The Disaster in Lisbon, written after the terrible earthquake that destroyed the capital of Portugal in 1755,” he added.
Professor de Mattei, who is director of the Lepanto Foundation, reiterated Mary’s warning at Fatima announcing “that if the world continued to offend God it would be punished through war, famine, and persecutions of the Church and the Holy Father and that ‘various nations will be annihilated.'”
“But today, one hundred years after the apparitions at Fatima … has the world ceased offending God?” he asked. “Is the divine law perhaps less transgressed, the Gospel less abandoned, the sanctuary less profaned?”
Do we not see sins that cry out for vengeance before the face of God such as abortion and sodomy justified, exalted, and protected by the laws of nations?” De Mattei pondered. “Have we not seen the Pachamama idol welcomed and venerated even within the holy precincts of the Vatican? Should all of this not be judged by God by now?”
Concluding with a note of hope, de Mattei echoed the words of Pope Pius XII observing that the first horseman of the book of Revelation, preceding the other three horsemen of war, hunger and death, was the Lord Jesus Christ riding with a crown on his head.
“The visionary-evangelist did not see only the ruin caused by sin, war, hunger, and death; he also saw first and foremost the victory of Christ,” he said. “And indeed the path of the Church down the centuries is but a via crucis, but it is also in every age a triumphal march.”