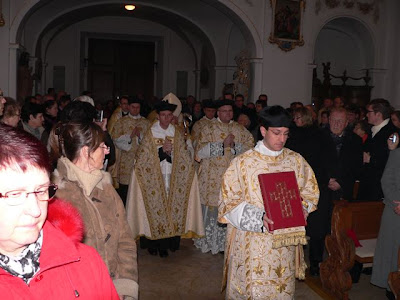 by Shawn Tribe
Fr. Sven Conrad, FSSP (whom some of you will recognize from some of the academic liturgical conferences we feature from time to time here) recently sent us news and photos of a priestly ordination in Bettbrun, Germany. Here is his account:

On Saturday, November 19th, H. E. Walter Cardinal Brandmüller ordained Fr. Christian Jäger, FSSP to the sacred priesthood. It was for this reason that His Eminence, who is bound up with the Priestly Fraternity of St. Peter since its very foundation in 1988, visited the small Bavarian village of Bettbrunn in the diocese of Regensburg. There the German-speaking district of the Priestly Fraternity of St. Peter runs a house in which some are dedicated to further studies in theology.

In fact, Cardinal Brandmüller is from the same town as Fr. Christian Jäger, FSSP, who was most happy to be ordained by a professor and Cardinal whom he has esteemed for a long time. The Bishop of Regensburg as well as the parish priest generously and warmly agreed that the ordination was held there.

The Solemn Pontifical Mass was celebrated in the parish church of Bettbrunn, which was originally a centre of Eucharistic pilgrimage in the 12th century. Today it hosts the shrine and statue dedicated to Our Lord himself as "Salvator mundi," the savior of the world.

The Cardinal arrived the day before, so there was enough of time for the consecration of chalices in the private chapel of the Fraternity. His Eminence very patiently attended a rehearsal of ceremonies in the church itself. We all were impressed at how careful he was to observe the sacred rites.

In the morning the cardinal was welcomed at the main door of the church by the parish priest and the mayor. He was led to the sacristy, where he was vested. The choir "Sonoritas," friends of the FSSP apostolate in Innsbruck, very beautifully sung Palestrina's Missa Papae Marcelli and the schola cantorum of the FSSP mother house at Wigratzbad sung the Propers of the Mass. According to a German local custom there were additionally hymns for the faithful. Seminarians and clergy of the FSSP served at the altar and about 60 priests attended in choir.

In his sermon, Cardinal Brandmüller pointed out that what would happen here is deeply linked to the Last Supper where Our Lord himself told his apostles: "Do this in remembrance of me!" It is a moment filled and enriched by eternity. The Cardinal focused on the priest as teacher, referring to the words of the ordination rite: "Sit doctrina vestra spiritualis medicina populo Dei; sit odor vitae vestrae delectamentum Ecclesiae Christi." Only the bishop, the priest and the deacon is entitled to preach. In our times we have – unfortunately – to be careful because of false prophets and wrong things preached even in sermons, but the faithful can be sure to find true teaching if it is in accordance to the catechism of the Catholic Church or the Youcat. 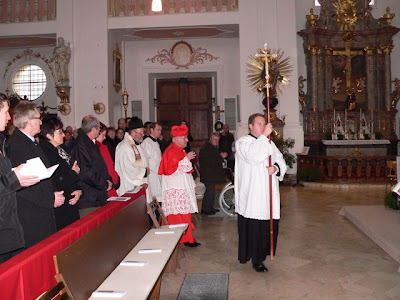 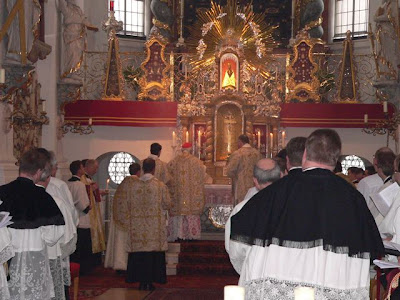 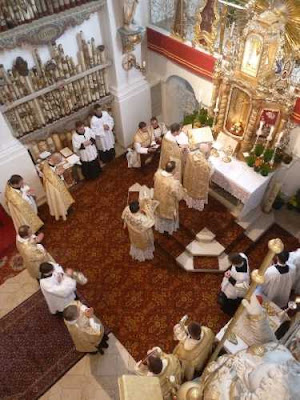 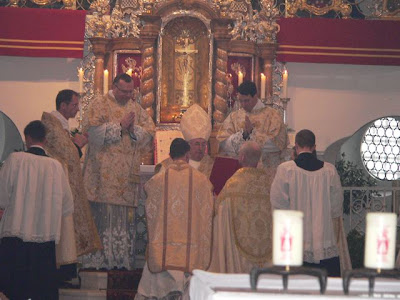 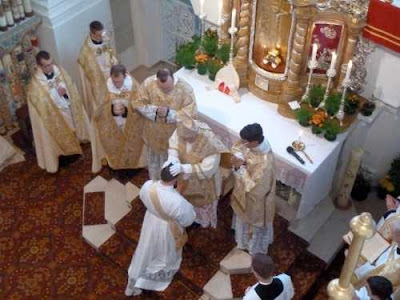 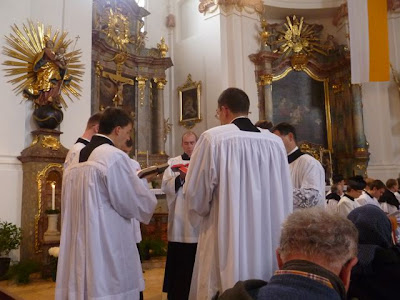 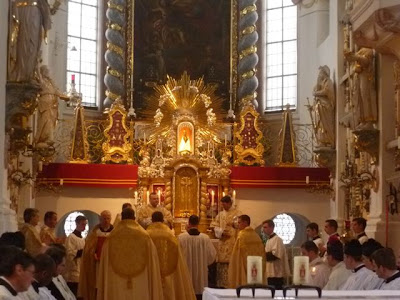