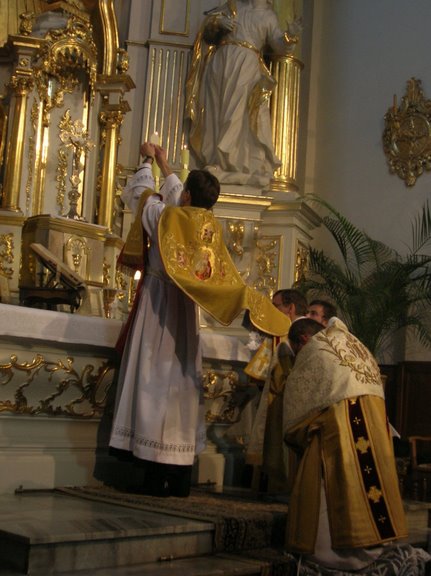 
The third of Bishop Athanasius Schneider's Principles of Liturgical Reform. The six principles themselves and what follows from them

III –The Six Principles of the Liturgical Reform

The Second Vatican Council put forward the following principles regarding a liturgical reform:

The Council Fathers saw their reform proposals as the continuation of the reform of Saint Pius X (Sacrosanctum Concilium 112 and 117) and of the servant of God Pius XII; indeed, in the liturgical constitution, Pius XII’s Encyclical Mediator Dei is what is most often cited.

Among other things, Pope Pius XII left the Church an important principle of doctrine regarding the Holy Liturgy, namely the condemnation of what is called liturgical archeologism. Its proposals largely overlapped with those of the Jansenistic and Protestant-leaning synod of Pistoia (see “Mediator Dei,” 63-64). As a matter of fact they bring to mind Martin Luther’s theological thinking.

For this reason, already the Council of Trent condemned Protestant liturgical ideas, in particular the exaggerated emphasis on the notion of banquet in the eucharistic celebration to the detriment of its sacrificial character and the suppression of univocal signs of sacrality as an expression of the mystery of the liturgy (see Council of Trent, session 22).

The magisterium’s doctrinal declarations on the liturgy, as in this case those of the Council of Trent and of the encyclical Mediator Dei and which are reflected in a centuries-old, or even millenia-old, liturgical praxis, these declarations I say, form part of that element of Holy Tradition that one cannot abandon without incurring grave spiritual damage. Vatican II took up these doctrinal declarations on the liturgy, as one can see by reading the general principals of divine worship in the liturgical constitution Sacrosanctum Concilium.

As an example of a concrete error in the thought and action of liturgical action, Pope Pius XII cites the proposal to give to the altar the shape of table (Mediator Dei 62). If already Pope Pius XII refused the table-shaped altar, one imagines how much more he would have refused the proposal for a celebration around a table “versus populum”!

When Sacrosanctum Concilium 2 teaches that, in the liturgy, contemplation has the priority and that the entire celebration must be oriented to the heavenly mysteries (ibid. 2 and 8), it is faithfully echoing the following declaration of the Council of Trent: “And whereas such is the nature of man, that, without external helps, he cannot easily be raised to the meditation of divine things; therefore has holy Mother Church instituted certain rites, to wit that certain things be pronounced in the mass in a low, and others in a louder, tone. She has likewise employed ceremonies, such as mystic benedictions, lights, incense, vestments, and many other things of this kind, derived from an apostolic discipline and tradition, whereby both the majesty of so great a sacrifice might be recommended, and the minds of the faithful be excited, by those visible signs of religion and piety, to the contemplation of those most sublime things which are hidden in this sacrifice” (Session 24, chap. 5).

The Church’s magisterial teachings quoted above, especially Mediator Dei, were certainly recognized as fully valid by the Fathers of the Council. Therefore they must continue to be fully valid for all of the Church’s children even today.
source