The canonization of Archbishop Fulton Sheen moved a step closer today as the official document outlining his cause – known as a “positio” - was presented to Pope Benedict XVI. 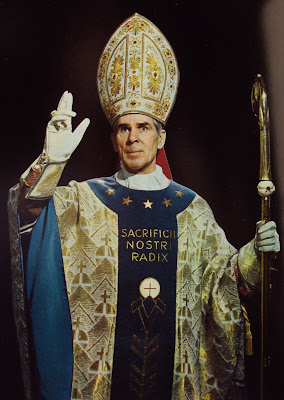 Archbishop Fulton Sheen
Vatican City, May 25, 2011 / 12:58 pm (CNA/EWTN News).- The canonization of Archbishop Fulton Sheen moved a step closer today as the official document outlining his cause – known as a “positio” - was presented to Pope Benedict XVI.
“America is in need of a saint like Archbishop Sheen. He brought so many people closer to Christ during his life here on earth and continues to do so even today through his many writings, television and radio shows,” said Father Andrew Apostoli, Vice Postulator for the cause.
Archbishop Sheen was born in El Paso, Ill. in 1895 and ordained a priest in the Diocese of Peoria in 1909. Appropriately, it was Bishop Daniel Jenky of Peoria who presented the positio to Pope Benedict at the conclusion of his weekly audience in St. Peter’s Square. The book was bound in white silk and summarizes the life and holiness of the late archbishop.
The positio will be filed formally with the Congregation for Saints’ Causes as the initial step in the Vatican’s process to determine whether Archbishop Sheen should be beatified and canonized.
“Once the Congregation for Saints’ Causes officially approves the Positio they will begin the investigation into an alleged healing,” said Monsignor Stanley Deptula, executive director of the Archbishop Fulton Sheen Foundation.
The healing in question involves a 72-year-old Illinois woman’s recovery from major complications during lung surgery. Her husband had prayed for the intercession of Archbishop Fulton Sheen.
Archbishop Sheen is most widely known for his appearances on television programs in the 1950s and 1960s.
It was this aspect of his life that was highlighted by many bishops from around the globe who submitted letters to the Pope today. Each explained why they support the canonization bid.
Cardinal Pell of Sydney, who is presently in Rome, told the Australian Catholic newspaper The Record on May 18 that he admired Archbishop Sheen’s “skill at harnessing the media to present Catholic teaching in a compelling and faithful way.”
“I’m also impressed by the number of people from many walks of life who have been moved by Archbishop Sheen’s example and teaching.”
“Archbishop Sheen had a gift for touching the lives of people in enormously varied circumstances and states of life.”
“This gift continues to be evident through the inspiration his writings provide to people today,” Cardinal Pell said.
Archbishop Fulton J. Sheen died in 1979. His cause for sainthood was officially opened in 2002. He is presently referred to as a “Servant of God.” The next major step toward being declared a saint would be his beatification by the Pope.