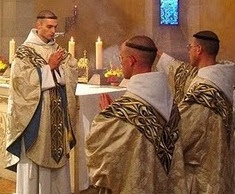 The debate about Vatican II, rupture and continuity continues on Chiesa with a monk of the Abbey of Le Barroux, Dom Basile Valuet, OSB, weighing into the discussion.

In recent weeks, www.chiesa has given voice to a very lively discussion on the acceptance or rejection of this criterion. A discussion born from the "disappointment" of some traditional thinkers over the way in which Benedict XVI insists on defending en bloc Vatican Council II, which in their judgment should instead be corrected where it has "broken" with the Tradition of the Church.

The following is a new contribution to the discussion. It is by Dom Basile Valuet, a Benedictine theologian of the abbey of Le Barroux, in France, between Provence and the Alps.

The article may be found here.