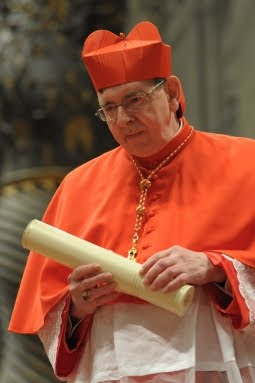 Cardinal Koch : "The rigid conservatism of many progressives".

I copy below an article on Zenit which I think speaks very eloquently about what the Holy Father is trying doing in regard to the Traditional Form of the Roman Rite. My guess would be that leading figures in Rome speaking so clearly after the publication of Universae Ecclesiae is meant to signpost futher what the Holy Father wants us all to do. I particularly like the phrase of Cardinal Koch when speaking of the "rigid conservatism of many progressives". Ouch!

Benedict XVI's decision to regulate the celebration of the Mass in its extraordinary form is more than a concession to certain groups of "nostalgic" faithful, says Monsignor Guido Pozzo.

In fact, the secretary of the Pontifical Commission "Ecclesia Dei" said, it is the beginning of a new liturgical movement desired by the Pope, which must be perceived by the Church as "a sign of hope."

The priest made this reflection on Saturday in a symposium at the Pontifical University of St. Thomas Aquinas in Rome. The congress centered on the Motu Proprio "Summorum Pontificum," after the publication on Friday of the instruction "Universae Ecclesiae," regarding the application of this 2007 document.

Taking part in the symposium, titled "A Hope for the Whole Church," were speakers such as Cardinal Antonio Cañizares, prefect of the Congregation for Divine Worship and the Sacraments, as well as Cardinal Kurt Koch, president of the Pontifical Council for Promoting Christian Unity.

In Monsignor Pozzo's intervention, published in Sunday's edition of L'Osservatore Romano, he explained the meaning of the instruction, which puts within the reach of all the faithful the rich liturgical patrimony.

The Pope's decision, stressed the priest, is in continuity with "Sacrosanctum Concilium," which affirmed "equal right and honor to all legitimately recognized rites, and wants them preserved in the future and in some way increased."

Now, both forms of the Roman liturgy "are an example of reciprocal increase and enrichment," he stressed. "Whoever thinks or acts otherwise, stains the unity of the Roman rite, which must be tenaciously safeguarded."

Monsignor Pozzo reiterated that "Universae Ecclesiae" must not be understood as an "indult" or "a law for particular groups," but as "a law for the whole Church."

He stated, "The well-known principle lex orandi-lex credendi is at the base of the re-establishment of the extraordinary form: the Catholic doctrine of the Mass in the Roman rite has not changed, because liturgy and doctrine are inseparable."

In each form there can be "accentuations, underscoring, assertions more marked in some aspects in regard to others, but this does not affect the essential unity of the liturgy," the priest explained.

Moreover, he said that the liturgy is "matter reserved for the Pope" and that in the Pontiff's letter to bishops accompanying "Summorum Pontificum" he stressed that "there is no contradiction whatsoever between the two."

The Holy Father "wants to help all Catholics to live the truth of the liturgy so that, knowing and participating in the old Roman form of celebration, they understand that 'Sacrosanctum Concilium' wished to reform the liturgy in continuity with tradition," Monsignor Pozzo said.

For his part, Cardinal Koch said that the Motu Proprio "will mean steps forward in ecumenism" only if both forms of the one Roman rite are not considered as "an antithesis" but "as mutual enrichment."

In this sense, he explained that the ecumenical problem "is found in this essential hermeneutic question."

Those who see in "Summorum Pontificum" a step backwards do so because "they understand the post-conciliar liturgical reform as a point of arrival, which must be defended, according to the rigid conservatism of many progressives," explained the cardinal.

"In fact," he added, "they prefer to uphold the hermeneutics of discontinuity and rupture, regarded as inadequate by the Pope, applying it especially to the field of the liturgy and of ecumenism."

The prelate noted that the decree on ecumenism also marked a new beginning in relations of the Catholic Church with the other Christian confessions, but "this ecumenical change must not imply a rupture with tradition; rather, it is inscribed in a continuity with tradition."

Herein "lies the fundamental question for the future of the Catholic Church and, at the same time, for the credibility of its ecumenism," Cardinal Koch pointed out, adding that "Summorum Pontificum could be a really solid ecumenical bridge if it is perceived and received as a hope for the whole Church."

He explained that the Pope "believes that a new liturgical movement is indispensable today," which in the past he himself described as "a reform of the reform of the liturgy."

Hence, he said, "also necessary today is a new liturgical movement, which has as its objective to make fruitful the true patrimony of the Second Vatican Council in the present situation of the Church, consolidating at the same time the theological foundations of the liturgy."

Therefore, the cardinal asserted, not only is "the revitalizing of the Christological primacy, of the cosmic dimension and of the character of adoration of the liturgy" necessary, "but also and above all the rediscovery of the basic meaning of the paschal mystery in the celebration of the Christian liturgy."

According to the cardinal, the Motu Proprio "is only the beginning."

He noted that "Benedict XVI knows well that in the long term we cannot remain with a coexistence between the ordinary and extraordinary forms in the Roman rite, but that the Church will again need in the future a common rite."

"However," he said, "given that a new liturgical form cannot be decided in an office, as it requires a process of growth and purification, for the time being the Pope stresses above all that the two forms of use of the Roman rite can and must enrich one another mutually."

Among other things, he suggests that in the novus ordo "that sacredness that attracts many to the old use must manifest itself more forcefully," Cardinal Koch affirmed.

He added, "The most certain guarantee that Paul VI's missal will be able to unite parish communities and be loved by them consists in celebrating with great reverence and in conformity with the prescriptions, which makes visible the spiritual richness and theological profundity of the missal."

In regard to the Eucharist as a sacrifice or a banquet, he noted, the Catechism of the Catholic Church keeps united what is indivisible: "The Mass is at the same time and inseparably the memorial of the sacrifice in which the sacrifice of the cross is perpetuated, and the sacred banquet of communion of the Body and Blood of the Lord."

In regard to the subject of the liturgy, Cardinal Koch acknowledged that in the course of history the original role of all the faithful as co-subjects of the liturgy decreased little by little, and the divine office in community of the early Church, in the sense of a liturgy that saw the whole community participating, had increasingly assumed the character of a private Mass of the clergy.

"The existence of a profound continuity between the old liturgy and the liturgical reform undertaken by the Second Vatican Council is seen in the wide and profound vision of the liturgical constitution, according to which integral public worship is exercised by the Mystical Body of Jesus Christ, namely, by the head and the members," he said.

In regard to the third debate on adoration and participation, the cardinal said that it is a "false contrast," as "already St. Augustine himself affirmed that no one can eat 'this flesh' unless he first adored it."

The prelate continued, "The post-conciliar liturgical reform is considered in large circles of the Catholic Church as a rupture with tradition and as a new creation," which has caused "a controversy over the liturgy that, lived in an emotional way, continues to be felt today."

That is why the Pope "wished to contribute to the resolution of this dispute and to reconciliation within the Church: the Motu Proprio promotes, so to speak, intra-Catholic ecumenism," he noted.

However, the prelate added, this presupposes that the old liturgy "is also understood as an 'ecumenical bridge.'"

"In fact," he concluded, "if the intra-Catholic ecumenism fails, the Catholic controversy over the liturgy will also extend to ecumenism, and the old liturgy will not be able to carry out its ecumenical function of bridge-building."
http://offerimustibidomine.blogspot.com/