Two Participants in Sunday's Pontifical Mass in St. Peter's . The First Mass for Artists, Church of Our Saviour, NYC


We have already seen quite a bit from Sunday's Solemn Pontifical Mass at the altar of the Chair in St. Peter's Basilica (cf. posts here and here). Today I would like to point out two of the priests involved in the celebration, whose participation is significant given their other functions.

One acted as assistant priest to Cardinal Brandmüller: 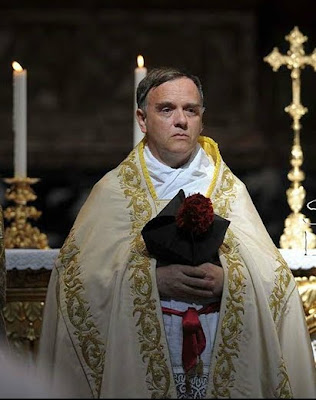 It is Msgr. Nicolas Thévenin, one of the seven Protonotaries Apostolic de numero participantium, a prelate of the Prefecture of the Papal Household, and a memeber of the Community of Saint Martin which has regularly been featured on the NLM.

The other acted as one of the familiares, who assist the bishop during Pontifical Mass at the washing of the hands: 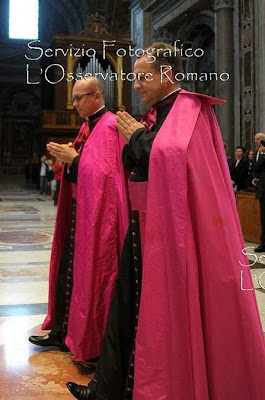 To the left in the picture above (the other one being Msgr. Patrick Descourtieux, Official of the Pontifical Commission Ecclesia Dei), it is Msgr. Marco Agostini, one of the Papal Masters of Ceremonies. Here we see him in this rôle with His Holiness Pope Benedict: 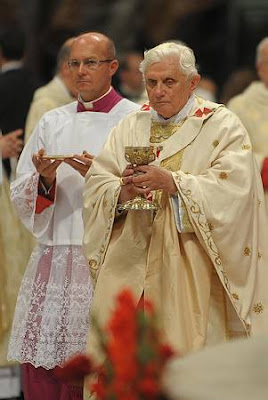 From the moment a Cardinal is created at a Consistory, the Master of Papal Liturgical Celebrations assigns to his person one of the Office's Masters of Ceremonies. Msgr. Agostini is assigned, among others, to Cardinals Burke and Ranjith. At the latter's taking possession of his Roman titular church we have actually seen both Monsignors on the NLM before: 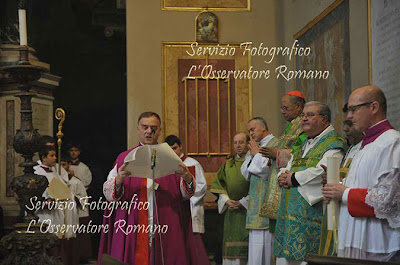 To the left we see Msgr. Thévenin as Protonotary Apostolic reading the papal bull,
and to the right Msgr. Agostini is acting as Card. Ranjith's MC.

Here are a few more photographs showing both at Sunday's Pontifical Mass. The familiares - Msgr. Agostini to the left - leave after having assisted Card. Brandmüller at the second washing of hands (after the reading of the Offertory; the first is before the prelate puts on the vestments), while Msgr. Thévenin puts the ring back on the Cardinal's finger: 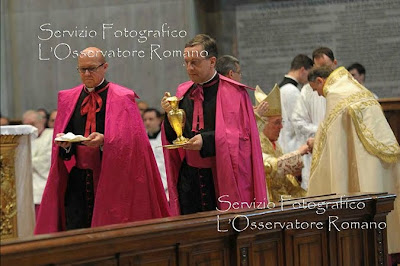 The same situation, but after the third hand washing (after the censing of the oblata; the fourth and last is after Communion): 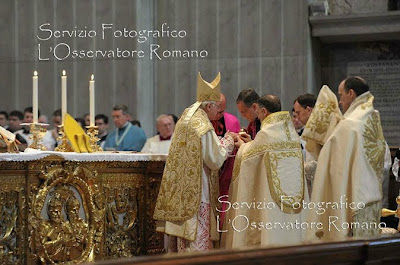 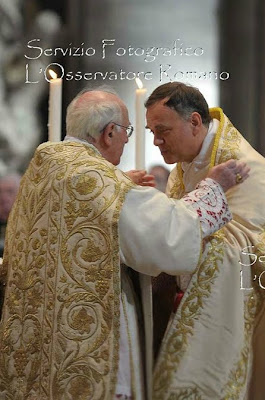 At the recessional, celebrant and ministers - Msgr. Thévenin to the bishops right - pass the papal altar: 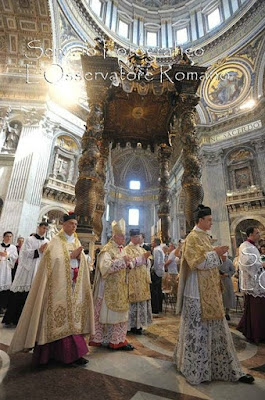 The First Mass for Artists, Church of Our Saviour, NYC

We mentioned here a few days back and one other time before that the Mass for Catholic Artists which was being held at Fr. George Rutler's Parish of Christ the Saviour in New York City.

The Society of St. Hugh of Cluny has published a post on the event and give this summation:

... the Catholic Artists Society sponsored its first Solemn High Mass for Artists at Our Saviour’s Church on Park Avenue in New York. A capacity congregation, very proficient in singing the responses, filled the church. But that seems to be the rule for Solemn Masses at this parish. David Hughes led the schola of St. Mary’s Norwalk and Herve Duteil was the organist – need we say that the music was splendid? (Missa super Credidi Propter by Orlando di Lasso and works by Palestrina, Philips, Vaughan Williams, Bach and Messiaen)

As already noted, there always seems to be a full house for a Solemn mass at Our Saviour’s. But the Catholic Artists Society has succeeded in bringing most of them down to the lecture hall as well. It was heartening to see so many artists – and would-be artists – especially given the nonexistent Catholic presence in the arts in New York. Perhaps these artists have only been waiting for something like the Catholic Artists Society to come along to draw them all out of the woodwork. In any case, we will be hearing more from this Society in the near future…..

A few photos of the Mass and the conference. 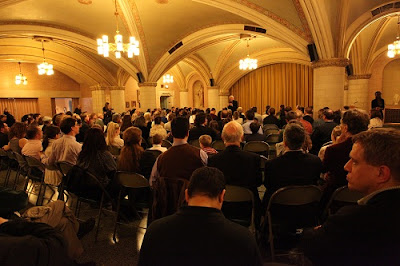 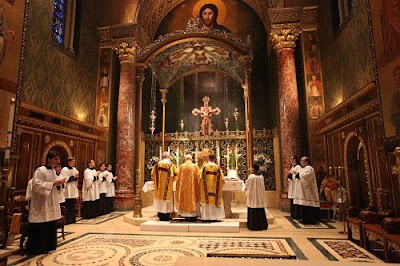 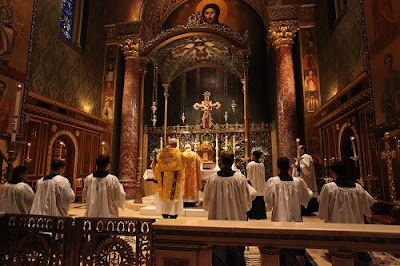 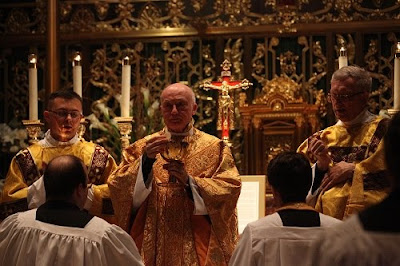 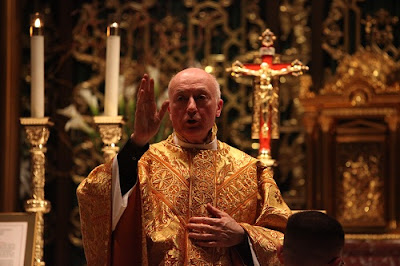