"Benedict XVI has dared to do it." | The Preface to The Old Mass and The New: Explaining the Motu Proprio Summorum Pontificum of Pope Benedict XVI | Bishop Marc Aillet | Ignatius Insight 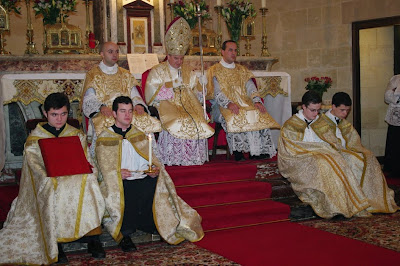 Benedict XVI has dared to do it. Announced as forthcoming for months, awaited by some with frantic impatience, dreaded by others with some anxiety, the motu

proprio was finally published on July 7, 2007, with the title of Summorum Pontificum. It was accompanied by a personal letter from the Pope to the bishops, to explain the reasons for his decision. [1]

The press, whether ill-informed or ill-intentioned, denounced the victory of traditionalist pressure groups, considerably overestimating their influence on the Pope, who is said to be "conservative". It said nothing, on the other hand, about the pressure that may have been brought to bear on him to try to modify his decision: people had even brandished the politico-religious specter of the encouragement that would supposedly be given to the extreme right, since the sociological context of our country was so far beyond the insight of the Roman Curia. [2] In any case, it was the first time in thirty years that some fear for the authority of the bishops where liturgy was concerned [3] and that some objected to the risk of "subjectivism" in the way it was celebrated. And then it was necessary to reassure the directors of the reform, whose goodwill can rightly be acknowledged but who had been sent to work with so little liturgical formation.

The Pope felt quite free to take his time. After "much reflection [and] numerous consultations" and not without having "invoked the Holy Spirit and trusting in the help of God", he made his decision: the old and new Missals are called to coexist in the Church, the first as the extraordinary form, and the second as the ordinary form, of the single Roman rite. People got upset, and certain bishops even gave warm expression to their "perplexity" . Yet after a few weeks the excitement subsided, and everyone agreed to respect a desire for communion that cannot be rejected. In any case, for the moment, no one has been inundated with requests.

For some, the motu proprio is a victory; for others, a non-event. There is no doubt it is in the first place a gesture toward "coming to an interior reconciliation in the heart of the Church", made in the direction of some of the faithful who have great difficulty in living their communion in practice. Might not this kind of disciplinary measure, which assuredly has a highly symbolic value, nonetheless have the salutary effect of drawing the attention of both pastors and faithful toward taking more trouble about the dignity and the sacral nature of liturgical celebration? Might not this motu proprio quite simply have the purpose of relaunching the liturgical movement, which, as we certainly have to admit, had become somewhat bogged down in the marshy meanderings of unbridled creativity and arbitrary distortions? That is the view I shall take in these pages.