New Traditional Carmelite Foundation in Brazil : Via our Brazilian friends at Salvem a Liturgia! ("Save the Liturgy!"), we receive the welcome news that in the Diocese of Bragança Paulista (state of São Paulo, Brazil) exists a new Carmelite foundation of diocesan right - the Hermits of the Blessed Virgin Mary of Mount Carmel (Irmãos Eremitas da Bem-aventurada Virgem Maria do Monte Carmelo - ECarm) - which after the publication of the motu proprio Summorum Pontificum, with the consent of their bishop, adopted the traditional Carmelite rite in 2009. Here is an NLM translation of an interview which Salvem a Liturgia! did with the prior of the monastery, Fr. Tiago de São José, ECarm: 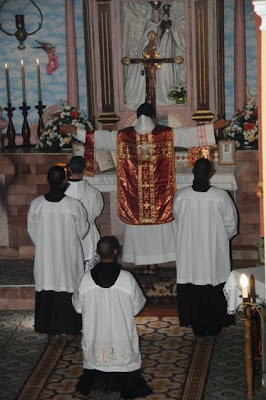 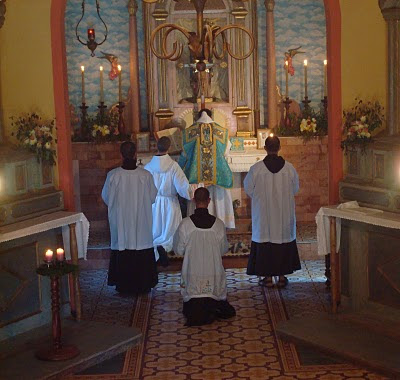 Reverend Father, we see that this is a new congregation, not part of the OCarm or OCD. Are we correct in our impression?

Yes we are a new foundation, but it is a restoration of the original monastic charism of the Carmel that had already been lost since the end of the thirteenth century. St. Teresa [of Avila] actually wanted to recover it by proposing to follow the primitive rule in her discalced reform. However, in the mid-nineteenth century, Blessed Francisco Palau, led by a mystic revelation, founded the eremitic Carmel in Spain with the same objective. This group existed until the 30s. We are now beginning anew with the same constitutions he wrote.

Are there other monasteries of this institute in Brazil and the world?

The Carmelite monks in the USA are of the same congregation as you, or is that a separate institute?

They are a separate institute despite having originated during the same time with the same key elements of the charism. We were interested in a possible union, however, we do not agree with some of their positions. For instance, we do not sell anything, we do not ask for money for anyone; we do not want to build great abbeys, but poor and simple hermitages; we do not have such an intense common life, that is, we emphasize solitude more.

You celebrate the proper liturgy of the Carmelite rite. What is the reason that led you to this?

The main reason is this: there is no way we could identify with the first Carmelites following the primitive rule if we did not celebrate the same liturgy, since the liturgy is an essential part of our lives.

The Carmelites of the Ancient Observance (OCarm) and the Discalced (OCD) still use this rite, even if [only] sporadically?

The Discalced renounced the proper liturgy itself since the publication of the post-Tridentine Carmelite missal (1585). However, the Carmelites of the Ancient Observance preserved the rite of the Holy Sepulchre of Jerusalem until 1971. After this date they could no longer celebrate it, not even sporadically, according to the decision of the General Chapter. They argued that the Rite was inappropriate for their parish activities. Since we have no parish, but live in monasteries, the rite for us is perfectly welcome.

Could you describe some particularities of this rite?

One peculiarity is that the introit psalm is prayed by the priest in silence. The first words after the beginning are: Confitemini Domino quoniam bonus, quoniam in sæculum misericordia ejus. This sentence introduces us into the liturgy of the Resurrection, because the rite was born in the Holy Sepulchre. However, this makes the rite loaded with more than 50 crosses made in various forms and marks the force of Calvary.

How did you learn the rite? Do the liturgical books and rubrical manuals still exist?

The missal itself has the rubrics and the different variations. We also saw a video of a Mass celebrated in the 50s that helped us improve some aspects of the solemn liturgy.

What are the fruits of this liturgy well celebrated in the monastery and in the life of the faithful who visit you?

For me, celebrating this rite since October last year has greatly increased my priestly spirituality. In the other brothers we also notice an increases of piety and introspection. Also in the people we have seen many spiritual fruits.

Do you perhaps also use the ancient Roman rite? And the modern Roman rite? If you do, is it in Latin or in the vernacular?

No. We celebrate only the Carmelite Rite or Rite of the Holy Sepulchre, all in Latin.

Your Mass is versus Deum, correct? What could you tell us about this orientation?

We are accustomed to call it that, but the real orientation is versus orientem, ie, facing the east. Thus the Church in the early times celebrated the Eucharist. There are many who want to enhance the people's participation and therefore turn around to face the people. The Church has never known this. Preaching is for [towards] the people. The sacrifice is to [towards] God the Father, with the people, "through Christ, with Christ and in Christ." 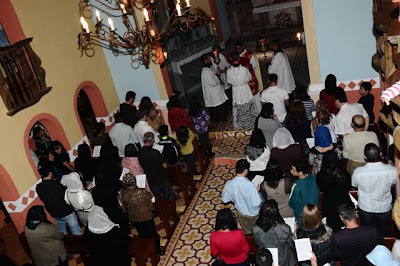 How to recover an authentic liturgical spirituality in Brazil? The faithful are thirsting for a piety that is born of the Eucharist, don't you think?

I believe so, too. I also see Brazil as a vast storehouse of vocations. But the ignorance of the clergy and the people makes this task a very tough challenge, but the grace of the Holy Spirit helps us.

What are the plans of your Caramel? Do you plan to build new houses in Brazil?

I was ordained priest in 2000 and wanted to celebrate the traditional rite. I had no chance or opportunity. I went to Italy and France, but was not happy away from my nation.

I entered into this Carmel in 2002, which had recently been founded by a Discalced Carmelite I already knew. This superior had good intentions about using the habit and living the rule, but did not accept the traditional liturgy. Finally, in 2007, he went to his diocese and became a secular priest.

I stayed alone, and last year we structured things and started getting vocations. I believe it is a work of Our Lady and feel we have the potential to grow much. She knows best ...

Finally, a word to members and blog readers, and a piece of advice to those who want to "save the liturgy."

I ask God to bless all who seek with zeal to save the liturgy, because that means saving the Church. The Church's enemies know this ... So let us go ahead to rebuild the altars of the Lord!
fonte:new liturgical movement