The Mass as a Sacrifice 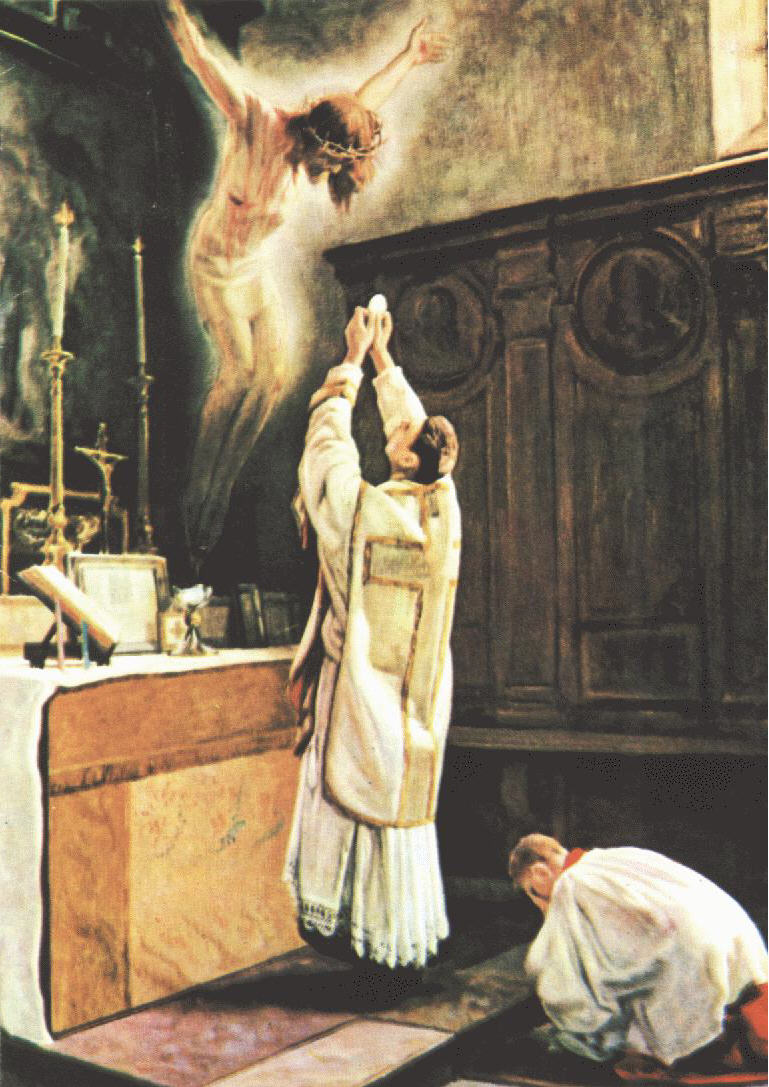 The Mass as a Sacrifice:

First and foremost, the Mass is a Sacrifice and second it is a Sacred Meal. In the Old Testament, people would frequently offer sacrifices to God include animals in atonement for their sins as was prescribed by the law of Moses. This was done by the priests of the Old Testament. However, as children of the New Testament, we offer to God the only true Sacrifice - Jesus Christ. Jesus is the Lamb of God because He was the sacrifice that paid the price for all of our sins; it is written "Through one man sin entered the world and through sin death." Christ came and died for all of our sin and rose victoriously over death in order to restore us to new life. Because of Jesus' death and Resurrection, all of us may have the chance to enter Heaven. We remember this at every Mass. Jesus, though, spoke about His Body and Blood many times before His death as in John chapter 6, but the people there didn't understand Him.

As the Council of Trent as affirmed, the Mass is the "true and proper sacrifice." As with any sacrifice, there are four necessary components: a sacrificial gift (res oblata), a sacrificing minister (minister legitimus), a sacrificial action (actio sacrificica), and a sacrificial end or object (finis sacrificii). First, the res obltata, or sacrificial gift, must be physical and real. In the Old Testament it consisted of animals offered up to God. Today at the Mass we offer to the Father one sacrifice - His Son. Second, only a qualified person can offer the sacrifice, and that is a priest. In the Old Testament priests were to come only from the Tribe of Levi, in particular from the House of Aaron. Similarly, priests of the Holy Catholic Church must be males. The priest not only offers the Sacrifice of Jesus truly present, but the priest acts in the person of Christ. Thus, he acts in persona Christi, so when the priest says the words of Consecration, it is not the priest speaking but rather Jesus speaking through the priest. And because Jesus was male, all priests must be males. Third, the sacrificial action of the Old Testament was the spilling of the blood of animals. In the New Testament, it is Jesus' voluntary surrender of His Blood and the offering of His life. Finally, the object of Sacrifice is to be offered solely to God for His honor and glory. Such an offering is lifted into the realms of the Divine.

Just as Melchizadek brought forth bread and wine ("bringing forth bread and wine, for he was a priest of the Most High God..."), Jesus instituted the Eucharist as a Sacrifice at the Last Supper. Thus, we again see the importance of the continuity of the Old and New Testaments. Jesus did not come to destroy the Old Covenant but instead, to fulfill it (Matthew 5:17) and establish a new and greater one with His Body as the true and lasting Sacrifice.

The tearing of the temple veil is the final sign of the Sacrifice of Jesus on the Cross. The veil in Old Testament was of thick linen that separated the Holy of Holies from the rest of the temple. In particular, it was so holy that a priest could only walk in the temple one day a year. And he would even have a rope tied around his ankle. If the priest died in the temple, he was pulled from the temple using the rope because if someone were to enter the temple, he would die. The tearing of the veil (Matthew 27:51) signified a new Sacrifice and the completion of the redemptive work of Christ. Now mankind could enter in God's presence and offer to God their sufferings, prayers, etc if they were united spiritually with the Cross.

"The Mass in fact truly makes present the sacrifice of the Cross. Under the species of bread and wine, upon which has been invoked the outpouring of the Spirit who works with absolutely unique power in the words of consecration, Christ offers Himself to the Father in the same act of sacrifice by which He offered Himself on the Cross. 'In this divine sacrifice which is accomplished in the Mass, the same Christ who offered Himself once and for all in a bloody manner on the altar of the Cross is contained and is offered in an unbloody manner'. To His sacrifice, Christ unites the sacrifice of the Church: 'In the Eucharist the sacrifice of Christ becomes also the sacrifice of the members of His Body. The lives of the faithful, their praise, sufferings, prayer and work, are united with those of Christ and with his total offering, and so acquire a new value'. The truth that the whole community shares in Christ's sacrifice is especially evident in the Sunday gathering, which makes it possible to bring to the altar the week that has passed, with all its human burdens" (Pope John Paul II)read...