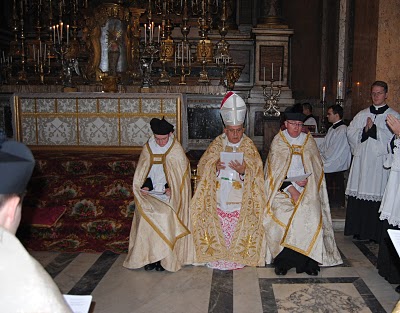 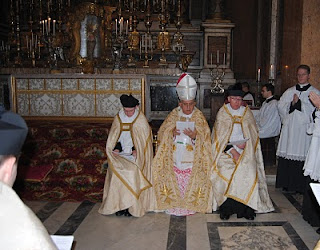 [photo] Archbishop Augustine Di Noia, O.P
"The Pontifical Commission 'Ecclesia Dei' was established in 1988 by Blessed John Paul II to facilitate 'full ecclesial communion of priests, seminarians, religious communities or individuals until now linked in various ways to the Fraternity founded by Archbishop Lefebvre' and to promote the pastoral care of the faithful attached to the ancient Latin liturgical tradition of the Catholic Church. In 2009, the Pontifical Commission was structurally linked to the Congregation for the Doctrine of the Faith to address the doctrinal issues in the ongoing dialogue between the Holy See and the Priestly Fraternity of St. Pius X.
"As a respected Dominican theologian, Archbishop Di Noia has devoted much attention to these doctrinal issues, as well as to the priority of the hermeneutic of continuity and reform in the right interpretation of Vatican Council II - a critically important area in the dialogue between the Holy See and the Priestly Fraternity. Under the guidance of Cardinal Levada, with the assistance of Msgr. Guido Pozzo, secretary of the Pontifical Commission, this dialogue has been ongoing over the past three years.
"Previously, Archbishop Di Noia served as secretary of the Congregation for Divine Worship and the Discipline of the Sacraments where, together with the prefect, Cardinal Antonio Canizares, he oversaw the reorganisation of the dicastery and the preparation of a new 'Regolamento' following the directions of Pope Benedict's 'motu proprio' of 30 August 2011, 'Quaerit Semper'. Archbishop Di Noia's experience and continued association with the Congregation for Divine Worship will facilitate the development of certain desired liturgical provisions in the celebration of the 1962 'Missale Romanum'.
"In addition, the broad respect that Archbishop Di Noia enjoys in the Jewish community will help in addressing some issues that have arisen in the area of Catholic-Jewish relations as the journey towards the reconciliation of traditionalist communities has progressed".