The Collegium Sancti Liturgicum Ambrosii Episcopi in Legnano have recently launched a new website and as part of that site, have also recently posted photographs of Mass offered this past Sunday, October 17th, in the Chiesa di Sant’Ambrogio Vescovo in Legnano, celebrated by Msgr. Attilio Cavalli, a Major Penitentiary Emeritus of the Duomo of Milan as well as a Canon of the same.

While many of our long-standing readers will be already familiar with some of the ceremonial variances of the Ambrosian liturgical tradition, for the sake of those newer to it, I will try to identify some of the elements which are visible in the photographs. (For more and for more thorough information on this, I would recommend a search on the NLM of "Ambrosian rite" which will bring up many articles by our resident Ambrosian rite expert, who is also resident within the Archdiocese of Milan, Nicola de Grandi.) 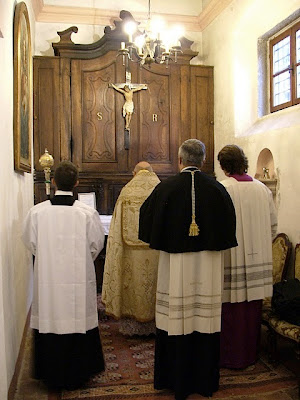 In the sacristy before Mass 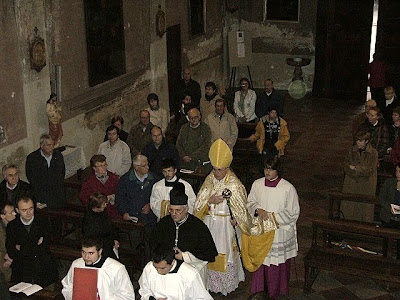 The Procession. You will note two things here. One, the use of the golden mitre by the Monsignor, and the second, the use of a staff with an orb shape atop of it, called the ferula. Canons of the Metropolitan Chapter traditionally had the right to wear pontificals, such as the mitre for example, for certain liturgical occasions -- normally Solemn Masses. The Ferula was also used for more solemn celebrations, a dignity given to the Canons, parish priests within the city of Milan, and to the parish priests of certain other distinguished parishes within the Archdiocese of Milan. 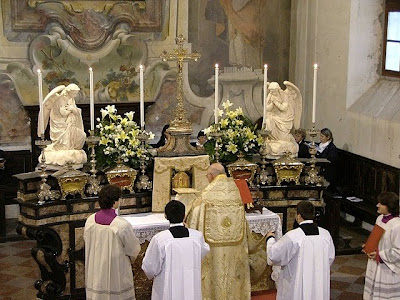 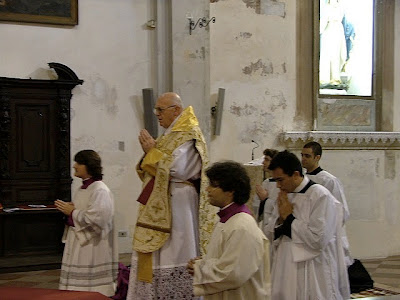 Prayers at the Foot of the Altar; there are a few points about vestments here worth noting, but I will speak to them in the later photographs where they are more visible. 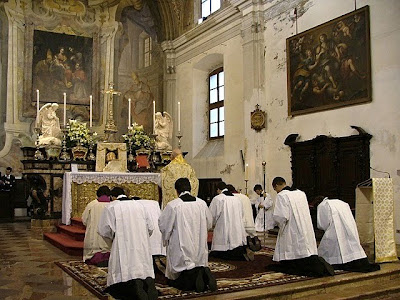 One will note all of the servers who kneel before the altar. 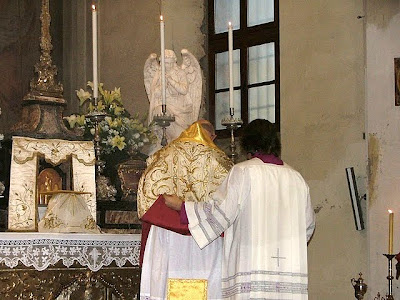 Incensation of the Altar. You will note here how the chasuble is lifted during the incensations. Also observe on the alb, the golden, rectangular piece called the grammatae which is derived from the historical apparel at the base of the alb. While not visible in any of the photos shown here, I would also mention that the thurible would be uncapped; that is, having no "lid" or top so to speak. 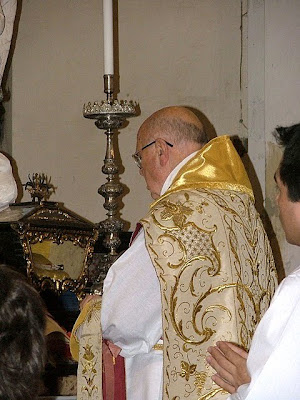 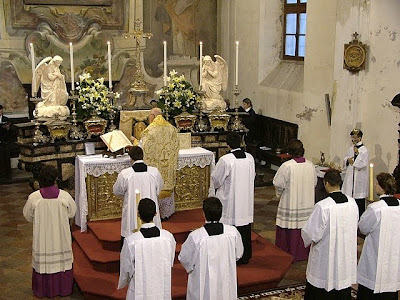 We now skip ahead in our photos to the Offertory and Canon of the Mass. 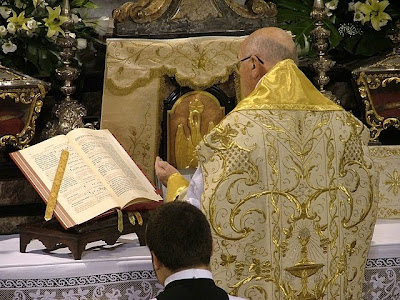 This image gives a good view of the cappino worn around the neck, which, like the grammatae, is also a remnant derived from an apparel; the appareled amice. One can also just see the ornamental cuffs. 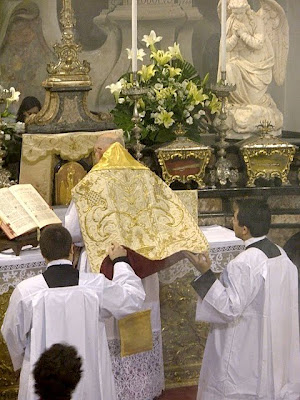 Consecration. Once again, note the grammatae. 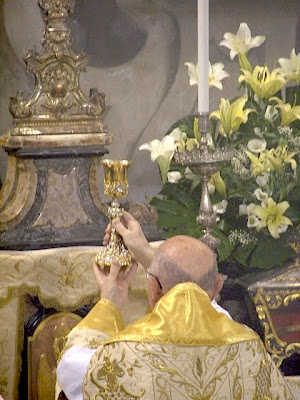