Paolo Rodari of "Il Riformista" today has an interview with Msgr Guido Marini, Master of the Liturgical Celebrations of the Supreme Pontiff. The interview is most insightful, especially as to the rationale behind the changes in papal celebrations we have witnessed. Don Guido also presents his view on Summorum Pontificum. Here is the complete interview in my translation: 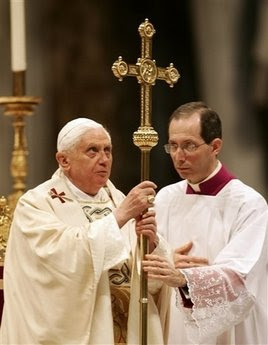 "The very first reaction was great surprise and great fear. Then I felt a certain trepidation the night before beginning my service, and I also very much felt the separation from my diocese and my city, my sister and her family, from so many friends, from the places where I have exercised my priesthood in a special way: the [Genoese] curia, the seminary, the cathedral. At the same time, however, I felt much honoured to be called by the Holy Father to perform the service of Master of Liturgical Celebrations. The possibility I have been given to be near the Holy Father I have felt immediately to be a true grace for my priesthood."

Monsignor Guido Marini, Genoese, 42 years old, thus describes to the "Riformista" his arrival, last October, at the Vatican to assume the post of Master of the Liturgical Celebrations of the Pope. An appointment which allows him to work in close contact with Benedict XVI. "That which I have perceived at the beginning of my new assignment - he tells - I have found confirmed exactly every time I have had the grace to encounter the Holy Father. These encounters have been and are always for me a cause of great joy and great emotion. I would never have thought, having been an attentive reader and appreciator of Cardinal Ratzinger, that one day I would have the grace to be as close to him as I am now. And then, every time, together with the profound reverence which inspires in me the figure of the Pope, I experience his serene, gentle, fine and delicate manner of dealing with people which fills my heart with joy and which invites me to exert myself with all my energy to collaborate with generosity, humility and fidelity in the exercise of his Magisterium in the liturgical sphere, as far as pertains to my competences."

The office of Master of the Liturgical Celebrations of the Pope is important because, if it is true that lex orandi lex credendi (the Church believes in that which She prays [Rodari's translation]), then to direct the papal ceremonies with rigour and faithfulness to the norms is a help to the Faith of the entire Church. "The liturgy of the Church - explains Marini -, with its words, gestures, silences, chants and music causes us to live with singular efficacy the different moments of the history of Salvation in such a way that we become really participant in them and transform ourselves ever more into authentic disciples of the Lord, walking again in our lives along the traces of Him who has died and risen for our salvation. The liturgical celebration, if it is truly participated in, induces to this transformation which is the history of holiness."

And a help in this "transformation" can be that "repositioning" of the Cross in the centre of the altar, which has been carried out in the papal liturgies, as a residue [Rodari's word] of the old "orientation towards orient" of churches: 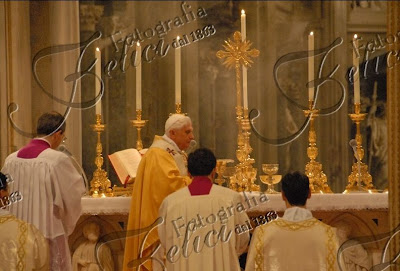 towards the rising Sun, Him who is coming. "The position of the Cross at the centre of the altar - says Marini - indicates the centrality of the Crucified in the eucharistic celebration and the precise interior orientation which the entire congregation is called to have during the eucharistic liturgy: one does not look at each other, but one looks to Him who has been born, has died and is risen for us, the Saviour. From the Lord comes the salvation, He is the Orient, the Sun which rises to whom we all must turn our gaze, from Whom we all must receive the gift of grace. The question of liturgical orientation, and also the practical manner in which it takes shape, is of great importance, because through it is conveyed a fundamental fact, at once theological and anthropological, ecclesiological and relevant for the personal spirituality."

A "repositioning", that of the Cross, which exposes how the liturgical practices of the past must also live today. "The liturgy of the Church - says Marini -, as incidentally all her life, is made of continuity: I would speak of development in continuity. This means that the Church proceeds on her way through history without losing sight of her own roots and her own living tradition: this can require, in some cases, also the recovering of precious and important elements which have been lost, forgotten along the way and which the passing of time has rendered less shining in their authentic significance. When that happens it is not a return to the past, but a true and enlightened progress in the liturgical field." 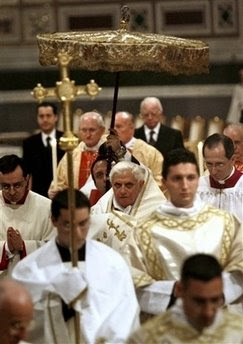 And in this progress it is impossible not to mention the Motu proprio Summorum Pontificum: "Considering attentively the Motu proprio, as well as the letter addressed by the Pope to the bishops of all the world to present it, a twofold precise understanding emerges. First of all, that of facilitating the accomplishing of "a reconciliation in the bosom of the Church"; and in this sense, as has been said, the Motu proprio is a most beautiful act of love towards the unity of the Church. In second place, and this is a fact which must not be forgotten, that [sc. understanding] of favouring a reciprocal enrichment between the two forms of the Roman rite: in such a way, for instance, that in the celebration according to the Missal of Paul VI (ordinary form of the Roman rite) 'can become manifest, more powerfully than has been the case hitherto, the sacrality which attracts many people to the ancient usage'."

These are important days for the Church. Days in which she relives the Passion, Death and Resurrection of the Lord. The days of Lent, of Holy Week and then of Easter: "Lent - he says - is a time of sincere conversion in a spiritual climate of austerity. An austerity which is not an end in itself, but directed at facilitating the recovering of what is truly essential in human life. And that which is truly essential, beyond everything, is God. That is why Lent is a privileged time of returning to God with all one's heart, by means of the threefold way of prayer, fast and almsgiving, as the page of the Gospel of Ash Wednesday recalls. It is the time in which we are called to relive interiorly, in the arch of the forty days, the experience of the ancient people of God wandering in the desert and the experience of temptation undergone by Jesus. Fundamentally, both these experiences take us back to a battle lived in order to find God and remain in intimate communion with Him, to preserve the primacy of His will in our life, not to allow that something else than Him have the capacity to annex the human heart. With Easter, on the other hand, new spiritual sceneries open themselves, coloured by exultant joy, by overabundant life, by luminous hope: because with the risen Christ, death is vanquished, sin and evil do not have the last word anymore on the life of man, the blessed eternity is a real prospect, life finds a fulfilled meaning, it is discovered that the Truth of the face of God is merciful Love without end."