Msgr. Marc Aillet, Bishop of Bayonne and former vicar General of Msgr. Dominque Rey, the excellent bishop of Fréjus-Toulon, has given a talk on "The Wounded Liturgy" at a recent theological conference at the Ponitifical Lateran University in Rome, on 11 March 2010. The NLM is pleased to present you a translation of that talk. 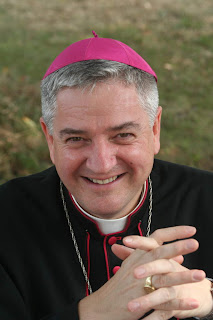 At the origin of the Liturgical Movement was the will of Pope Saint Pius X, especially in the motu proprio Tra le Sollecitudini (1903), to restore the liturgy and make its riches more accessible in order for it to become again the source of an authenticly Christian life, to underscore the challenge of a growing secularisation and to encourage the faithful to consecrate the world to God. Thence, the conciliar definition of the liturgy as "source and summit of the life and mission of the Church." Against all expectations, as has often been pointed out by Popea John Paul II and Benedict XVI, the implementation of the liturgical reform has sometimes lead to a kind of systematic desacralisation, while the liturgy was allowed to become ever more pervaded by the secularised culture of the surrounding world, thus losing its own nature and its identity: "This mystery of Christ the Church proclaims and celebrates in her liturgy so that the faithful may live from it and bear witness to it in the world" (CCC 1068).

Without denying the true fruits of the liturgical reform, one can say however, that the liturgy has been wounded by what John Paul II has defined as "unacceptable practices" (Ecclesia de Eucharistia, n. 10) and Benedict XVI denounced as "deformations which were hard to bear"(Letter to the Bishops on the occasion of the publication of the motu proprio Summorum Pontificum). Thus also the identity of the Church and of the priest was wounded.

In the years after the Council, we witnessed a kind of dialectical opposition between the defenders of liturgical worship and the promoters of the opening to the world. Because the latter ultimately reduced the Christian life to social efforts alone, based on a secular interpretation of the faith, the former, in reaction, took refuge in the pure liturgy up to "rubricism", with the risk of encouraging the faithful to protect themselves excessively from the world. In the Apostolic Exhortation Sacramentum Caritatis, Pope Benedict XVI puts an end to this controversy and reunites this opposition. The liturgical action must reconcile faith and life. Precisely as the celebration of the Paschal Mystery of Christ, made truly present among his people, the liturgy gives a Eucharistic form to the whole Christian life to make it a "spiritual worship pleasing to God." Thus, the commitment of the Christian in the world and the world itself, through the liturgy, are called to be consecrated to God. The commitment of the Christian in the mission of the Church and in society find, in fact, its source and its impulse in the liturgy, up to being drawn into the dynamism of the offering of love of Christ that is made present therein.

The primacy that Benedict XVI intends to give the liturgy in the Church - "Liturgical worship is the supreme expression of priestly and episcopal life," he told the bishops of France gathered in Lourdes on September 14, 2008, in an Extraordinary Plenary Assembly - wants to put adoration back at the center of the life of the priest and of the faithful. Instead and in place of "secular Christianity" that has often accompanied the implementation of the reform of the liturgy, Pope Benedict XVI intends to promote a "theologal Christianity" , the only one able to serve what he has called the priority that predominates in this phase of history, i.e. "to make God present in this world and to give people access to God" (Letter to the Bishops of the Catholic Church, March 10, 2009). Where, in fact, better than in the liturgy, does the priest deepen his identity, so well defined by the author of Hebrews: "For every high priest taken from among men, is ordained for men in the things that appertain to God, that he may offer up gifts and sacrifices for sins."(Heb 5, 1)?

The opening to the world called for by Vatican II has often been interpreted, in the years after the Council, as a sort of "conversion to secularisation": This attitude was not lacking in generosity, but it led to obscuring the importance of the liturgy and to minimise the need for observing the rites, which were considered too distant from the life of the world which had to be love and with whom one had to be fully connected, up to being fascinated by it. The result was a grave crisis of identity of the priest who could no longer perceive the importance of the salvation of souls and the need to announce to the world the newness of the Gospel of Salvation. The liturgy is, without doubt, the privileged place of deepening the identity of the priest, called to "fight the secularization"; for, as Jesus says, in his priestly prayer: "I pray not that thou shouldst take them out of the world, but that thou shouldst keep them from evil. They are not of the world, as I also am not of the world. Sanctify them in truth. Thy word is truth." (John 17, 15-17).

This certainly will be possible through a more rigorous observation of the liturgical norms that preserve the priest from the requirement, even the unconscious one, to draw the attention of the faithful on his person: the liturgical ritual which the celebrant is called to receive filially from the Church in fact allows the faithful to come more easily to the presence of Christ the Lord, of which the liturgical celebration must be a telling sign, and which must always come first. The liturgy is wounded when the faithful are left to the arbitrariness of the celebrant, his quirks, his personal ideas or opinions, to his own wounds. Hence also follows the importance of not banalising the rites which, tearing us away from the secular world and thus from the temptation of immanentism, have the gift to immerse us suddenly in the Mystery and open ourselves to the Transcendent. In this sense, one can never stress enough the importance of the silence preceding the liturgical celebration, an inner narthex, where we are freed of the concerns, even if legitimate, of the secular world, in order to enter the sacred space and time where God will reveal his Mystery; [sc. one can never stress enough the importance] of silence in the liturgy to open oneself more readily to the action of God; and [sc. one can never stress enough] the appropriateness of a period of thanksgiving, integrated or not into celebration, to apprehend the inner extent of the mission that awaits us, once we were back in the world. Teh obedience of the priest to the rubrics is also itself a silent and eloquent sign of his love for the Church of which he is but the minister, i.e. the servant.

Hence also the importance of the formation of future priests in the liturgy and especially in the interior participation, without which the outward participation advocated by the reform would be soulless and would favor a partial understanding of the liturgy that would express itself in terms of excessive theatricalisation of the roles, reductive cerebralisation of the rites and abusive self-celebration of the assembly. If active participation, which is the operating principle of the liturgical reform, is not the exercise of the "supernatural sense of faith," the liturgy is no longer the work of Christ, but of men. Stressing the importance of liturgical formation of priests, Vatican Council II made the liturgy one of the main subjects of ecclesiastical studies, avoiding reducing it to a purely intellectual formation: in fact, prior to being an object of study, the liturgy is living, or rather, is "to transcend one's own life to merge into the life of Christ." It is the ultimate immersion of all Christian life: immersion in the sense of faith and in the sense of the Church, in praise and in adoration, as in the mission.

We are therefore called to a true "Sursum corda". The phrase from the preface, "lift up your hearts", introduces the faithful to the heart of hearts of the liturgy: Christ's Passover, that is, his passing from this world to the Father. The meeting of the Risen Jesus with Mary Magdalene on the morning of the Resurrection, is very significant in this sense: with his "Noli me tangere" Jesus invites Mary Magdalene to "look to the realities of the highest", making her realise in her heart that he is not yet ascended to the Father and requesting her to go and tell his disciples that he must go up to his God and our God, his Father and our Father. The liturgy is exactly the place of this elevation, this stretching towards God which gives life a new horizon, and thereby its decisive orientation. Provided that we do not regard it as material available to our all too human manipulations, but that we observe, with filial obedience, the prescriptions of Holy Church.

As Pope Benedict XVI stated in the conclusion of his homily on the Solemnity of Saints Peter and Paul in 2008: "When the world as a whole will have become liturgy of God, when in its reality it will have become worship, then it will have achieved its goal, then will it be safe and sound.