Cardinal Dario Castrillon Hoyos: Pope Benedict XVI would like every Catholic parish in the world to celebrate a regular Tridentine-rite Mass, a Vatican cardinal has said. 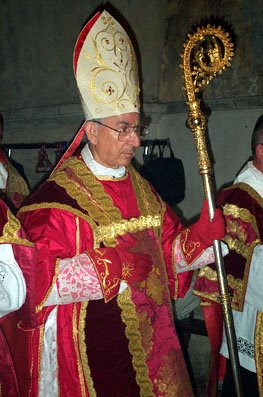 Pope Benedict XVI would like every Catholic parish in the world to celebrate a regular Tridentine-rite Mass, a Vatican cardinal has said.

Pope Benedict XVI would like every Catholic parish in the world to celebrate a regular Tridentine-rite Mass, a Vatican cardinal has said.

Cardinal Dario Castrillon Hoyos also told a June 14 press conference in London that the Vatican was writing to all seminaries to ask that candidates to the priesthood are trained to celebrate Mass according to the extraordinary form of the Latin rite, also known as the Tridentine Mass, restricted from the 1970s until July 2007 when Pope Benedict lifted some of those limits.

The cardinal, who was visiting London at the invitation of the Latin Mass Society, a British Catholic group committed to promoting Mass in the Tridentine rite of the 1962 Roman Missal, said it was "absolute ignorance" to think that the pope was trying to reverse the reforms of the Second Vatican Council by encouraging use of the rite.

"The Holy Father, who is a theologian and who was (involved) in the preparation for the council, is acting exactly in the way of the council, offering with freedom the different kinds of celebration," he said.

"The Holy Father is not returning to the past; he is taking a treasure from the past to offer it alongside the rich celebration of the new rite," the cardinal added.

When asked by a journalist if the pope wanted to see "many ordinary parishes" making provision for the Tridentine Mass, Cardinal Castrillon, a Colombian, said: "All the parishes. Not many, all the parishes, because this is a gift of God.

"He (Pope Benedict) offers these riches, and it is very important for new generations to know the past of the church," said Cardinal Castrillon, president of the Pontifical Commission "Ecclesia Dei," which works to help separated traditionalist Catholics return to the church.

"This kind of worship is so noble, so beautiful," he said. "The worship, the music, the architecture, the painting, makes a whole that is a treasure. The Holy Father is willing to offer to all the people this possibility, not only for the few groups who demand it but so that everybody knows this way of celebrating the Eucharist in the Catholic Church."

He also said his commission, which also is responsible for overseeing the application of "Summorum Pontificum," the 2007 papal decree authorizing the universal use of the Tridentine rite, was in the process of writing to seminaries not only to equip seminarians to celebrate Mass in Latin but to understand the theology, the philosophy and the language of such Masses.

The cardinal said parishes could use catechism classes to prepare Catholics to celebrate such Masses every Sunday so they could "appreciate the power of the silence, the power of the sacred way in front of God, the deep theology, to discover how and why the priest represents the person of Christ and to pray with the priest."

In "Summorum Pontificum," Pope Benedict indicated that Tridentine Masses should be made available in every parish where groups of the faithful desire it and where a priest has been trained to celebrate it. He also said the Mass from the Roman Missal in use since 1970 remains the ordinary form of the Mass, while the celebration of the Tridentine Mass is the extraordinary form.

The document did not require all parishes to automatically establish a Tridentine Mass schedule, but it said that where "a group of faithful attached to the previous liturgical tradition exists stably," the pastor should "willingly accede" to their request to make the Mass available.

Cardinal Castrillon told the press conference, however, that a stable group could mean just three or four people who were not necessarily drawn from the same parish.

Later in the day, Cardinal Castrillon celebrated the first pontifical high Mass in the Tridentine rite in London's Westminster Cathedral in 39 years. The event drew a congregation of more than 1,500 people, including young families. None of the English or Welsh bishops attended.