Why the Mass should be in Latin 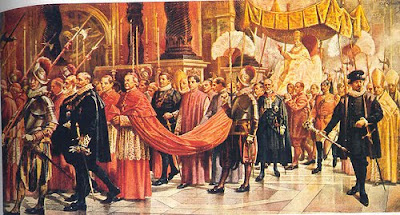 Why Latin is used. "Why does the Catholic Church use Latin? Why does she not conduct her services in a language which can be understood by all those who are present at them?" These are sensible questions, frequently asked; and every Catholic should be able to give a satisfactory answer.


The Church makes Latin the language of her liturgy becauase it was the official language of the Roman Empire, and was generally understood and spoken throughout a considerable part of the civilized world, at the time when Christianity was established. St. Peter fixed the centre of the Chirstian faith in Rome, the capital city of the Empire, and the Church gradually adopted the language of the Romans, and finally used it in many parts of the world over which she extended her dominion.
Latin however, was far from being the sole language of the Roman Empire. At the time of Christ and for two or three centures afterwards many other tongues were spoken extinsively in various provinces and Latin, as a vernacular, was confined more or less to central Italy. In northern Italy, Gaul and Spain there was a kind of Celtic; in Germany, Teutonic; but the most widespread language was Greek. It was spoken in Greece, Thessaly, Macedonia and Asia Minor, in Marseilles and the adjacent territories, in southern Italy and Sicily, and in parts of Africa. Moreover, Greek was everywhere the language of culture, and ever educated Roman was supposed to know it. Latin remained the language of worship, of the law, the army and the government; but Greek became the great medium of communication among the various parts of the mighty empire. The fact that it had become common among the Jews, both in Palestine and elsewhere, led to the making of the Septuagint version of the Old Testament and the wwriting of nearly all the New Testament in Greek- for even the Epistle to the Romans was written in that language, although one would think that Romans would better understand Latin. The first Fathers of the Church all wrote in Greek-even those who were addressing Roman readers or the Roman Emperor; and the Popes of the first two centuries used the same language when they wrote at all.

The Official Language of Rome
All this goes to show that, contrary to the opinion usually advanced, Latin was not spoken generally throughout the Empire at the time of the establishment of Christianity, and it was not adopted by the Church because "she wished to worship in the language of the people." But as said above, it was the language of worship, of government and of law; and the Church, which had fixed her seat of government in the imperial city, took it as her official tongue for the same purposes.
How did this come about? Because any other course would have been impracticable, and perhaps impossible.
The great centre of missionary enterprise in the west of Europe was Rome, and the priests who went to preach the Gospel were accustomed to say Mass in Latin. When they began their work in any country they had to learn the language; and when they had succeeded in doing so, they often found it too crude, too wanting in words, for the purpose of religious service. Therefore it was necessary to employ the Latin tongue for the public ceremonies of the Church, and the local language or dialect was used only for the instruction of the people.

The Language of Medieval Literature
In course of time Latin became the literary language of western Christendom, because it was familiar to the clergy, who were the educated class in a time of chaos; because it was equally useful in any part of the world, no matter what was the native tongue of the people; and because it was a convenient means of communication between the bishops and the See of Rome.
And so everybody was content to use it, and the people of every nation in western Europe worshipped in Latin, until in the sixteenth century the so-called Reformers began their destructive work- and the people of Germany, of Engalnd and of the nerthern nations were led away from the old faith and were formed into national churches, each holding its services in the language of the country.

Why not Have Mass in English?
"But would it not be better for the Catholic Church to conduct its worship in a language understood by the worshippers?" Yes and no. The advantages of so doing are plausible in theory; the disadvantages render the idea difficult and even totally impracticable.
We do not intend to deny that, in the abstract, a service in the language of the country would be very useful-possibly preferable to a service in an unknown tongue; but the difficulties in the way of such action are so great that the Catholic Church has wisely persevered in offering her public worship in one language over the greater part of the world. Any other tongue than Latin is used only in certain Eastern rites- in communities which were never in close contact with Rome, and which have used Greek or Syriac or Arabic from the beginning of their history. Even in these the language employed in divine worship is not the spoken language of today, but an older form which is as unintelligible to the worshippers as Latin is to the average layman of our parishes.
"But why cannot the Catholic Church use English in England and French in France?" etc. Because she is a universal Church. A small sect or a "national church" can use the languages of the country in its worship. But the Catholic Church is not a national church. [Someone tell the Bishops' conferences] She has been appointed to "teach all nations." She is not the Church of the Italian, or of the Englishman, or the Spaniard. She could of course translate her liturgy into any tongue, but a Mass in the language of any one nationality would be unintelligible to all the rest.
At present a priest can say Mass, privately or publicly in almost any church in the whole world. If Mass was to be said in the language of the country only, he could celebrate only in private, and he would be forced to bring his own Mass-Book and server. Such a system (or lack of system) [!] would be unworkable in the Catholic Church-because she is Catholic.
Although in the course of centuries the Latin of Gaul was gradually modified into French, that of Italy into Italian and that of Iberia into Spanish and Portuguese, the Church did not attempt to follow these changes in her language of worship. Nor has she tried to translate her liturgy into the myriad of tongues of the nations and tribes that have come inter her fold. She has deemed it wise to retain the use of Latin in her worship and her legislation.

Unity of Speech and of Faith
How well, in the Catholic Church, her oneess of speech seems to typify her unity of faith. More than that-it not only typifies but helps to preserve it. We can readily understand that it is of the utmost importance that the dogmas of religion should be defined with great exactness, in a language that always conveys the same ideas. Latin is what we call a dead language-that is, not being in daily use as a spoken tongue, it does not vary in meaning.
It is very convenient for the Church to have Latin as her official language, as a means of communication between her members and her head. To legislate for the Church's good it is necessary from time to timeto hold a General Council, at which the bishops of all the world assemble. They all understand Latin; no interpreter is required. Every bishop writes often to Rome and goes at intervals to visit the Holy Father; and if there were no common language used in the Church, the Vicar of Christ would need to be familiar with more than the tongues of Pentecost if he would understand the German, the Spaniard, the Slav, the Japanese or the countless others of many races to whom he would be obliged to listen. [Moreover think of the current translation nightmares plaguing the Vatican at every turn]
"But do not the people suffer by this method?" No; they are instructed in religion in their own native tongue, whatever it may be-and we venture to say that, on the average, taking them as they are all over the world, our Catholic people know their religion at least as well as the Anglican or the Baptist. But the ceremonial of the Church is carried out in the grand old language of Imperial Rome, where the Prince of the Apostles established the central government of Christ's kingdom upon earth-a government which has endured while other kingdoms have risen and decayed and died-from which the light of God's truth has shone farther and farther, century after century, into the dark places of the earth.