VEN. PIUS XII: the divine Redeemer has so willed it that the priestly life begun with the supplication and sacrifice of His mortal body should continue without intermission down the ages in His Mystical Body which is the Church.

Venerable Brethren,
Health and Apostolic Benediction.
Mediator between God and men[1] and High Priest who has gone before us into heaven, Jesus the Son of God[2] quite clearly had one aim in view when He undertook the mission of mercy which was to endow mankind with the rich blessings of supernatural grace. Sin had disturbed the right relationship between man and his Creator; the Son of God would restore it. The children of Adam were wretched heirs to the infection of original sin; He would bring them back to their heavenly Father, the primal source and final destiny of all things. For this reason He was not content, while He dwelt with us on earth, merely to give notice that redemption had begun, and to proclaim the long-awaited Kingdom of God, but gave Himself besides in prayer and sacrifice to the task of saving souls, even to the point of offering Himself, as He hung from the cross, a Victim unspotted unto God, to purify our conscience of dead works, to serve the living God.[3] Thus happily were all men summoned back from the byways leading them down to ruin and disaster, to be set squarely once again upon the path that leads to God. Thanks to the shedding of the blood of the Immaculate Lamb, now each might set about the personal task of achieving his own sanctification, so rendering to God the glory due to Him.

2. But what is more, the divine Redeemer has so willed it that the priestly life begun with the supplication and sacrifice of His mortal body should continue without intermission down the ages in His Mystical Body which is the Church. That is why He established a visible priesthood to offer everywhere the clean oblation[4] which would enable men from East to West, freed from the shackles of sin, to offer God that unconstrained and voluntary homage which their conscience dictates.

3. In obedience, therefore, to her Founder's behest, the Church prolongs the priestly mission of Jesus Christ mainly by means of the sacred liturgy. She does this in the first place at the altar, where constantly the sacrifice of the cross is represented[5] and with a single difference in the manner of its offering, renewed.[6] She does it next by means of the sacraments, those special channels through which men are made partakers in the supernatural life. She does it, finally, by offering to God, all Good and Great, the daily tribute of her prayer of praise. "What a spectacle for heaven and earth," observes Our predecessor of happy memory, Pius XI, "is not the Church at prayer! For centuries without interruption, from midnight to midnight, the divine psalmody of the inspired canticles is repeated on earth; there is no hour of the day that is not hallowed by its special liturgy; there is no state of human life that has not its part in the thanksgiving, praise, supplication and reparation of this common prayer of the Mystical Body of Christ which is His Church!"[7]

4. You are of course familiar with the fact, Venerable Brethren, that a remarkably widespread revival of scholarly interest in the sacred liturgy took place towards the end of the last century and has continued through the early years of this one. The movement owed its rise to commendable private initiative and more particularly to the zealous and persistent labor of several monasteries within the distinguished Order of Saint Benedict. Thus there developed in this field among many European nations, and in lands beyond the seas as well, a rivalry as welcome as it was productive of results. Indeed, the salutary fruits of this rivalry among the scholars were plain for all to see, both in the sphere of the sacred sciences, where the liturgical rites of the Western and Eastern Church were made the object of extensive research and profound study, and in the spiritual life of considerable numbers of individual Christians. 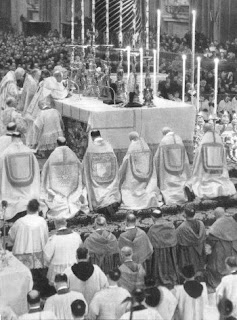 5. The majestic ceremonies of the sacrifice of the altar became better known, understood and appreciated. With more widespread and more frequent reception of the sacraments, with the beauty of the liturgical prayers more fully savored, the worship of the Eucharist came to be regarded for what it really is: the fountain-head of genuine Christian devotion. Bolder relief was given likewise to the fact that all the faithful make up a single and very compact body with Christ for its Head, and that the Christian community is in duty bound to participate in the liturgical rites according to their station.

6. You are surely well aware that this Apostolic See has always made careful provision for the schooling of the people committed to its charge in the correct spirit and practice of the liturgy; and that it has been no less careful to insist that the sacred rites should be performed with due external dignity. In this connection We ourselves, in the course of our traditional address to the Lenten preachers of this gracious city of Rome in 1943, urged them warmly to exhort their respective hearers to more faithful participation in the eucharistic sacrifice. Only a short while previously, with the design of rendering the prayers of the liturgy more correctly understood and their truth and unction more easy to perceive, We arranged to have the Book of Psalms, which forms such an important part of these prayers in the Catholic Church, translated again into Latin from their original text.[8] 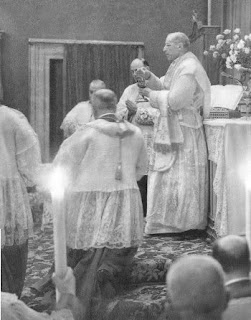 7. But while We derive no little satisfaction from the wholesome results of the movement just described, duty obliges Us to give serious attention to this "revival" as it is advocated in some quarters, and to take proper steps to preserve it at the outset from excess or outright perversion.
8. Indeed, though we are sorely grieved to note, on the one hand, that there are places where the spirit, understanding or practice of the sacred liturgy is defective, or all but inexistent, We observe with considerable anxiety and some misgiving, that elsewhere certain enthusiasts, over-eager in their search for novelty, are straying beyond the path of sound doctrine and prudence. Not seldom, in fact, they interlard their plans and hopes for a revival of the sacred liturgy with principles which compromise this holiest of causes in theory or practice, and sometimes even taint it with errors touching Catholic faith and ascetical doctrine.
9. Yet the integrity of faith and morals ought to be the special criterion of this sacred science, which must conform exactly to what the Church out of the abundance of her wisdom teaches and prescribes. It is, consequently, Our prerogative to commend and approve whatever is done properly, and to check or censure any aberration from the path of truth and rectitude.