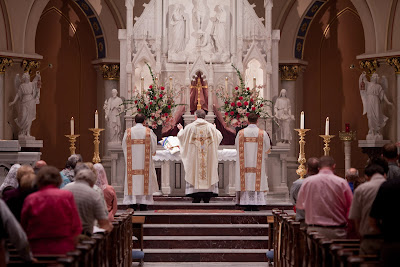 As some of you will recall, on Sunday, June 24, 2012 at our normal 12:10 PM Sunday Mass, we celebrated the Solemnity of the Nativity of Saint John the Baptist ad orientem. You can review it here:

At this Mass, we had our Men's Schola sing the parts of the Mass in Latin but we encouraged the congregation to join. Most of the people at the Mass knew the Kyrie, Gloria and Sanctus. They were unfamiliar though with the Credo and at that time, we did not have it available for them as our hymnal didn't have it. Nor did most know that particular Agnus Dei that was sung, although they do know the Jubilatio version.

Our new St. Michael hymnal had Credo III both in Latin and in English and eventually our 9:30 AM and 12:10 PM Masses will learn it in English.

But as a result of this Mass and as a part of our celebration of the 50th anniversary of the opening of the Second Vatican Council and the 20th anniversary of the issuing of the Cathechism of the Catholic Church and as a part of our parish's celebration of the Year of Faith, which we opened with the Solemn Recitation of the Most Holy Rosary within the context of Exposition and Benediction of the Most Blessed Sacrament, we will implement this Sunday, October 14, 2012, the 28th Sunday in Ordinary Time the following heaven and earth rattling reform (DRUM ROLL PLEASE):

THE LITURGY OF THE EUCHARIST WILL BE CELEBRATED AD ORIENTEM AT THE 12:10 PM ORDINARY FORM MASS ONLY AND EVERY SUNDAY!!!!!!!!!!!!!!!
Apart from that, we will not make any radical changes to the way we sing the Mass in English and it is a Mass that is completely sung including the priest's parts beginning with the Sign of the Cross through the Final Blessing.

At all our Sunday Masses, the Official Introit found in the Roman Missal as well as the Offertory and Communion Antiphons are chanted. As the Procession begins the official Introit is chanted and then blends into the congregational processional hymn.

The Introductory and Concluding Rites of the Mass will be at the priest's chair to the side of the altar as in the Ordinary Form. The Liturgy of the Word will be as it normally is at all our Masses.

It will be The Liturgy of the Eucharist only, beginning with the Offertory, that will be Ad Orientem.