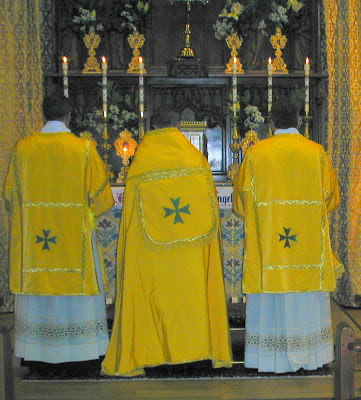 I'm recovering from a hectic weekend as the Order of St Lazarus - Grand Priory of Great Britain - held its annual Investiture here. We received three new members into the Order and received a transfer (to borrow a footballing phrase) from one of the other Green Cross organisations, the Much Honoured Baron of Horsbrugh, Michael Chenery of Horsbrugh.

It was a good opportunity to pass on the good news to members who did not travel to Prague recently to see Cardinal Duka invested in the Order as the Chaplain General for the whole Order, at the splendid St Vitus Cathedral, in the presence of the Papal Nuncio. See here and here.

Sometimes there is a little confusion about the Order of St Lazarus, as there are several groups claiming the name but with Cardinal Duka as our highest ranking cleric, we are now the only one with a Cardinal, thus cementing a firm link with the Catholic Church. Again, as the order styles itself as ecumenical, this can sometimes be a cause of confusion to people - this really means that it has always in its tradition been a Catholic Order but one that admits non-Catholics into its ranks, although the Grand Master is always a Catholic as is the senior cleric, either under spiritual protection, or in this case as Chaplain General. The ecumenical part has of course grown in the modern history of the Order but this stems back in the order's tradition, where it has a history of admitting non-Catholics. It is also unusual in that women were first admitted in 1287.

Our present grand master, Jan Count Dobrzenský z Dobrzenicz has been very keen to enhance our traditional link with the Church, so for example, in several countries the Order is now recognised as a Pious Union by the Catholic Church and there is a strong insistence throughout the Order that, unlike some of the other green cross organisations, members are forbidden to be Freemasons (again to be in line with the teachings of the Catholic Church). He has also worked very hard for the Order to recently become an NGO in Luxembourg and to be granted Consultative Status at the United Nations. You can read more about the Order at its international site and on our British site. Anyone interested in learning further details about the Order or interested in becoming a member should use the links page on the sites to contact the Grand Secretary internationally or here in Great Britain.

As to the rest of the weekend here, after the Vigil Service on Friday evening, to invoke the Holy Spirit for the Investiture, we presented a cheque for £1,000 to Mr Norman Cutler, representing St Catherine's Hospice here in Leyland.. The Hospice is the British charity we are supporting this year (the international one being SUROL - a leprosy charity under the patronage of Malcolm Cardinal Ranjith, for which we have raised £9,000).

Mr Norman Cutler - pictured receiving the cheque from our Grand Prior and with other members.

Afterwards, we held a Charity Dinner at Farington Lodge - conveniently just next door. 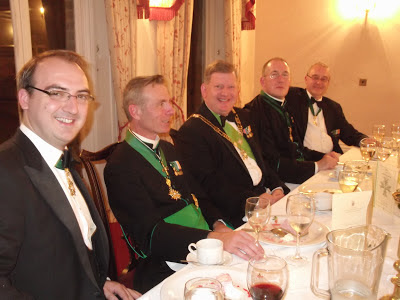 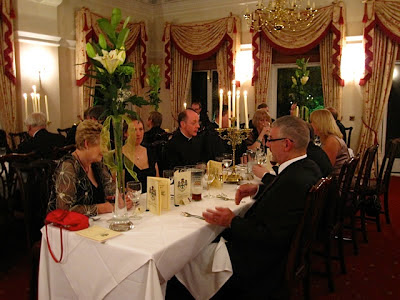 No rest on Saturday, though, as we celebrated High Mass with the help of a small Schola singing Casali's Mass in G, followed by the Investiture of new members and a Gala Lunch. Just as well there were one or two other priests stying on for Sunday to lend me a hand at the Parish Masses! 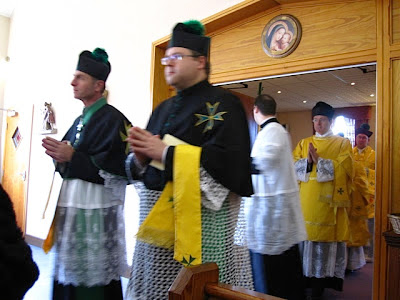 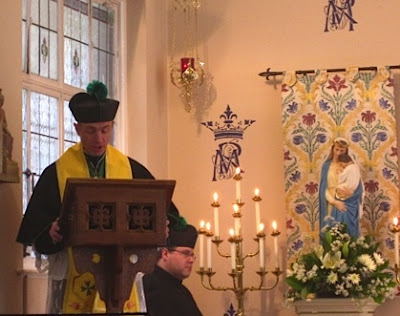 Preaching on st Edward the Confessor, the feast of the day. 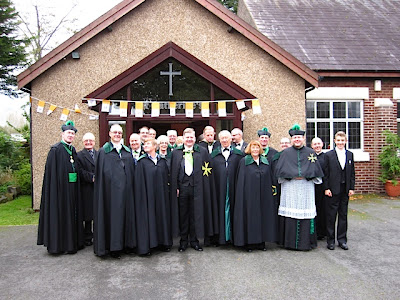 Some of the members pictured after Mass.