A few photos from Cardinal Castrillon Hoyos' Solemn Pontifical Mass in Rome by Shawn Tribe
Teaser photos of the 20th FSSP anniversary events of this past weekend are coming out of Rome now.

Basilica of the Holy Blood, Bruges

by Shawn Tribe
A reader from Belgium sent in this link to photos of a Mass that was celebrated today, the Feast of Christ King, by Fr. A. Komorowski FSSP in the Basilica of the Holy Blood in Bruges.

The fact of the Mass is spectacular of course, but I particularly wished to highlight the church art and architecture. Some of the most beautifully decorated churches are to be found in Northern Europe.

by Shawn Tribe
The NLM recently shared with you a video clip from the Solemn Mass offered at the Toronto Oratory's Holy Family Church. Here, as promised, are the photographs from the event.

(This is, incidentally, how a free-standing altar should be incensed in the usus antiquior; an oft forgotten rubric)

by Gregor Kollmorgen H.E. Athanasius Schneider ORC, auxiliary bishop of Karaganda, Kazakhstan, and well known to NLM readers from his book "Dominus est" in favour of a return to the traditional practice of receiving Holy Communion directly on the tongue while kneeling, recently celebrated Low Mass in the Roman chruch of Gesù e Maria, Via del Corso, where the Apostolate of the Institute of Christ the King in Rome has its Sunday Mass. This apostolate, by the way, after having been present in Rome for over 15 years, has now been canonically erected by the Vicariate of Rome. The images of this Mass also show some of the ceremonial before and after Mass, recently addressed by Shawn. 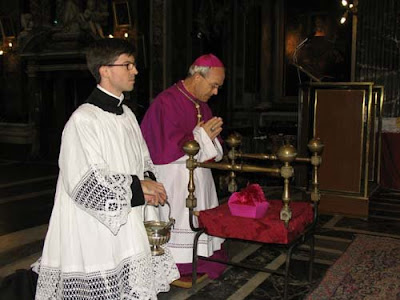 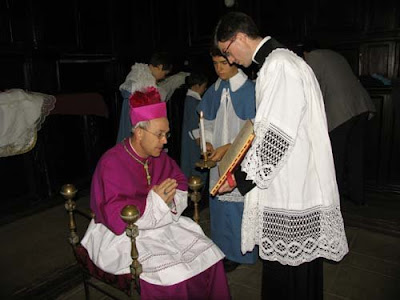 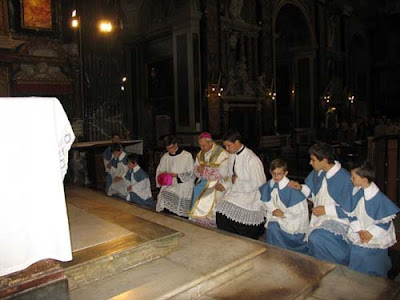 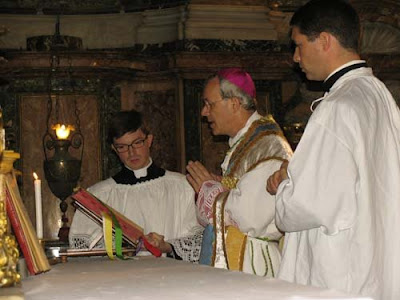 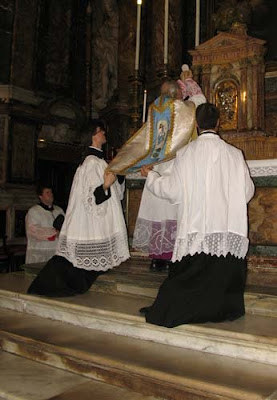 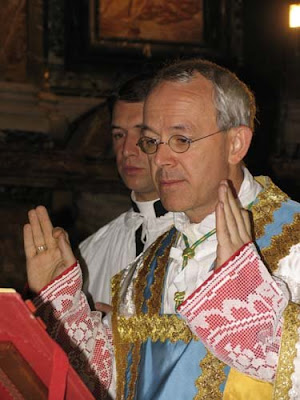 by Shawn Tribe
Lost Lambs has some photographs up of the consecration of Old St. Patrick's Oratory in Kansas City, Mo. that took place yesterday. The parish is an apostolate of the Institute of Christ the King.

Here are a few images from this relatively rare ceremony with some brief explanation of what is being pictured -- though I should note that this is not intended to be a full commentary upon the entire ceremonial surrounding the consecration of a church.

In the iniital parts of the ceremony, purple vestments are used. Later in the ceremony of consecration, these will be switched to white/gold.

Here the bishop sprinkles the interior of the church with "Gregorian water" as is used in the consecration of a church. Gregorian water is different from typical holy water, being water that contains wine, salt, and ashes and uses a special formula for its blessing. The name comes from the fact that its use was prescribed by St. Gregory the Great.

From the Catholic Encyclopedia:

In one of the most intriguing aspects of the consecration rites, the bishop inscribes the Greek and Latin alphabets into sand put into the form of a cross upon the floor of the church. Apparently early sermons make reference to this practice, speaking to its antiquity.

Here is the form:

As for the meaning of this, the Catholic Encyclopedia suggests the following:

The "Liber Sacramentorum" of St. Gregory I and the "Pontifical" of Egbert, Archbishop of York, attest the antiquity of this ceremony, which symbolized the instruction given to the newly baptized in the elements of faith and piety. The crossing of the two lines points to the cross, that is Christ crucified, as the principal dogma of the Christian religion. The Greek and Latin languages represent the Jews and Gentiles respectively. The Greek alphabet is written first because the Jews were first called to the Christian Faith.

Reference is made elsewhere to the symbolism of this in relation to the Word of God and to the Gospel.

The photos now pick up upon the consecration of the building itself. Not pictured in Lost Lamb's photos is the solemn procession of the relics into the church and the corresponding ceremonial surrounding the altars. We continue with the anointing of the consecration crosses.

The bishop anoints twelve crosses on the interior walls of the church with Holy Chrism. These are then incensed and a lit candle is placed before each. If you go to many churches in Europe, particularly Rome, you will see these consecration crosses and candles upon the walls.

After the consecration rites are completed, Solemn Pontifical Mass is celebrated:

A French reader sent in a link to the following photos which were of extremely high quality, so they seemed worth showing in addition to what we have already.

(In the usus antiquior the Ordination Mass of a new priest was the one and only time one would see priests concelebrate the Mass.)

Other Events and Scenes

As promised, here are more photos from the Oxford Martyrs' Mass in Blackfriars, Oxford. The photos were taken by Mr Martin Beek, who is a friend of mine. As always, click on the photos to view a larger version. Seated at the Sedilia during the polyphonic 'Gloria' from Victoria's 'Missa trahe me post te'. Note that the Dominicans are vested with an apparelled amice. The Epistle was from Apocalypse 7:13-17, sung by the sub-deacon, fra' Lawrence Lew OP. The deacon, fra' David Rocks OP gives the Evengeliarum to the sub-deacon to support as he sings Luke 2:9-19. Bishop William Kenney CP, with an Oratorian brother and a Dominican father approach the Altar for Holy Communion. The Dominican friars come up for Holy Communion. The photo above is used, courtesy of Mr Joseph Nunan.

by Shawn Tribe
Rinascimento Sacro has some beautiful images up from the Solemn Pontifical Mass offered this past weekend, celebrated by the ordinary, Msgr. Mario Oliveri, Bishop of Imperia (Liguria, Italy).

During the rites, seven Franciscan sisters of the Immaculate made their solemn profession.

A view of the complete set of photographs will show the presence of Msgr. Amodeo, an Ambrosian canon of the Cathedral of Milan, the NLM's own Nicola de Grandi, as well as many of the faithful servers from Ss. Trinita in Rome. It looks to have been a glorious occasion.

You can also expect to see more photos of the event from John Sonnen who was one of those at this event.

Here are a few select photos from the event. (All photos are from Rinascimento Sacro.)