Cardinal Burke on Summorum Pontificum and the post-Conciliar liturgical reform 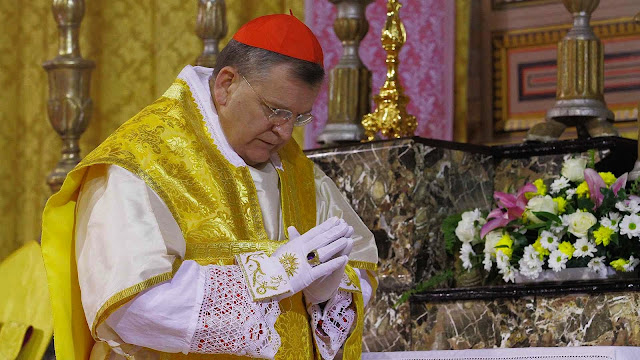 From the interview granted by Cardinal Burke, Prefect of the Supreme Tribunal of the Apostolic Signatura, to the May 2011 edition of French Catholic monthly La Nef:

La Nef – After over three years, what assessment can you make of the application of the motu proprio Summorum Pontificum ?

Cardinal Burke – In its application, I have ascertained an always increasing interest and appreciation for the extraordinary form of the Roman Rite, for the faithful in general and for young Catholics in particular. Excellent initiatives have taken place in order to promote acquaintance with the motu proprio and its objective, foreseen by the Holy Father when he promulgated it. I think of numerous individual talks as well as conferences on sacred liturgy, which have granted particular attention to the extraordinary form of the Roman Rite and to its relationship with the ordinary form. Additionally, several books and articles have been published, having as their aim a deep study of the motu proprio.
It is evident that the application of Summorum Pontificum has not taken place in a uniform fashion in the Church universal. In some places, its application has even faced resistence by the part of those who claim not to understand its goals and who defend that the motu proprio cannot be applied before the publication of the Instruction related to its application. I hope that the Instruction will be published shortly, so that the motu proprio may be applied in a more universal and more uniform way, according to the profound pastoral solicitude of our Holy Father for the sacred liturgy. To those who claim not to understand the intentions of Summorum Pontificum, I suggest a re-reading of the Letter to the Bishops, written by our Holy Father when it was promulgated, as well as the numerous writings of the Holy Father on sacred liturgy, published before and after his election to the Chair of Peter. I think, for instance, of his masterpiece: The Spirit of the Liturgy.
As far as I am concerned, the application of the motu proprio has allowed me to greatly develop and deepen my knowledge and love for the sacred liturgy, the highest expression of the faith and of the life of the Church. By re-reading the apostolic letter itself, as well as the accompanying Letter to Bishops of the Pope, I see how the Holy Father was inspired when grating to the universal Church this new liturgical discipline. I have myself been a personal witness to the good fruits of this new discipline.
As for the future, I am convinced that the faithful application of Summorum Pontificum will contribute to the true renewal of the sacred liturgy. That was the wish of the Fathers of the Second Vatican Council, but this was more or less betrayed by the way in which their teaching was put into practice after its closing. Cardinal Joseph Ratzinger, at the time, proposed numerous times a "reform of the reform", allowing for a full correction of the vague and erroneous interpretations of the Conciliar teaching on the sacred liturgy and the reception of the authentic magisterial teaching, for the greater glory of God and the sanctification of the faithful.