Cardinal Cañizares Interview on Three Years of Summorum Pontificum: It is now understood much better what the Motu proprio is about. The understanding of the liturgy in the tradition of the church has grown. The same is true of the hermeneutic of continuity. All this will benefit not only the acceptance and implementation of the motu proprio, but it also enriches the liturgical renewal and brings it forward - in the sense that the spirit of the liturgy is again revived. 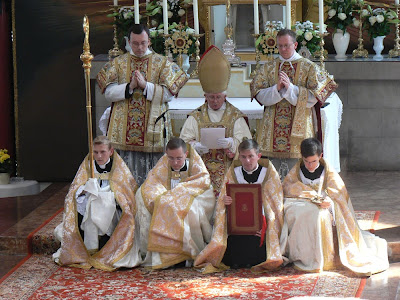 We have to turn around 180 degrees

Three years after the publication of the Motu proprio "Summorum Pontificum", the Prefect of the Roman Congregation for Divine Worship takes stock

Eminence, the Pope, in the letter to the world episcopate, spoke regarding the preliminary talks leading to the Motu proprio "Summorum Pontificum" of reactions of joyful acceptance to harsh opposition. Has the climate changed since then?


The climate has remained essentially the same. But I believe that a movement is under way. It is now understood much better what the Motu proprio is about. The understanding of the liturgy in the tradition of the church has grown. The same is true of the hermeneutic of continuity. All this will benefit not only the acceptance and implementation of the motu proprio, but it also enriches the liturgical renewal and brings it forward - in the sense that the spirit of the liturgy is again revived.

In France, two diocesan seminaries form their seminarians in both forms of the Roman rite. What do you think about this model?

There is only one liturgy. Consequently both forms of the celebration of the Roman rite fit with ease in the same formation - precisely because they are one and the same liturgy. It is also important to note that the Church, because of the hermeneutic of continuity, does not freeze the Missal of John XXIII, but has not broken with it either. The tradition of the Church is being further integrated in the development of the Second Vatican Council. Therefore, the liturgical education for all will always have to be aligned with Sacrosanctum Concilium. Given the richness of the Roman Rite in its entire traditions - and this includes the missal of John XXIII and the post-conciliar liturgical reform - both cannot be played off against each other. They are expressions of the same liturgical wealth.

Do you share the view of the Bishop of Toulon, who considers it to be ideal to form his seminarians in both forms?

The Bishop of Toulon, an excellent man, wants to view the whole tradition of the church in this light of the hermeneutic of continuity. And since Sacrosanctum Concilium is still valid, he implements this formation, unique in this form, in which the celebration is taught in both forms of the Roman rite. The good fruits in Toulon are evident.

The sense for the mystery and of the sacred, and above all the sense for what God's reign means. It is about the greatness of God and the mystery of God. Man really is always unworthy to share in this divine gift of the liturgy. We need again to acknowledge God's right, the "ius divinum" - the sooner the better. Today liturgy often appears as something that man has a right to and in which he acts. This reflects the secularisation of our society, while other aspects fade behind it. This has led to the reform of the Second Vatican Council not unfolding its wealth and greatness as hoped.

What do you recommend to the priests? Where should they start?

The priests should again prepare for Mass as provided in the extraordinary form. The same goes for the penitential rite and the awareness that we are essentially not worthy of celebration, but put our trust in the mercy and the forgiveness of God and thus approach God's presence in the celebration. A treasure that we must not forget is the offertory as it is described in the prayer texts [sc. of the extraordinary form]. That expresses a deep attitude. We should internalise it.

In his letter to the bishops the Holy Father has stressed that his aim with the motu proprio is the internal reconciliation of the Church. What do you think about the debate on the illicit ordinations of the Fraternity of St. Pius X?

The ordinations are an incisive element in a time of grave decisions. It would have been highly desirable to delay the ordinations, because if one day there is a real opportunity for an opening and a possibility of agreement, this chance may be hampered by the fact of the ordinations.

Regarding World Youth Day in Madrid in 2011: What do you recommend to young people who are curious about the old Mass?

The young people must be educated in the spirit of the liturgy. It would be a mistake to commit them to one or the other form in a polemical way. They need to be introduced to adoration and the spirit of the mystery. Praise and thanksgiving should be taught to them - and the whole which has made up the liturgical celebration of the Church throughout the ages. Today the young people are lacking above all in liturgical education - regardless of the form which they defend particularly. This is the great challenge for the near future, also for the Congregation for Divine Worship and the Discipline of the Sacraments. Today we need a new liturgical movement, as there was in the 19th and 20th Century. And this is not about one or the other form, but the liturgy as such.

And how can this new liturgical movement become a reality?

We need a new introduction to Christianity. Also for children and young people. An introduction to the liturgy does not only mean to know something about the celebration, although of course that is indispensable both theologically and doctrinally. Young people and children should participate in liturgies celebrated with great dignity, which are entirely permeated by the mystery of God in which the individual konws himself to be included. Active participation does not mean to do something, but to enter into the worship and the silence, into listening and also the prayer of petition and all that which really constitutes the liturgy. As long as that does not happen, there will be no liturgical renewal. We have to turn around one hundred eighty degrees. Youth ministry should be a place where the encounter with the living Christ in the Church takes place . Where Jesus Christ appears as someone of yesterday, neither liturgical education nor active participation is possible. As long as the awareness of the living Christ does not awake again, nothing will come of the much-needed renewal.
fonte:new liturgical movement