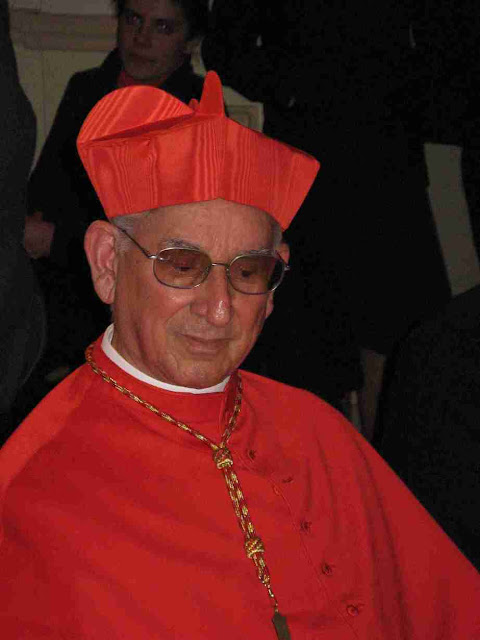 Cardinal Darío Castrillón Hoyos, President Emeritus of the Pontifical Commission Ecclesia Dei, Prefect emeritus of the Congregation for the Clergy, was born on 4 July 1929 in Medellín, Colombia. He was ordained for the diocese of Santa Rosa de Osos on 26 October 1952 following his theological studies at the Pontifical Gregorian University, Rome, where he also earned a doctorate in canon law. He also specialized in religious sociology, political economy and ethics in economy.

He served as a curate in two rural parishes, director of the Cursillo movement and delegate for Catholic Action. He also taught canon law at the Free Civil University and was General Secretary of the Colombian Bishops’ Conference.

On 2 June 1971, he was elected titular Bishop of Villa del re and Coadjutor of Pereira. He received episcopal ordination on 18 July 1971. On 1 July 1976 he succeeded as Bishop of Pereira.

As a Delegate of the Colombian Bishops’ Conference, he participated in the Latin American Bishops’ General Conferences held in Medellín (1968) and Puebla (1979).
From 1983 to 1987 he was General Secretary of the Latin American Episcopal Council (CELAM) and President of the same Council from 1987 to 1991.
He also took part in the IV General Conference of CELAM in Santo Domingo in October 1992.

Named Archbishop of Bucaramanga on 16 December 1992, he was called by the Holy Father to head the Congregation for the Clergy on 15 June 1996 as Pro-Prefect.

On 15 November 1996, he offered a splendid reflection by presenting the book "Dono e Mistero" of John Paul II. Also, as Pro-Prefect of the Congregation, he organized personally the celebration of John Paul II’s 50 years as priest.

On 18 September 1997, he presented the General Directory for Catechesis and on 17 October 1997 at the conclusion of the International Catechetic Congress, he presented to the Holy Father – the first catechist of the Church – the fruits of those intense days of work. The Congress was an eloquent sign of the need for announcing in an adequate way to the men of our time the Word of God in its integrity and purity.

During the Special Assembly for America of the Synod of Bishops held from 16 November to 12 December 1997 he served as President Delegate.

Created and proclaimed Cardinal by John Paul II in the consistory of 21 February 1998, of the Title of SS. Nome di Maria al Foro Traiano (Most Holy Name of Mary at the Trajan Forum), deaconry elevated pro hac vice to presbyteral title on 1 March 2008.

Congregations: for Bishops; for the Evangelization of Peoples; for Catholic Education; for Divine Worship and the Discipline of the Sacraments;
*

Pontifical Commission for Latin America;
* Administration of Patrimony of the Apostolic See (A.P.S.A.);
* Special Council for America of the General Secretariat of the Synod of Bishops.
fonte:vatican